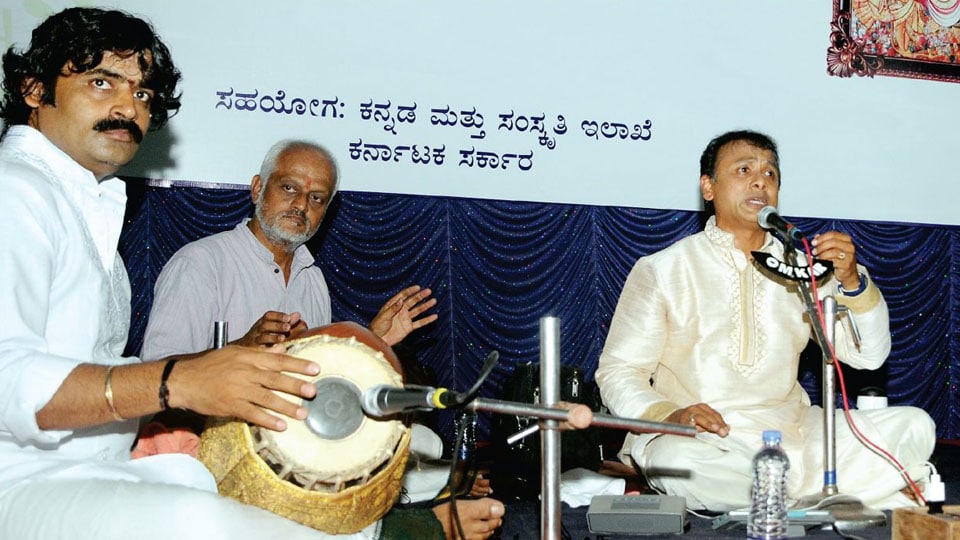 A treat of tuneful music concerts…

Sri Ramabhyudaya Sabha has been celebrating Ramanavami festival for many decades in its Rama Mandira on Vinoba Road in Shivarampet and for the last four years, changed the venue to a large spacious, well-built, rain-proof pandal in the Alamma Choultry premises which can accommodate over 500 enthusiasts seated on chairs to listen to the music programmes in a serene atmosphere. This year also, the Sabha, under the able stewardship of Dr. N. Sreeram, a leading pathologist of the city and his culturally-oriented colleagues, has organised an 11-day classical music festival by inviting top class artistes in the field to regale the classical music fraternity lovers to savour the divine music programmes. This said, now the programmes.

On the 5th inst, the classical artiste was the well-known Vid. P. Unnikrishnan, accompanied on violin by Vid. M.A. Sundaresan, on mridanga by Tumkur B. Ravishankar and on ghata by Vid. G.S. Ramanujam.

Vid. Unni Krishnan, accompanied on mridanga by Tumkur B. Ravishankar, on ghata by Vid. G.S. Ramanujam and on violin by Vid. M.A. Sundareshan, presenting a music concert in city as part of Ramanavami celebrations.

Vid. Unnikrishnan commenced his recital with Kriti. ‘Gajananayutham Ganeshwaram,’ followed by a Thyagaraja number ‘Needayarada’ in Vasantha Bhairavi raga, a swift and melodious presentation. Unnikrishnan has a melodious voice and a very pleasing personality which would take the connoisseurs to move along in his voyage. This is a special gift of the Lord on the artiste. The second number was in raga Kambodi well rendered. Then came ‘Paraku madade’ in Saveri, a Purandaradasa number in Kannada well rendered.

A brilliant Alapana followed in raga, ‘Saramathi’, a somber and beautiful number in itself set to low octaves. We were expecting the popular ‘Mokshamu Galada’ a famous Thyagaraja Kriti, but Unnikrishnan chose a Kannada song and shone in the same with flying colours. Language is only a medium of expression and it can be beautifully moulded into sombre and melodious music by a diligent artiste and Unni is no exception. It came out splendidly. Another Kannada number followed in quick succession in raga ‘Faras.’ ‘Charukeshi’ is a melodies raga and, the ever remembered with devotion, the great M.S. would many a time commence her programme with this beautiful Thyagaraja number ‘Ada modi kalasha’ in this raga. Unnikrishnan chose this raga and song for a very detailed treatment, tearing into the inner chords of this kriti with rich melody and diligence much to the enjoyment of the over 500 rasikas. Then came ‘Rama Rama Rama Enniro’ in Raga ‘Thelang’. ‘Pibare Ramarasam Rasane’ followed. Devotion flowed in full measure in the delineation of this number followed by ‘Rama Rama Rama Enniro’ in ‘Desh.’

Vid. Sundaresan, a product of the famous Parur lineage in the Violin family, gave beautiful support to the main artiste. Our own Tumkur Ravishankar on mridanga and Ramanujam on ghata ably acquitted themselves in their assignments.

On the 6th inst, the main artiste was Vid. Saketharaman. This young and charming man in his early thirties is a senior Vice-President in a Financial-cum-Computer related organisation and has chosen classical music as a secondary interest and is able to do full justice to both his avocations. Saketharaman, an young vocalist in great demand, was accompanied by Vidu. Akkarai Subhalakshmi on violin, Vid. K.U. Jayachandra Rao on mridanga and by Vid. Bhargav Halambi on khanjira.

Vid. Saketharaman commenced his concert with a Kannada number ‘Sharanu Siddhi, Vinayaka’ in Raga Nata set to Aditala. This number, rendered in quick mode, set the tone for the emerging contours of the programme that followed. The next number was in Tamil set to Mohana raga, Rupaka tala. ‘Mohana’ is a beautiful raga popularised by the legendary Veene Seshanna and as a matter of tribute to the great Veene Maestro, in earlier days vocal artistes, coming from the undivided Madras State (which included Andhra also), would always include this beautiful Raga in their repertory. Saketharaman included a long swara prasthara in his detailed delineation of the number with solid support from the accompanists.

The next number was in Shanmukapriya (Marivela Dhikku Everayya Rama) and in this, Saketharaman tore into all strands of this beautiful raga in the neraval (‘Sannu Thanga Sri….). That was a splendid treat. The accompanists gave solid support in this. ‘Kambhodi’ was the next raga with Kriti. ‘Emayya Ramayya’. ‘Bhairavi Raga’ was taken for RTP and the strings included were raga Saama, ‘Gangeya Bhushani’ a rare selection and ending with ‘Kapi.’ The brisk and eloquent rendering of this number flowed majestically like the sacred Ganga river. In this, Saketh got vibrant and beautiful support from violinist and percussionists.

The last number was ‘Mam Pahi Srirama’ in Kuranji, very well rendered. The over 500 strong crowd of connoisseurs sat through the concert in rapt attention and the rain God ‘Varuna’ blessed them all in full measure. The organisers had put up a water-proof pandal and there was’nt much discomfort. Thanks to them.

READ ALSO  A treat of fine arts for Ramanavami

On the 3rd day of the festival, the main artistes were Akkarai Sisters — S. Subhalakshmi and S. Sornalatha. In fact the Sisters are also proficient in violin and the elder one had accompanied Vid. Saketharaman on violin in the previous evening’s programme. The accompanists for the current programme were Vidu. Charulatha Ramanujam on violin, Vid. K.U. Jayachandra Rao on mridanga and by Vid. Bhargav Halambi on khanjira. It was a splendid music team in all respects. The Sisters commenced their vocal concert with a Pancharatna kriti. ‘Jagadananda Karaka’ by saint Thyagaraja, in Raga ‘Naata’. This rendering by the Sisters with all the long strands of this number diligently treated, set the tone for the wonderful treat that followed. The second number was a Maya Malavagoula number, followed by a Thyagaraja number in raga ‘Mano Ranjani.’ The pièce de résistance number in the programme was in fact in the Raga ‘Shubha Panthu Varali’ which was chosen for RTP and the Sisters did full justice in their rendering. The concert ended with a sloka. Totally it was a delightful prog.

On the 8th inst, the main vocal artiste was our own Vid. Pattabhirama Pandit, accompanied by Vid. T.K.V. Ramanujacharyulu on violin and Vid. Arjun Kumar on mridanga.

Vid. Pattabhi commenced his concert with a number ‘Bhajana Seveye’ in Kalyani and set the tone for wonderful numbers to come. This was followed by a Kriti in Raga ‘Sriranjani.’ The next number was ‘Thulasidala mulache santhoshamuga’ in Maya Malavagowla, well rendered. Bilahari Raga came next with ‘Paridhana Minchithe.’ This song was a favourite of the great ‘Chembai’ normally included in his concerts. The main raga was ‘Thodi’ which received detailed delineation in alapana, rendered beautifully. Vid. Pattabhi stole the show in his rendering of the alapana of this raga and when he reached the higher octaves of this number, his voice output was brilliant and showed his mastery over his chosen avocation.  The swara prasthara came out in all strands with excellent support from Ramanujacharyulu and Arjun Kumar. The rapport among the three was, beyond doubt, of a higher order and the discerning connoisseurs were greatly satisfied with the output.

Vid. Pattabhi then voyaged through a stream of Kannada numbers, all of which are gems in their own right. ‘Ennadu Thappa, Ninnadu Thappa’ a rare number in ‘Vagadi Shwari’ was the first in this series. The popular ‘Adisidalu Yashoda’ in ‘Kapi’ received wide applause, ‘Mishra peel’ was chosen for ‘Baro Krishna Ninna Bhakthara Manege’ which followed next. Raga ‘Telang’ was scripted for ‘Rama Rama Rama Enniro.’ The last piece was ‘Uyyala Lokavayya’ in raga ‘Nilambari.’  Vid. Pattabhi is undoubtedly among the top vocalists in the field of Karnatak music and an additional measure for his endearment to the local rasikas is that he is a Kannadiga. He is a crowd-puller in his own right and he richly deserves this.