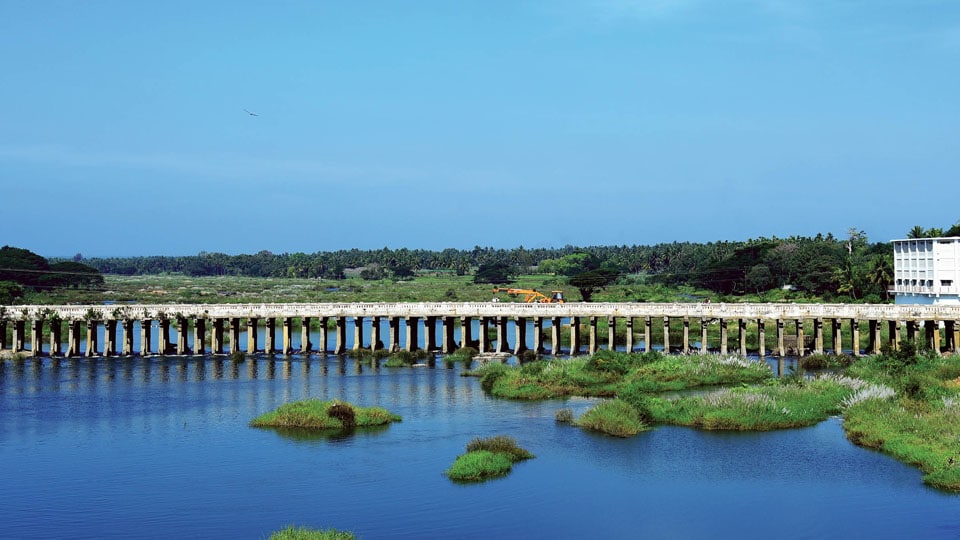 Finally, the historic Wellesley Bridge near Srirangapatna is being repaired. Works are on in full swing to seal the cracks and restore the Bridge which is in a dilapidated state. Once the repairs are over, the Bridge will be freshly painted.

The repair works are being taken up by the Department of Archaeology and Museums at an estimated cost of Rs. 28 lakh. The Wellesley Bridge near Srirangapatna was completed in 1804 during the reign of Mummadi Krishnaraja Wadiyar at a cost of Rs. 5.5 lakh. It was built after the fall of Tipu Sultan in 1799 during the Fourth Anglo-Mysore War.

Speaking to Star of Mysore this morning, Junior Engineer Kuberappa from the Department of Archaeology and Museums, who is supervising the works, said that the Bridge has been worn out due to vagaries of weather.

Every year, lakhs of cusecs of Cauvery water is released from the Krishna Raja Sagar (KRS) Dam and water flows dangerously almost covering the pillars of the Bridge. Due to water currents, the base of the Bridge has been damaged. “We are replacing the stones and are cementing worn out blocks at the base to make the Bridge stronger so that it can withstand pressure from water flow,” he explained.

The Bridge has never seen any repairs or cleaning till now. There are loads of trash under the Bridge that is stuck to the pillars. These include tree trunks, branches, discarded clothes and waste plastic. “These damage the stones and we are removing the trash in phases so that water can flow smoothly. Also plants have grown in many crevices on the Bridge and the roots of the plants burrow the stones and concrete, damaging them. We are removing the plants and sealing the crevices after spraying chemicals to prevent further growth,” Kuberappa added.

Cranes are being used for repairs and workers have been given safety equipment so that they can reach every space on the sides and bottom. Wild growth and lack of maintenance and strong water currents during monsoon and during the water release from the KRS Dam have taken a toll on the historical Bridge.

In August last year, nearly ten feet of the retaining wall of the Bridge collapsed. According to Kuberappa, for restoration the workers are using the same materials that were used during the construction of the Bridge like limestone and burnt bricks. Once the repairs are done, the Bridge will be freshly painted, he added.

Srirangapatna MLA Ravindra Srikantaiah, however, has expressed his displeasure over the functioning of the Department of Archaeology and Museums. When SOM contacted the MLA over phone for his reaction on the works that are being undertaken to restore the Wellesley Bridge, he said that the Department never updates him on any of the works in his Constituency.

“I have visited the Wellesley Bridge a couple of times since last year and have directed the authorities to take up repair works of the historical Bridge which occupies a pride of place in Srirangapatna. I have doubts if the Archaeology Department is within the control of State Government or is it outside Government purview as the MLA is kept in the dark,” he said.