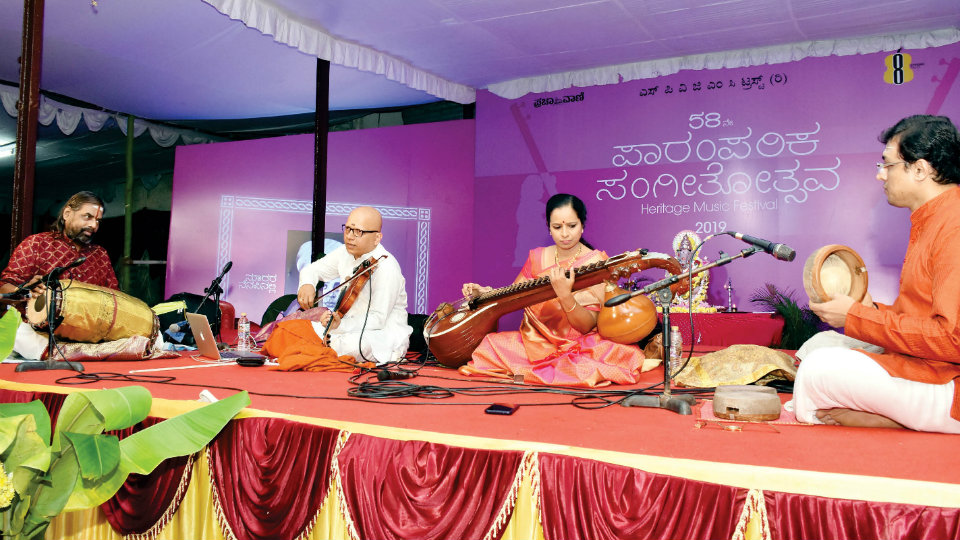 Jayanthi-Kumaresh most expressive and adept

Kumaresh is extremely talented but is more technical oriented and more interested in innovativeness whereas in Jayanthi we see the melody and the vocal style, which makes the audience move their lips along with the sahitya of the compositions she plays, as was seen in this concert.

Training under legend S. Balachander has given her playing a continuity in the notes which her Guru had achieved on the instrument. “What I needed was a more elongated note with a single stroke,” said her Guru S. Balachander and the pupil has achieved it too, which gives her music the very appealing ‘Gayaki’ style.

The duo started the concert with the Kanada varna ‘Neranammitinayya’ in Atta tala. Jayanthi’s short ragalapana in Kalyani brought many sympathetic sangatis. ‘Ganapate Mahamate’ in Kalyani was followed by variety of swaras by both the artistes.

Saveri ragalapana was taken step by step by both the artistes which led to ‘Shankari Shankuru Chandramukhi Akhilandeshwari’ sung and played by most of the artistes this season with also a detailed neraval at the usual charana part — ‘Shyama Krishna Sodari’ followed by appealing swaras.

The couple then played a song from their album ‘Raga Pravaham,’ which as Kumaresh explained is an imagination of The Devine form moving with his consort enjoying the beauty of nature and landing in Chandra Yaan.

There is no lyrics for this composition but there is only melody and tala and is therefore more suited to the instrumental rendition. The tune was set to Abheri.

The RTP for the evening was chosen in Hemavathi rarely. After an extensive ragalapana shared by the couple, the tanam was enchanting in an unbelievable speed towards the end. It was a vadya Pallavi which need not necessarily have lyrics. The pallavi was set to Adi Tala, 2 Kalai.

After elaborating and presenting the trikaalas, ragamalika swaras were played alternately in Desh, Gowla, Mohana Kalyani, Nata, Begade, Hamsadhwani, Kanada, Kalyana Vasanta, Mohana and Hindola after which a grand taniyavatanam followed by Hari Kumar on mridanga and Guruprasanna on kanjira.

‘Muralidhara Gopala’ in Tamil in rag Maand was very melodious and ‘Harivaraathmajam’ of Yesudas fame was received with great applause.