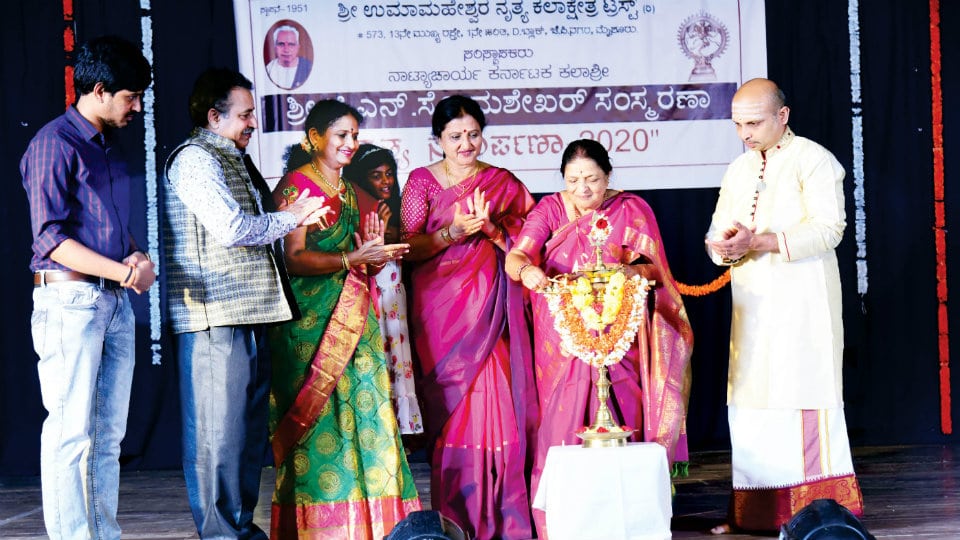 Many people have different ways of expressions and different actions while paying tributes to their departed father and Guru. Vidushi Srilakshmi Kumar has her own way to express gratitude and salute her father Kalashree late T.N. Somashekhar and Founder of Shri Umamaheshwara Nrutya Kalakshetra Trust in 1951.

Srilakshmi Kumar, an established dancer of Mysuru, is Somashekhar’s daughter, disciple as well as the present Director of the Trust which organises a function to pay tribute to its Founder every year in the month of January. For the year 2020, the event was held on 5th January at Jaganmohan Palace auditorium. The tribute was in the form of Nrutya Samarpana and Somashree award presentation to eminent artistes in and around Mysuru. The programme was inaugurated by lighting the traditional lamp by Dr. Manik A.V. Bengeri (veteran Hindustani singer, writer)  and other invitees on stage — Dr. Jamuna Rani Mirle, Ganayogi Vidwan Ambaprasad and Trust Director Vidushi Srilakshmi Kumar.

Nrutya Samarpana, a dancing tribute, started with Pushpanjali in Raag Amrutvarshini set to Aaditaal which was followed by a Hindi Bhajan composed by Saint Tulsidas in praise of Lord Rama in Raag Yaman set to Roopak Taal by junior disciples of the school. Watching tiny-tots on stage was a treat to the eyes of the viewers. The next three items were in praise of Lord Nataraja Natesh Koutukama, a traditional composition in Hansadhvani raga set to Aaditaal and Natanam Aadinnar — depicting Ananadtandava in praise of Chidambar Shiva  in Raag Vasant, which was beautifully followed by a Devarnama of Saint Purandaradasa in Raagamaalika  ‘Chandrachood Shivashankar Parvati’  in which the churning of the sea ‘Samudra-manthan’ was shown effectively. Especially Lord Shiva taking the poison ‘Kaalkoot’ for which he is named as ‘Neelakantha’ as well as Shiva’s other superpower actions like ‘Manmath-dahana’, the story of Bhakta Maarkandeya were brought out with creative choreography.

‘Maanas Mandir’ a Devi stuti in praise of Devi Shankari was a confluence of two styles of dance namely Bharatanatyam and Kathak  which was soothing.

In the interval, artistes Dr. Jamuna Rani Mirle and Gaanayogi Ambaprasad were honoured with ‘Somashree Award’ for their excellent services in their respective fields. Dr. Jamuna Rani is a multifaceted personality — a dancer, painter, astrologer, social worker and what not! She being a Bharatanatyam exponent has utilised her knowledge of dance to teach the underprivileged children from villages free of cost, most of the times spending money from her pocket to provide them the required sets of clothes as well as jewels for the dance.

The second recipient of the prestigious award was none other than violinist Mysore Ambaprasad, who is a well-known performer as well as a teacher. Vid. Ambaprasad is known for his simplicity and dedication towards music.

“Indian culture and art is very ancient and hence it is the duty of the artistes to maintain its purity and pass on the art to next generation intact,” opined Dr. Manik Bengeri in her address while appreciating the efforts of Vidushi Srilakshmi Kumar in organising the grand event.

The second part of the programme was  presentation of Srichakrarupini Navadurga Devi, two Devarnamas of Saint Purandaradasa, namely ‘Narayan Hari Govind’ and ‘Palisamma Muttu Shaarade’ in Raagmalika  was as per the usual, normal set of such programmes but the main attraction was ‘Navagraha Stuti’ in which the Planetary system consisting of  Sun, Moon, Mars, Mercury, Jupiter, Venus, Saturn and two shadow planets was brought out effectively. The dance choreography was excellent while describing the positions of the planets, their powers, their existence and their effects on human body — everything was very informative. The programme concluded with Tillanna in Raag Hindola.

The entire programme was ably compered by M.  Parvathi. The junior dancers Gyaneshwari, Diksha, Aditi made their own impact. In senior group — V. Pavanashree, Vennela, V. Maanya, Gayathri, Meghna, K. Sharanya  and Shaarika — most of them were experienced dancers and as such danced with sufficient maturity as well as perfection.