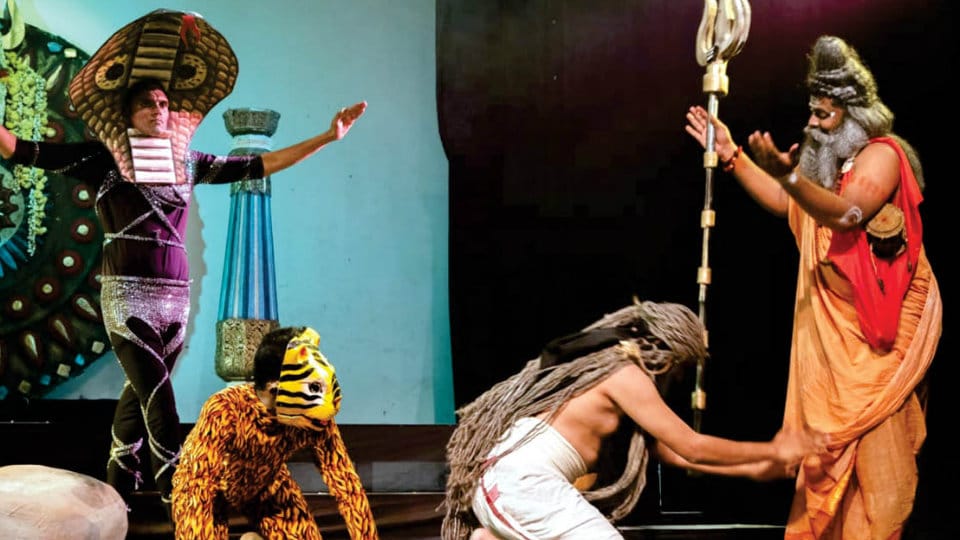 Manteswamy and ‘Male Mahadeshwara’ are the two major folk epics popular in the old Mysuru region of Karnataka. These two unique oral folk epics have been kept alive by professional singers who sing and narrate story of their deity with snake shaped tanti vadya, a string instrument, along with finger cymbals or kamsale battalu and leather drums called dammadi (small tambourine) as well as gaggara (hollow, ornamented silver ring).

Those who sing ‘Manteswamy Kavya’ or ‘Legend of Manteswamy’ are called Neelagaaras or Leelegaaras. Manteswamy is one of the most notable members of Sharana Movement started by Basavanna in mid 12th Century.

According to legend, Manteswamy came from north along with his disciples to southern part of Karnataka. The folk epic narrates the story of Manteswamy, his humanitarian works and miracles, which won the hearts of common folk irrespective of their cast or creed. The folklore enchants the listeners with its rustic flavour and austere rendering of the narrative mesmerises the listeners. This great epic was introduced to the literary word for the first time by noted folklorist Prof. Jee. Sham. Paramashivayya and many others have also published different editions of the epic.

Noted poet and playwright Prof. H.S. Shivaprakash’s Kannada play ‘Manteswamy Kathaprasanga’ is based on this narrative folk song, which has been staged to full houses on multiple occasions.

In an attempt to adapt this epic of antiquity to contemporary society, GPIER theatre troupe of Mysuru staged the play on Sept.13 to a packed  Kiru Rangamandira in Kalamandira premises. The play was directed by noted theatre person and former Rangayana artiste Mime Ramesh.

The story on the stage begins with Basavanna eagerly waiting for the prospect of arrival of a devote Sharana while Manteswamy’s journey is depicted as arrival of Paranjyothi, the Divine Light, with his demeanours. As the analogy of the droplet of water on the lotus leaf illustrates distancing attitude of non-attachment, even while he indulges himself with liquor and smoking, he is revered by Basavanna and Neelambike couple.

While Manteswamy, Rachappaji and Siddappaji are legends who are believed to be living during 16th Century, the play attempts to adapt the story of their miracles and suit it to the contemporary issues.