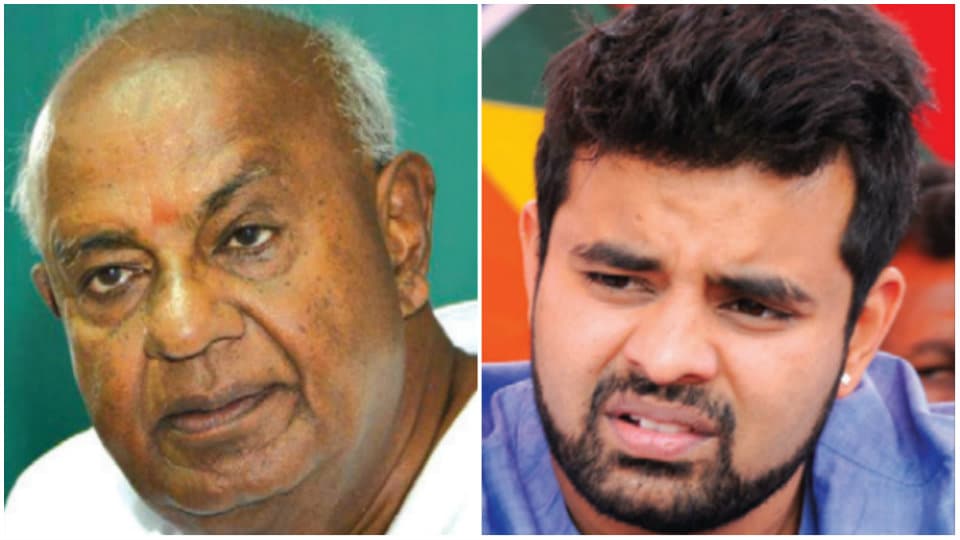 JD(S) Supremo hints at action against Prajwal for ‘suitcase’ remark

Bengaluru: A day after his grandson Prajwal Revanna said that ‘Suitcase Culture’ was prevalent in the JD(S), Party National President H.D. Deve Gowda said that he was extremely hurt by the remark and indicated that action will be taken against him for making such comments.

Speaking to  press-persons in Bengaluru yesterday, Deve Gowda said as leader of the party, he will be failing in his duty if he does not take action against Prajwal. It is important that discipline is maintained to save the party, he pointed out. Asserting that he had never indulged in ‘Suitcase Politics,’ the JD(S) Supremo said, in fact, he had borrowed loans to meet the candidates’ expenses for elections and what he (Prajwal) has said will damage his own political prospects.

Prajwal Revanna, son of former Minister and MLA H.D. Revanna, while participating in a JD(S) workers meet at Hunsur in Mysuru on Thursday, had openly criticised the party top leadership stating that people with suitcases get front row seats in the JD(S), while who are loyal to the party are assigned back seats.

Expressing disappointment over Prajwal’s remarks,Deve Gowda said such comments will take Prajwal to nowhere.  “I cannot let my family affairs drive the party to split. If there is indiscipline, I will have to take action irrespective of whether he is my son or my grandson,” Gowda said.

READ ALSO  JD(S) Supremo to campaign in city this evening

Stating that he did not have physical strength to contest the Lok Sabha Polls anymore,Gowda said Prajwal could be the Party’s choice to contest from Hassan Lok Sabha seat,which is at present represented by him.