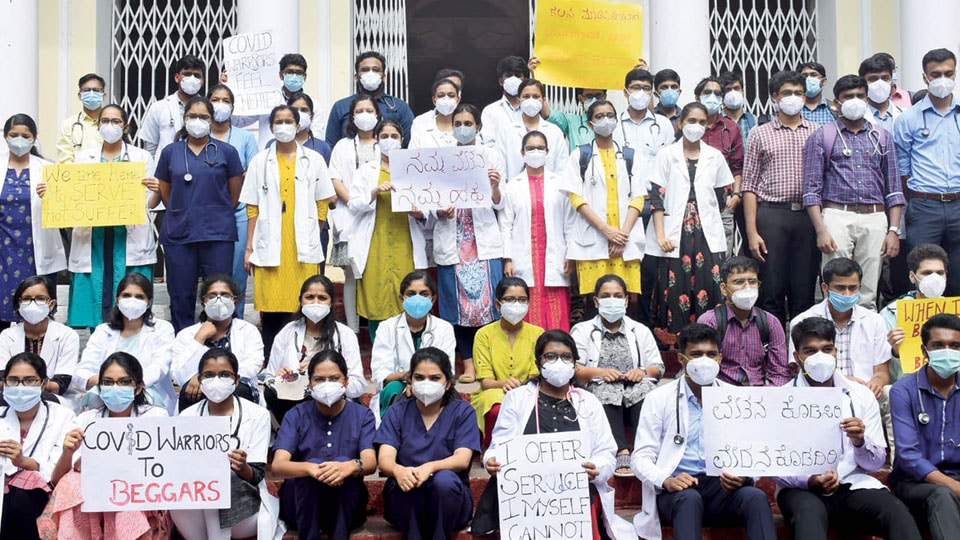 Mysore/Mysuru: Junior Residents, who are pressed into service for 24×7 COVID care in Hospitals including emergencies at the behest of the Government, are not getting their salaries and incentives despite putting in long hours of service under risky conditions.

This morning, Resident doctors attached to Mysore Medical College and Research Institute (MMC&RI) held a protest in front of the Institute to remind the Government and the authorities of what they say are shortcomings in the Medical Education Department and how they are victimised for no fault of theirs.

The doctors claimed that the Government is using their services for COVID-related work due to which there have been no proper clinical academic activities in their courses and they are still being charged fees in lakhs.

Moreover, the salaries and allowances have not been paid, they said citing step-motherly treatment.

Holding placards like ‘COVID warriors to beggars’ and ‘We are here to serve, not suffer’, they accused the MMC&RI of non-payment of salaries and COVID incentive. These Resident doctors are serving at various COVID Hospitals as part of compulsory rural service. Today’s protest was led by the Resident Doctors Association of MMC&RI. There are 126 MBBS graduates, who graduated from various Institutes across Karnataka in 2021 and were posted to MMC&RI vide a Government notification under Compulsory Rural Service Act in June this year. But they have been denied salary and COVID allowance since then.

Charging that the MMC&RI Dean and Director Dr. C.P. Nanjaraj has ignored them, the protestors said that there are no Junior Resident posts in MMC&RI. “The Dean, when approached, bluntly told us to take transfer to any other institutions. When they needed us they appointed us to serve. Now when cases are declining, we are treated badly. We feel that we are being exploited,” a protestor said.

They argued that the Government had fixed a monthly salary of Rs. 40,000 which was not enough considering the present cost of living and claimed that though they served as frontline workers during the height of COVID-19 pandemic, the MMC&RI has ignored them now.

Contending that apart from salary, which they truly deserved to be paid for their dedicated service, they said that they are also deprived of COVID incentive of Rs. 10,000 per month which was promised by the Government. “During counselling, we were offered Rs. 62,000 per month and COVID allowance of Rs. 10,000 per month. Later after appointment they reduced the salary to Rs. 40,000 and now there is neither salary nor allowance,” a doctor said.

They sought the intervention of the Health Minister, Department of Medical Education and the Department of Health and Family Welfare to render justice to them. Claiming that they are not given any accommodation during their service, they argued that the authorities had failed to pay them even the promised salary of Rs. 40,000 and this has put them in a lot of hardship.