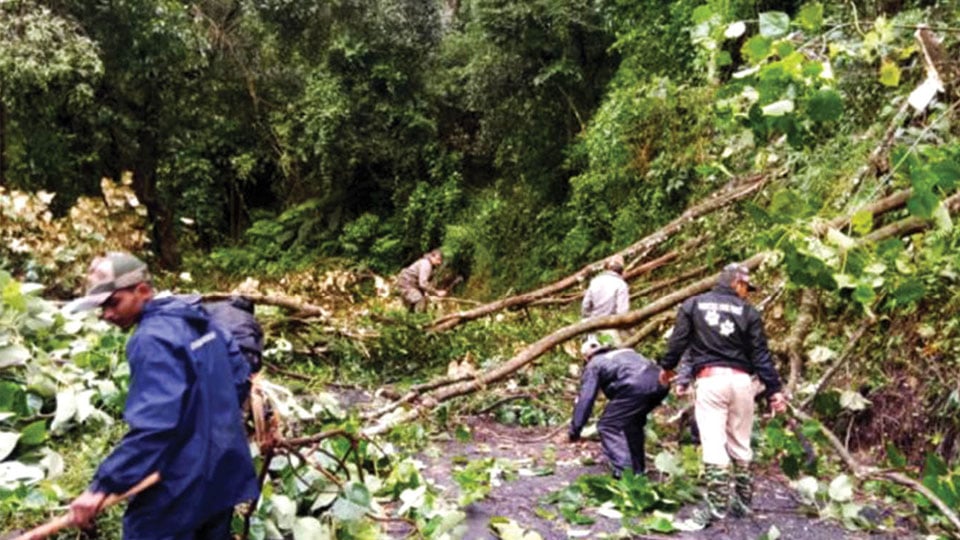 In an open letter to Karnataka Chief Minister H.D. Kumaraswamy, Justice Michael F. Saldanha (Retd.),  a dedicated environmentalist, has demanded the government to wake up before Kodagu, the catchment area of River Cauvery, is lost forever. In his letter dated Aug.7, 2018 (prior to Kodagu floods and landslides), the “Green Judge,” who is also a social activist, said he was totally horrified to see the amount of devastation in the Cauvery Basin during his recent journey to Talacauvery. With huge areas today completely denuded due to the felling of crores of trees, Justice Saldanha has put the blame on the Forest Department. He wrote that this has happened in collusion with the Forest Department and the Kerala Timber Mafia. Here are the excerpts of the letter…

I was totally horrified to see the amount of devastation in the Cauvery Basin. Huge areas have been totally denuded due to the felling of not lakhs but crores of trees in that area. My enquiries indicate that this has happened in collusion with the Forest Department and what is more disturbing is the fact that I was also told that it is the Kerala Timber Mafia and not the local people which has been systematically destroying the tree cover of Kodagu over the last few decades.

The Kerala Timber Mafia induces estate owners and government officials and indiscriminately fell trees and transport timber to Kerala. Some of the leaders in this field have become billionaires. One of the very important aspects highlighted by Coorg Wildlife Society is the fact that every tree harbours a lot of life from birds to bees and the likes and when a tree is mercilessly chopped down, all of this life is killed because this form of life is territorial and it cannot shift or migrate to another tree or another area because the life there will not tolerate it. The ecological damage is immense and the world is today fighting furiously to replace whatever has been lost.

Experts have pointed out that unless green cover is immediately replaced, it will totally destroy the Cauvery Basin. The first step that must be ordered by you as the Chief Minister is that before the rains conclude, the Forest Department must plant saplings in all the areas that have been deforested and maintain them so that the damage can be undone to some extent. It is very fundamental that you order this step immediately.

Thousands of ordinary human beings like me lost more than one full day because you were holding some thanksgiving function in Mandya last month because of which the National Highway (NH) was closed for seven hours. When I was the Judge of the Karnataka High Court, on three occasions I had ordered the State Government that if VIP movements are there and if the reasons are genuine the traffic can be temporarily stopped — for not more than 15 minutes — to allow the VIPs to pass through.

The shutting of a part or the whole city on a NH is a crime against humanity. This had been stopped by me even when your Honourable Father who was the PM and I do hope that you will respect the citizens of Karnataka and see that incidents like this do not happen ever again because it is not only the Chief Minister but every so-called VIP who keeps doing this. It would be more considerate to the citizens of Karnataka if all these big people travel only by air and do not disrupt public life.

What pained me most was the fact that you as the Chief Minister had visited Kodagu very briefly. On the ground that the Chief Minister was visiting the area, the media pointed out that hundreds of trees were either cut or branches were pruned because they were supposed to be leaning on the roads and could cause danger to the CM’s convoy. None of these trees were causing any danger or obstruction to ordinary citizens like me but this was made the ground for cutting trees.

I very humbly and respectfully point out that we cannot afford to lose our trees in Kodagu or for that matter in the whole of Karnataka, if this is going to happen every time a Minister or a VVIP visits an area. The citizens are entitled to demand that your Government passes an order which must be publicly promulgated that no trees will be cut anywhere in the State to facilitate VIP movements.

It is also imperative that since what has happened is absolutely unpardonable and illegal that an immediate order be passed that all the green cover that has been damaged is restored. The Kodavas are furious that this has happened and I join them in this demand that the damage be undone through time-bound action. Nobody in this State is fooled by operations of this type which are undertaken by public authorities in order to provide crores of rupees to the illegal timber mafia.

You have told us that you are serious about the welfare of the State and its citizens and if that is so, you ensure that the action asked for is taken because time is of the essence.