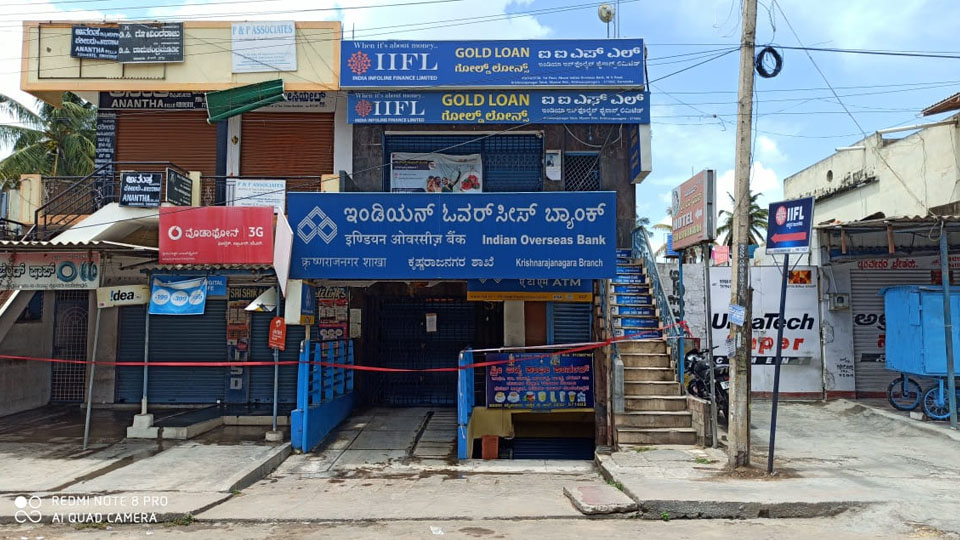 Mysore/Mysuru: A Bank Manager in K.R. Nagar,  Mysuru, has tested positive for COVID-19 late yesterday. He has been shifted to COVID Hospital in Madurai as he had been there on a visit. The Bank in K.R. Nagar has been sealed down and all the other six employees have been asked to remain in home quarantine.

The person works as a Manager in the Indian Overseas Bank located on the Mysuru-K.R. Nagar Main Road. After finishing work on June 2 along with other six bank employees, the Manager boarded a bus to Bengaluru and from there he went to the Kempegowda International Airport along with a group of friends in a car.

From the Bengaluru Airport, he took a plane to Chennai on June 4 where his throat swabs were collected at Chennai International Airport as per protocol followed to all inter-State fliers. The Manager then left to Madurai where he had some work. His samples tested positive and the Bank Manager was informed about the same and immediately shifted to Madurai COVID Hospital.

Madurai health authorities passed on the information to Mysuru District Administration and as such, the Bank has been sealed this morning. Throat swabs of all the six employees have been collected and they have been asked to stay in home quarantine while the samples have been sent for tests.

It is, however, suspected that the Bank Manager could have contracted the disease in the plane that he flew from Bengaluru to Chennai, a COVID hotspot. The authorities are not taking any chances. The Bank Manager has a house in Kanakanagar in Ward 17 of K.R. Nagar.