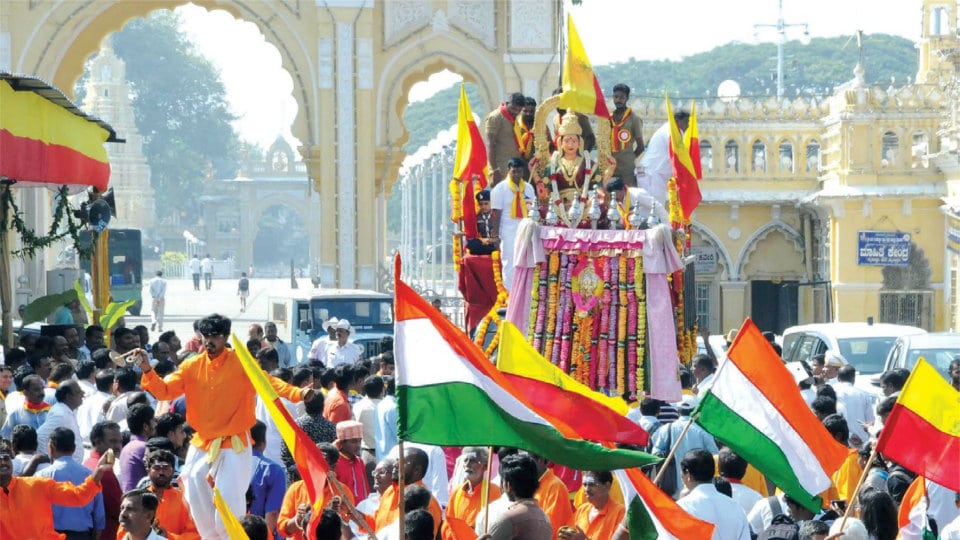 Mysuru: Kannada Rajyotsava was celebrated in a grand manner in city on Wednesday.

People from different age groups took part in the event organised by the District Administration in front of Kote Anjaneya swamy Temple at the North Gate of the Palace.

Addressing the gathering on the occasion, District in-charge Minister Dr.H.C. Mahadevappa said that the State is known for equality and harmony and it is every individual’s responsibility to uphold the values of the constitution.

Observing that administration and Court matters should be in Kannada language, he said that it is high time we promote the language in social media too.

Appealing all the parties involved to make the 83rd Akhila Bharatha Kannada Sahitya Sammelana to take place at Mysuru this month end, a grand success, Dr. Mahadevappa said it is a matter of pride to host the biggest Kannada event in Mysuru.

Stating that the State has a history of 2,000 years, he recalled the contributions of many stalwarts who started the movement for unification of the land, with Aloor Venkatarayam giving a much needed boost to the movement, travelling across the land and holding meeting to writer people. Recalling the rich grandeur and culture of Karnataka, he said it is high time that available resources of the State is scientifically used for development works. “We should make everyone to honour Kannadambe (mother Karnataka),” he added.

Tributes were paid to H.D. Kote MLA S. Chikkamadu who died of ill health on Wednesday by observing a two-minute silence. Personalities from various fields were conferred the district Rajyotsava award on the occasion.

Mayor M.J. Ravikumar, Deputy Mayor Rathna Lakshman, MLA M.K. Somashekar, DC D. Randeep and other officials were present. Earlier, the Minister and other dignitaries offered floral tributes to the idol of Bhuvaneshwari Devi, following which the National flag and Kannada flag were unfurled.

Later, a procession was taken out from the venue carrying a portrait of Goddess Bhuvaneshwari.

Artistes performed folk arts such as puja kunitha, dollu kunitha and kamsale. The procession also featured carrying of portraits of personalities who have contributed for the development of Kannada language. The day also saw several buses specially decorated with pictures of prominent personalities of the State.