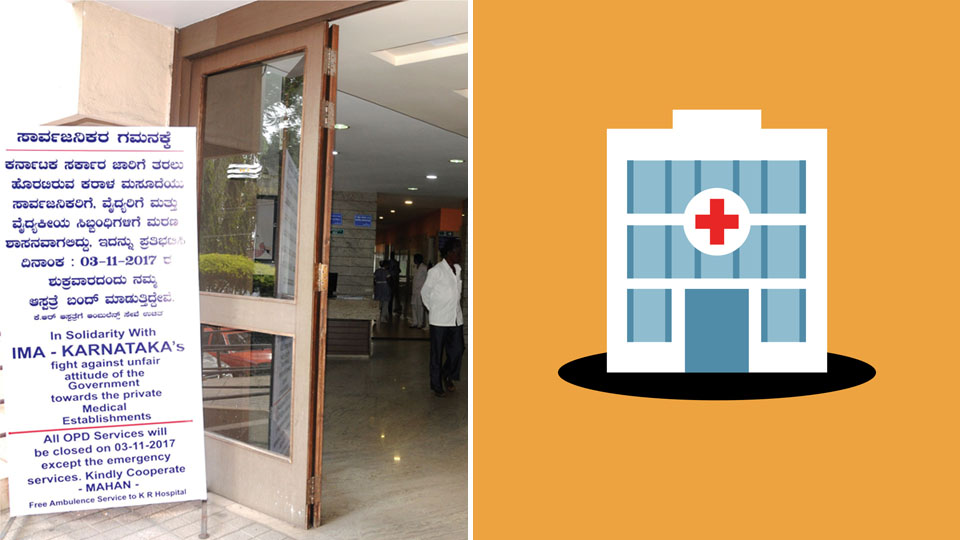 Mysuru: In a show of vehement protest against a draconian law to be introduced by the Government, intended to regulate private hospitals in the State in the matter of treatment and hospital charges etc., all the private hospitals in city will be closed tomorrow from 8 am to 8 am the following day.

The doctors are up in arms against the State Government’s decision to implement the Karnataka Private Medical Establishments (Amendment) Bill 2017. The strike has been called by the Karnataka Chapter of the Indian Medical Association (IMA) and will affect all private outpatient medical facilities in the State for 24 hours and only emergency and trauma cases will be attended.

Speaking to SOM, MAHAN Media Convener Dr. Javed Nayeem said that a massive rally will be held tomorrow at J.K. Grounds to protest against the State Government’s move.

In their communication to the Chief Minister and Health Minister, the IMA communicated specific objections to the law, especially about the provision of imprisoning doctors for alleged mistreatment.

In a press statement, IMA demanded to drop amendments made in respect of constituting district grievance redressal committee, punishment for doctors in case of failure of treatment and charging fees. It said that they are ready to display the cost of each treatment but questioned how it would be appropriate for the Government to decide the revision of treatment cost. “If the proposed amendments are brought in, it will be a death trap to small and medium-sized hospitals,” the statement said.

Doctors say that by bringing in amendments, in one or the other way, the Government is ‘trying to kill the confidence of the doctors.’ The Bill also has provisions to imprison or fine doctors and also cap the prices of medical services. Arguing that criminalisation will only prove to be counterproductive, the IMA said that it will make doctors hesitant to treat risky cases. The IMA has also claimed that the capping of prices of medical services as proposed in the Bill by an expert committee is “unconstitutional” and asked the Government to invest in better healthcare.

8 COMMENTS ON THIS POST To “Govt’s Draconian Law: Private Hospitals in city to close tomorrow”