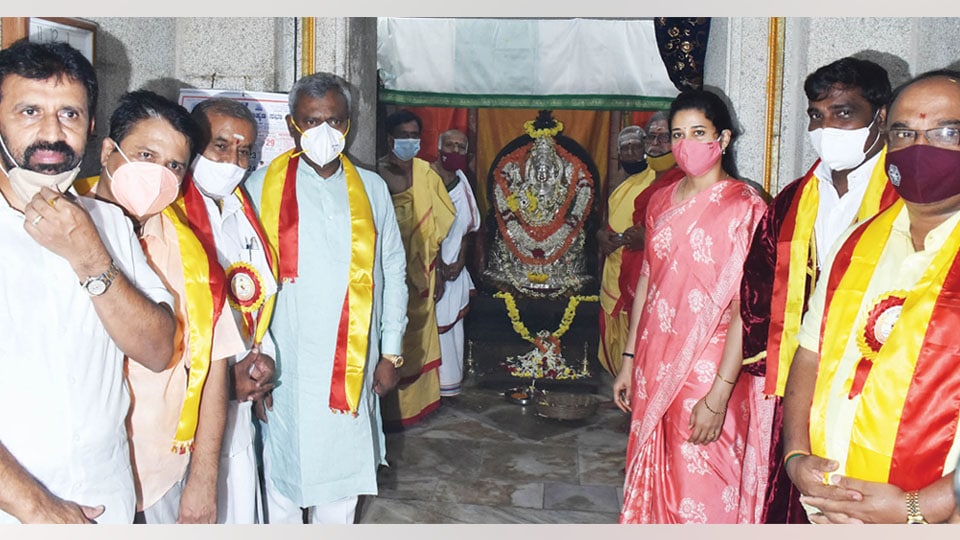 Mysore/Mysuru: Asking the younger generation of Karnataka to become partners in all initiatives for the overall growth of the State, District Minister S.T. Somashekar said that youths, apart from focusing on their academics, should also develop a liking for Kannada literature and culture.

He was speaking at the Kannada Rajyotsava celebration, organised by the district administration in front of Kote Anjaneyaswamy Temple at the Palace North Gate here on Sunday.

Emphasizing on the need for the younger generation to carry forward the legacy of our rich traditions and culture, he said that everyone should adopt Kannadaism in life and it is only then that Kannada would survive and grow.

“Making Mysuru an entirely COVID-free district is our immediate task. We have  successfully celebrated Dasara by following all COVID-19 protocols and also at the same time ensuring that we do not break the norms. Such co-operation of the people will go a long way in making the district free of the deadly virus soon,” he said.

Maintaining that the people of the State have extended their co-operation to the Government, Somashekar said that the help and co-operation extended by Kannadigas, who are known for their large-heartedness is invaluable. As a District Minister, he will seek such an expanse of co-operation in the future too, he added.

Two persons, who are avid Kannada fans, were the star attraction at the programme. Ramesh Shetty, a disabled person and an employee of city’s BEML, came to the venue in his magnificently decorated mobility scooter, symbolic of Kannada Ratha, carrying the Kannada flag, while Puttaswamy, a resident of Soppinakeri in Mandi Mohalla, came in his decorated bicycle, carrying a large sized Kannada flag. Puttaswamy said that he has been taking part in the Kannada Rajyotsava programme in city for the past 35 years, adding that he is an ardent devotee of Goddess Bhuvaneshwari.

Apart from these two, a seventh standard student also caught the attention of the gathering. V. Bhuvanth, a student of St. Mary’s School in Chamundipuram arrived at the venue carrying a Kannada flag and creating awareness against the use of plastics and on maintaining COVID-19 norms. He said that he has been taking part in the Rajyotsava celebrations for the past three years and his main objective is to create awareness about protecting our ecology and environment.

A city bus (Route No.116) which was splendidly decorated for Rajyotsava, was also brought to the venue.

Earlier, Minister Somashekar and other dignitaries offered prayers at Sri Bhuvaneshwari Temple inside the Palace premises.

A total of twelve personalities from different fields were felicitated for their achievement on the occasion.

The Vedike members appealed the public to develop an interest for reading Kannada newspapers and buy them.