Home » News » ‘Kannada has survived only because of rural people’ 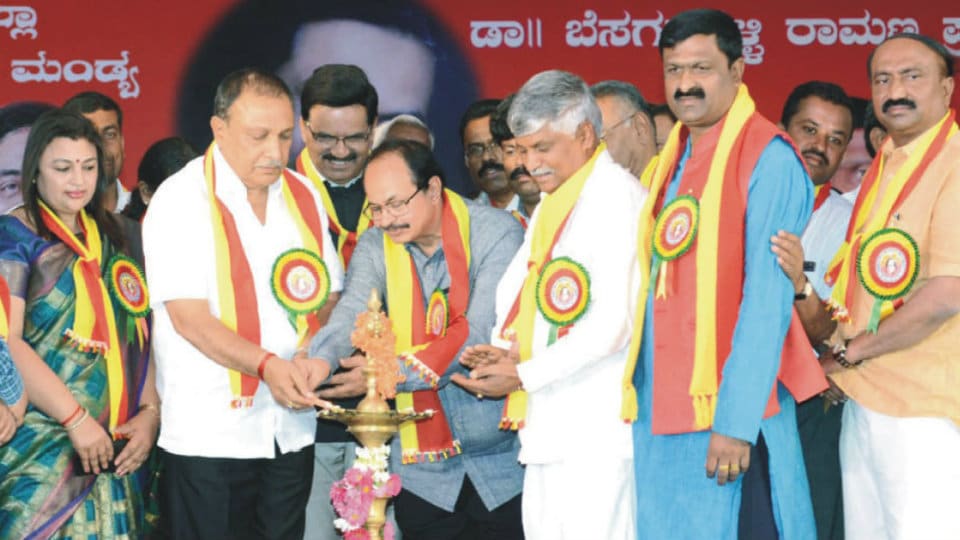 ‘Kannada has survived only because of rural people’

“Kannada has survived only because of rural people,” opined Littérateur M. Krishnegowda, President of 14th District Kannada Sahitya Sammelana which was held at Sir M.V. Stadium here on Friday. In his presidential address, Krishnegowda said that Kannada was an integral part of folklore which has strong roots in rural areas. He hailed the contributions of B. Rangaswamy, K.R. Krishnaswamy and H.L. Nagegowda of the district for folk and literature sectors, who have carried on the legacy of poets of yesteryears. He advised every Kannadiga to strive for the language and sought equal support by the Government.

Continuing, Krishnegowda lamented that the water scarcity in the district had resulted in black-mailing politics between Karnataka and Tamil Nadu.

Speaking on the occasion, District in-Charge Minister M. Krishnappa hailed the district for contributing a good lot of political leaders and littérateurs.

Addressing the gathering, MP C.S. Puttaraju regretted that people today were strongly drawn towards English and Kannadigas have gradually become a minority in Bengaluru and added that Kannada was gaining importance abroad and not in the State capital.

Books of various writers were released on the occasion.

Sammelana President Krishnegowda and his wife were brought to the venue from Raitha Sabhagana in a colourful procession accompanied by several folk troupes exhibiting their talents.

Progressive farmers Narasaraju, Basavaraju, Krishnegowda and Yogananda were felicitated on the occasion. A cultural programme was also held later.