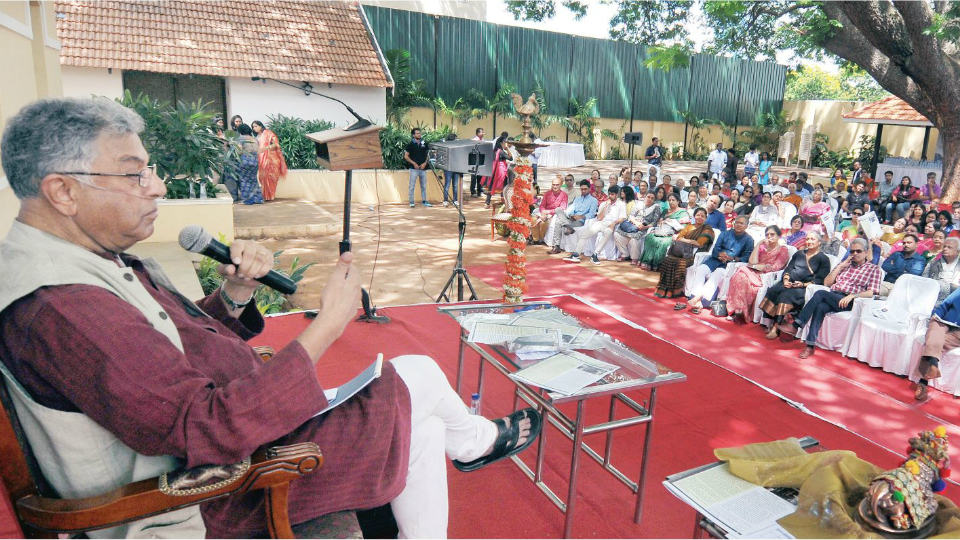 Mysuru: The fragrance of the Mysuru Literature Festival, organised by the Mysuru Literary Forum Charitable Trust and Book Clubs 2015, wafted across the old neighbourhood heritage structure, Wind Chimes, in Nazarbad, as Jnanpith Awardee Girish Karnad delivered the keynote address, setting the tone for the day-long festival. Rightly choosing A.K. Ramanujan, the poet and scholar of Indian literature who hailed from Mysuru as the topic for the inauguration of the literature festival, Karnad wove tales of how the litterateur gathered old tales “Ajji Kathegalu,” also called Kitchen Tales.

“The ladies would sit in the kitchen during evenings and first serve food to the children, then to men and finally they ate. But while serving the food to the boys who were all aged between 6 and 10, they would tell them tales probably to make them eat well,” said Karnad and added, “but by the time they reached the age of ten the boys would be expelled from the kitchen.”

Referring to  Indologist Robert Redford who had said that only 10 percent had real culture and the remaining 90 percent were ignorant, Karnad called it the area of darkness and said Ramanujan was livid with this explanation and talked about the oral tradition that India has which the Indologist was ignorant of.

Taking a dig at the men whom, he termed ‘wimps,’  Karnad said, “But the distinguishing feature of all these oral tales is that in them it is the women who have the energy, wisdom, foresight and cunning to save their men. The men are ‘wimps’, only too susceptible to control by other women, usually mothers, courtesans or in-laws. Ultimately, it is the woman’s enterprise that saves the marriage. It is a world where women are firmly in charge.”

“In the classical tale, Sita, Savitri and Draupadi are chaste, devoted to their husbands. In oral tales, women cheat, take on lovers. Adultresses triumph,” he said.

Reciting an excerpted version of the poem of Ramanujan titled, ‘Still Another View of Grace’ he said,  “I think it is about what happened to him when he left the claustrophobic, segregated and puritanical society in which he was brought up in India, to be launched on a life of sexual freedom, devoid of social constraints but fraught with indefinable anxieties and fears, in the West.”

“Today there is more entertainment on television which is trash but it was the tales told earlier which kept your mind alive. The three things that were talked about at home were —food, daughter and tale and stories worked as a social function,” he said. 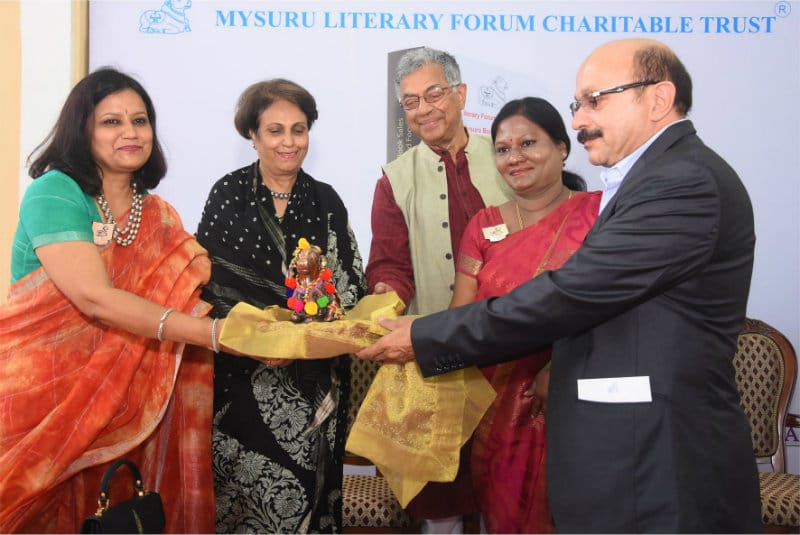 Chairman of the Charitable Trust Shuba Sanjay Urs welcomed and Secretary of the Trust Vinaya Prabhavathy proposed a vote of thanks. Nearly 500 people are participating in the day-long Festival.

Asked about how he felt when he hit a batsman while bowling which drew blood, Srinath said, “Because I am Mysurean, I felt really bad at that moment. You need to have that compassion.”

And to a question as to why he did not concentrate on batting, his repartee was, “I had fractured my fingers seven times and all the times while batting!”