Mysuru: Finally, after several months of dilly-dallying and procrastination on launch date, the city of Mysuru got to hear the soothing “Trin Trin” sound reverberating across its streets this morning. India’s first Public Bicycle Sharing initiative was launched by Chief Minister Siddharamaiah at Jayachamarajendra Wadiyar Circle (old Hardinge Circle).

A visibly elated Siddharamaiah rode a cycle along with Urban Development Minister R. Roshan Baig, PWD and Mysuru District in-Charge Minister Dr. H.C. Mahadevappa, MP R. Dhruvanarayan, Mayor M.J. Ravikumar, MLA M.K. Somashekar and others. As the CM was in action, video and photo journalists ran behind him to capture the best moment.

Due to the inauguration and VIP movement at the busy Jayachamarajendra Wadiyar Circle, the entire area was cordoned off leading to huge traffic jams around the area and on the roads that linked other localities. The Police had blocked entrances via Jayachamarajendra Wadiyar Circle to City Bus Stand, Sub-urban Bus Stand, Chamundi Hill Road and Exhibition Grounds Road, leading to bumper-to-bumper traffic. 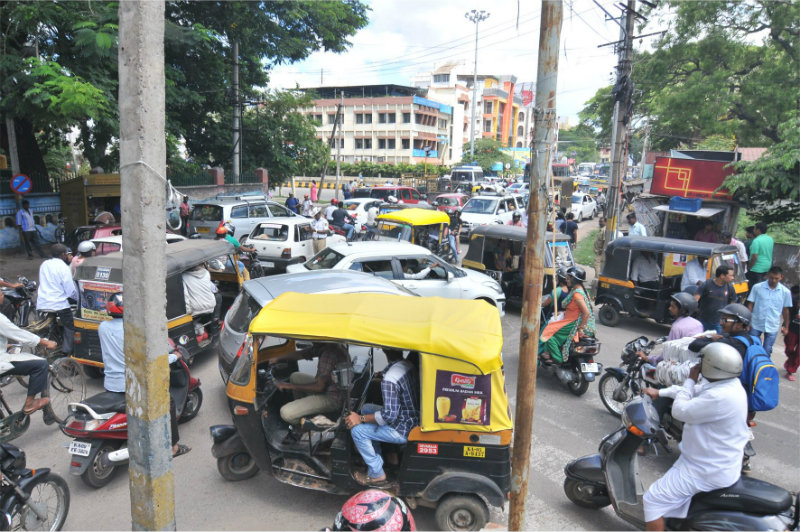 To mark the day of Trin Trin launch, a “Cycle Day” was also flagged off near Hardinge Circle. The aim of “Cycle Day” was to encourage and give citizens the confidence to use a fuel-free means of transportation like cycling for short distance commutes.

Speaking after inaugurating the initiative, CM Siddharamaiah said that Mysuru has got a new sobriquet as “India’s First Cycle City”. “It is a proud moment for us and Mysuru is one among the 600 cities in the world that have the bicycle sharing system,” he said. 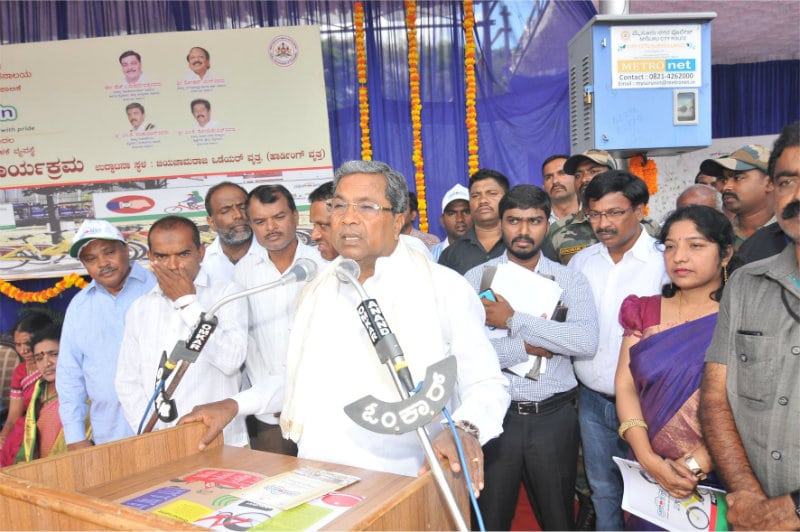 Directing the authorities to introduce more senior citizen-friendly cycles, the CM said that the present cycles were not fit for the elderly but only suited people below 30 years of age.

He recalled his younger days where he had to cycle from Mysuru to his native Siddaramanahundi. “Even I had seen the cycle system in Belgium where my son Rakesh was admitted to a hospital,” Siddharamaiah said.

Public Bicycle Sharing (PBS) is a system where bicycles are owned and operated by a civic administration and its associates, for shared, short-term use by local residents as well as visitors, on an easy rental basis. The system involves borrowing a bicycle from any docking station across the city and returning the borrowed bicycle after a ride to any docking station.

Christened ‘Trin Trin’, the project is run by the State government and was funded by the World Bank under its Global Environment Facility grant. The Mysuru City Corporation is implementing the project, in collaboration with the Directorate of Urban Land Transport (DULT). The total project cost is Rs. 20 crore.

The PBS system will have 450 bicycles (430 normal and 20 geared cycles) and 48 docking stations at major tourist destinations, universities and offices. The docking stations are automated and users can use a smart card to take cycles from one docking station and return the cycle at any other docking station. On return of the cycle, a nominal user fee would be deducted from the smart card. ‘Trin Trin’ in Mysuru is being implemented and operated by Green Wheel Ride.

The docking stations, which are equipped with CCTV cameras, will be monitored from the control centre in Jayanagar.

Users can have information on availability of bicycles at each docking station by logging on to www.mytrintrin.com

HOW DOES IT WORK

Those who want to rent a bicycle need to register themselves either online or by visiting one of the six registration centres.

Users will have to obtain a smart card after paying Rs. 350, including a refundable deposit of Rs. 250.

Renting is free for the first one hour.