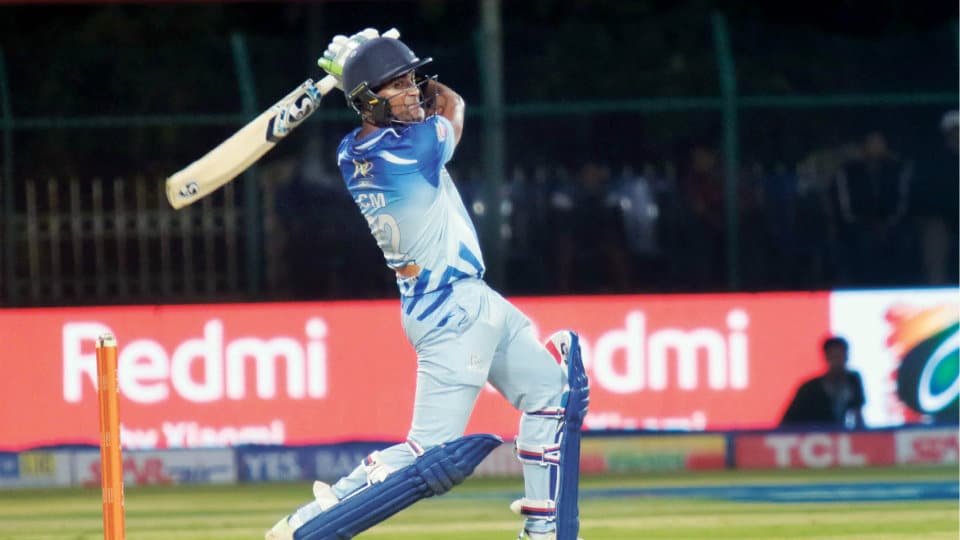 Ballari Tuskers made short work of a lacklustre Belagavi Panthers, defeating them by 37 runs at the SDNR Stadium yesterday to make it to the final of the Karnataka Premier League (KPL).

After putting up a mammoth 201 for 7 in 20 overs, all thanks to a magical 96 from C.M. Gautam, Tuskers’ bowlers brushed off memories of their harrowing loss against the Mysuru Warriors to restrict the Panthers to 164 for 7 in 20 overs.

Abhinav Manohar was the only batsman who looked in the nick, scoring an aesthetic 62 not out in 39 balls. Panthers will now face the winner of the Eliminator between Shivamogga Lions and Hubli Tigers in Qualifier 2 on Aug.30. The Lions-Tigers face-off later today.

This will be Tuskers’ second final since their triumphant run during the 2016-17 season. While the batsmen, Gautam in particular, were the cornerstone of this handsome victory, if it wasn’t for their bowlers coming good on the night, the Tuskers may have had to suffer yet again.

Residual memories of that three-wicket loss against the Warriors after putting up 240 would have stirred on, but with Prasiddh Krishna back in the side after taking a break for that game, they would have felt far more confident.

Apart from Krishna, Abrar Kazi (1-15) and K.P. Appanna (2-26) were in fine fettle. K. Gowtham was expensive but he did pick up a wicket to take his season tally to 20 wickets from seven matches. He is also well ahead on the all-time list with 72 from 47 games. Vyshak Vijay Kumar is second with 62 from 41 matches.

READ ALSO  Every player wants to be a Warrior: Amit Verma

Gautam was in top form as a strategist from behind the stumps, but it was his work from the front of it that truly swung the game Tuskers’ way.

Gautam dedicated a good part of his innings to rotating strike but when the balls were there to be hit he didn’t hold back. That experience, combined with clever footwork and a penchant for innovative paddle scoops, took him to 96 from 63 balls with nine fours and five sixes.

While he did contribute hugely to the score in an individual capacity, it was his ability to string partnerships that put Tuskers in this position of strength. He added 35 runs with Abhishek Reddy (16), 49 runs with Devdutt Padikkal (19), a quickfire 67 with C.A. Karthik (25) and a blitzy 49 with Zeeshan Ali Sayeed (32). Law of averages caught up with Gowtham (0), the batsman, but luckily for the Tuskers they didn’t need him to come good again.