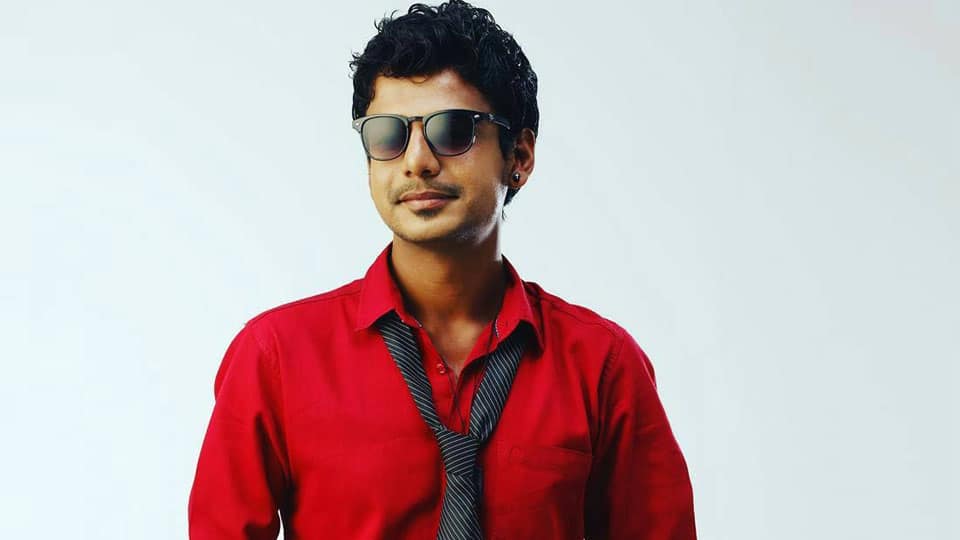 After ‘Kirik’, Chandan aims for a bigger ‘Party’

Actor-Director Rakshit Shetty’s debut production ‘Kirik Party’ has grabbed headlines for being an out-and-out entertainer made out of a shoe-string budget. The film, directed by Rishab Shetty, has a host of supporting cast entirely made up of new faces. And these fresh faces have become a household name, thanks to the film that has entered the ‘hit’ league with its originality, innovativeness and full-of-youth plot and story-line. One of the fresh faces in the movie is Mysurean Chandan Achar, who plays the role of ‘Alexander Gabriel’.

A graduate from Maharaja’s College, Chandan learnt theatre basics at Natana and later joined renowned Ninasam in Heggodu, Shivamogga district. As an amateur artiste, he made his debut on stage through the play ‘Sankranti’, directed by actor Mandya Ramesh a few years back.

Star of Mysore caught up with Chandan Achar, one of the ‘Kirik’ boys, during his recent visit to Mysuru where he spoke about the success of the movie and future projects. Excerpts…

Star of Mysore (SOM): How did ‘Kirik Party’ happen?

Chandan:  I wanted to act in movies even at the time when I was in Ninasam. After graduation from the theatre repertory, I came to Bengaluru and started working with theatre director Sethuram, later with B. Jayashree and Hulugappa Kattimani and other amateur theatre groups. I was looking for a break and one fine day, I received a message from my friend regarding ‘Kirik Party’ auditions. On his advice, with no hopes I attended the audition. I remember I had received ‘759’ card number out of 3,000. Luckily I got selected. Today, the movie has been received well by the audience and people have also appreciated my work along with others. It’s like a dream come true.

SOM:  Share with us your experience of working with Rakshit Shetty?

READ ALSO  When the ‘Kirik Party’ beauty was in town…

Chandan:  Rakshit Shetty is basically a brilliant director and actor. We all have seen the way Rakshit grew in film industry as an actor, director, producer, lyricist, choreographer, singer in a very short span, definitely because of his talent. After being selected for the movie, the first thing Rakshit told us was to gel with each other and become friends which actually worked for the movie. He is a kind of a person who always wants 100 percent from his actors and gives emphasis on realistic acting. He has created a different genre for himself through his movies such as ‘Ulidavaru Kandanthe’, ‘Ricky’, ‘Godhi Banna Sadharana Mykattu’ and others. I think Rakshit’s mastery over script and technical skills contributed majorly for the success of ‘Kirik Party.’ As a producer, he has done his work neatly in all aspects. The best part of him is supporting young talents.

SOM: Tell us about your future projects?

Chandan: I wanted to work with Yograj Bhat from many years. Finally I got an opportunity to work in ‘Mugulunage’ which also stars ‘Golden Star’ Ganesh. I have also been approached for other movies which are still under discussion.

SOM: Do you wish to act in other languages as well?

Chandan: As an actor, I want to learn a lot of languages and act in as many movies as I can in various languages. I don’t want to restrict myself to Kannada as I believe that as an actor one should be able to adapt to various formats and languages. Currently, I am focusing on my future projects. If opportunity to act in other language movies comes my way I would definitely think about taking them up.

SOM: According to you how important is theatre experience for an actor before entering the film world?

Chandan: For an actor, it is important to feel the character he plays be it in movies, television soaps or theatre. A person, who does not have such capabilities, cannot be an actor. According to me, imitation is basic of acting and unfortunately many wouldn’t have crossed the level of imitation. For a person to be able to cross the level of imitation and create a space, theatre experience is most important as it will help one groom his/ her acting skills more than it helps one to get into movies.

A file photo of Chandan Achar in a play.

SOM: In recent years many youngsters from Mysuru have got into movies. Your views.

Chandan: I feel really proud that a lot of youngsters have entered big and small screen from Mysuru. There were people who were working in the industry since yesteryears but were not recognised much except for a few. Now the scenario has changed as talented people are sure to get instant recognition and fame. There are youngsters from Mysuru working both on and off the sets. Ours being a cultural city, it is sure to give more talented people to the industry.

SOM: How has life changed since ‘Kirik Party’?

Chandan: Life has definitely changed since the release of the movie. People recognise me wherever I go. It also motivates me to get better as an actor and deliver to the best of my ability.