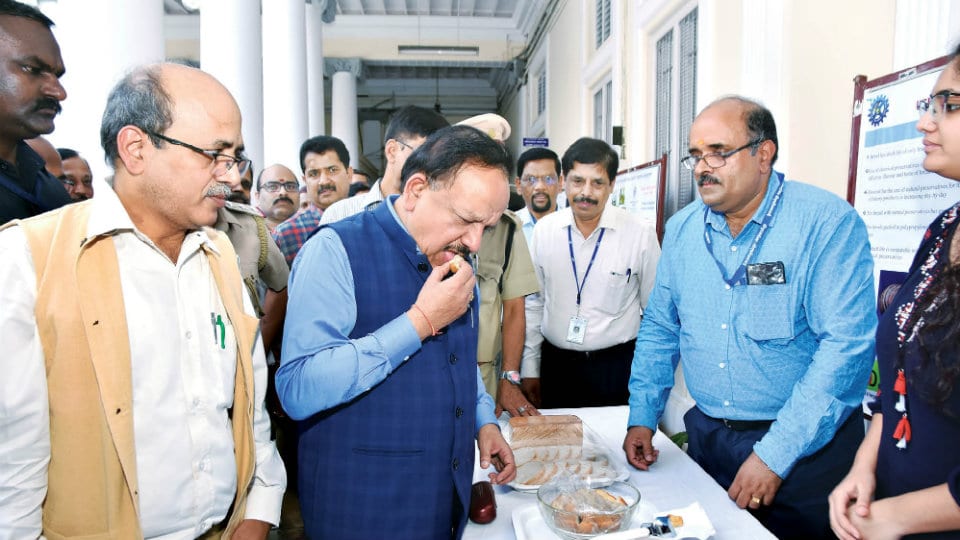 Mysuru: “The India International Science Festival (IISF-2019) will be held from Nov.5 to 8 this year at Kolkata,” informed Union Minister for Science and Technology, Earth Science, Health and Family Welfare Dr. Harsh Vardhan.

Addressing a press conference at CFTRI auditorium here yesterday, Dr. Harsh Vardhan informed that the fifth edition of IISF is going to be one of the biggest platforms in the country for bringing together students, researchers, innovators, artists and the general public for celebrating India’s achievements in science and technology.

“While Biswa Bangla Convention Centre and Science City will be major venues hosting the Kolkata Science Festival, Satyajit Ray Film and Television Institute, Bose Institute and Indian Institute of Chemical Biology are also the other venues that will host the mega science show,” said the Union Minister.

“More than 2,500 school students from across the country have been invited and Students’ Science Village will set up. Under the Pradhan Mantri Sansad Adarsh Gram Yojana, every Member of Parliament has been asked to nominate five students each along with their teacher from their constituency for the village and these students would be engaged in several science-fun activities and interact with scientists and technocrats. Young Scientists’ Conference and several expos including Science Expo at Science City along with Vigyanika – Science Literature Festival and book fair have also been organised,” he added.

“Central Government has reserved eight percent of Union Budget for healthcare and has been benevolent in terms of providing Grants to institutions engaged in scientific research and development including CSIR and CFTRI,” added Dr. Harsh Vardhan.

Also, the brochures of the Science Fest were released during the press meet. CFTRI Director Dr. K.S.M.S. Raghava Rao, Vijnana Bharati Secretary Praveen and others were present.

Primary Health Centres to be modernised

Earlier in the day, speaking during the inauguration of All India Health Professionals Conference at Senate Bhavan in Manasagangothri yesterday, Union Minister Dr. Harsh Vardhan informed that the country’s one-and-a-half lakh Primary Health Centres (PHC)  and Wellness Centres will be modernised.

In an effort to provide better healthcare and services to common man, Central Government is planning to upgrade the Health Centres across the country with modern sophisticated medical equipments along with proficient medical staff, he said and added: “Initially, we are planning to upgrade about 40,000 PHCs. We need to create awareness about health and well-being. Arogya Bharti is doing commendable job in this regard with its unique programmes organised all across the country.”