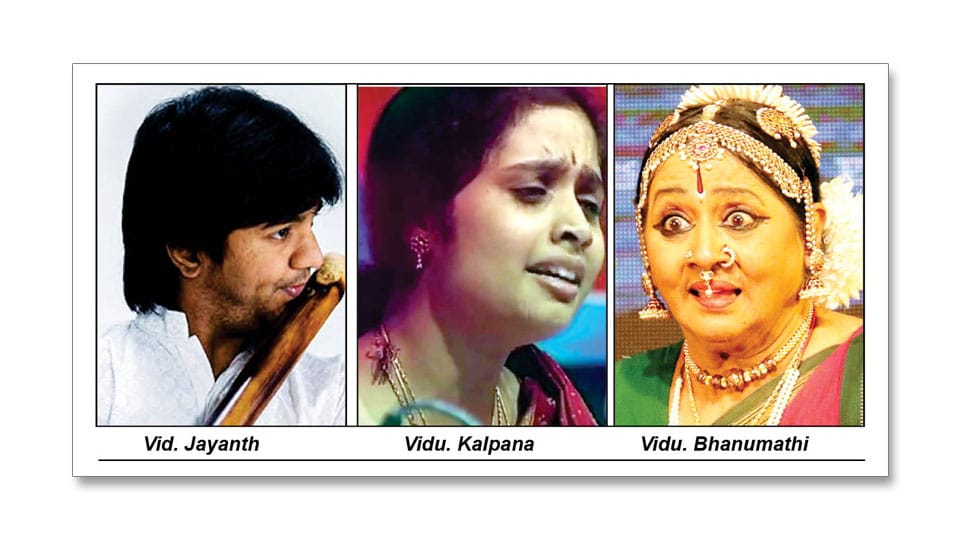 Ganabharathi is celebrating Krishna Jayanti Music and Dance Festival from Sept.7 to 9 at Veene Seshanna Bhavan in Kuvempunagar. Popular young artistes and senior artistes will perform on this occasion. Details of the festival are as follows:

Sept.7: At 6 pm there will be a flute recital by Vid. J. A. Jayanth,  accompanied by Vid. Vittal Rangan on violin, Vid. K. U. Jayachandra Rao on mridanga and Vid. S. Manjunath on ghata.

Prizes will be distributed to winners of various competitions held as part of Krishna Jayanti on Sept.9 at 5 pm. President of Ganabharathi  Dr. C.G. Narasimhan will preside. This would be followed by a dance feature “Krishnadarshana” by Vidu. Bhanumathi and troupe.

A  special review competition of the above dance and music programmes of Krishna Jayanti festival is also being organised this year. Interested participants below 25 years can take part.

Vid. J. Jayanth: A prodigy, driven by divine in-born talent and bubbling enthusiasm in bamboo flute, he was naturally drawn into the tutelage of his grandfather, noted flautist late T. S. Sankaran (prime disciple of Flute Mali) in a traditional Guru-Sishya parampara since the age of five. Much before at the age of four, he was grounded well in vocal music by his grand mother late V.S. Sundari.

Vidu. Bhanumathi: Born in a musically inclined family, her mother was Isamani L. R. Lakshmi, a noted composer and father Dr. C. S. Balakrishnan, a zealous promoter of Indian Classical Music. She has had the privilege of the tutelage of legends like Padma Shri K. N. Dandayuthapani Pillai at Chennai, Padma Bhushan Dr. K. Venkatalakshamma, the doyenne of Mysore Palace tradition and Padma Bhushan Kalanidhi Narayanan.