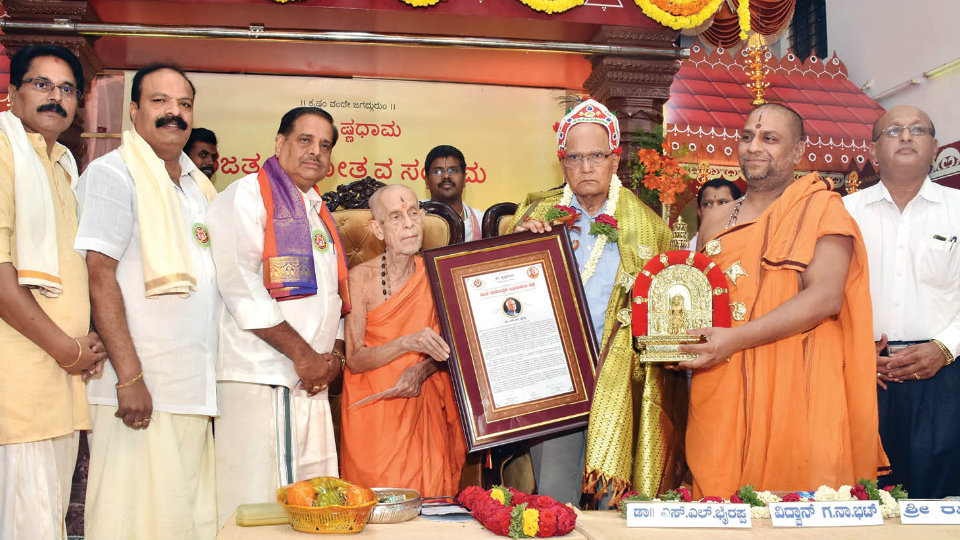 Mysuru:  “A good literary work can be evolved only through serious thoughts with substance which can be achieved only through a good study of philosophy,” opined renowned Novelist Dr. S.L. Bhyrappa. He was speaking after receiving the ‘Krishnanugraha’ award from Pejawar Seer Sri Vishwesha Theertha Swamiji on the 7th day of the 25th anniversary celebrations of Sri Krishna Dhama at its premises in Saraswathipuram here on Friday.

Dr. Bhyrappa contended that the root of philosophy is in Vedas. Philosophy when told directly is difficult to comprehend but easily understood if told in the form of a story which exactly was done by Valmiki, Vyasa, Kalidasa and others, he explained.

‘Never aspired to become a writer’

“I wanted to read philosophy and did not aspire to become a writer. I lost my mother when I was 10 and my 5-year-old brother when I was 15 and cremated him carrying the body on my shoulder. I have seen agony of witnessing death at a very young age. Questions like why death is imminent and what happens after death were bothering me always. Once in a month or two, I used to see my mother in my dreams which would close, the moment I tried to touch her and I used to curse myself.”

“I came to Mysuru for studies and asked Prof. Vamanacharya as to why death is inheritable. He gave me a book and asked me to read which I did but could not understand. Then he clarified that philosophy should be methodically studied to understand. Along with Indian Philosophy, I studied Western Philosophy which I taught also. I got a basic foundation through Philosophy. In the meanwhile I wrote ‘Vamshavruksha’ novel and then on, I learnt that I should take up writing and thus became a novelist recalled Dr. Bhyrappa.

‘Leftists not welcome in society’

“Just after Independence, Prime Minister late Jawaharlal Nehru popularised Marxist theory which influenced the newcomers. With inputs from Western literature, leftists started influencing the society and entered Universities too and Indian entity started becoming questionable. That was when I was growing as a novelist. Many commented that I am not a writer but just a debater. Newspapers too did not support me and my novels were not reviewed. I did not bother and went on growing in literary world with abundant readers. My novels were translated to Hindi, Marathi and other languages. Now Marxist and leftist theories have been rejected by Indian Society,” said Dr. Bhyrappa.

Dr. Bhyrappa said that Pejawar Seer has been holding a high esteem in society with thorough knowledge of literally every subject on the earth. “Fifteen days after my novel ‘Aavarana’ was published, the Swamiji called me and said that the novel should have been titled ‘Anaavarana.’ The Swamiji also advised me not to venture into early morning walks alone for six months after publication of ‘Aavarana’ and even suggested me to go for walk after sunrise with friends.”

Continuing. Dr. Bhyrappa said that the Swamiji is well-versed with Indain Philosophy and modern literature and open for debate on any topic and added that many fear to participate dreading to be defeated badly.

The valedictory of the 25th anniversary celebrations was held on June 1.

Speaking as the chief guest, District Minister G.T. Devegowda said that life is short which should be led with peace and harmony. To resolve the water crisis in city, he asserted that Undawadi Project would be the best solution.

Pejawar Seer Sri Vishwesha Theertha Swamiji said that ignorance should be burnt and not ‘Bhagavad Gita’ as someone had suggested. He likened the handle of a grinding stone to divinity which when held firmly can easily grind any hard substance.