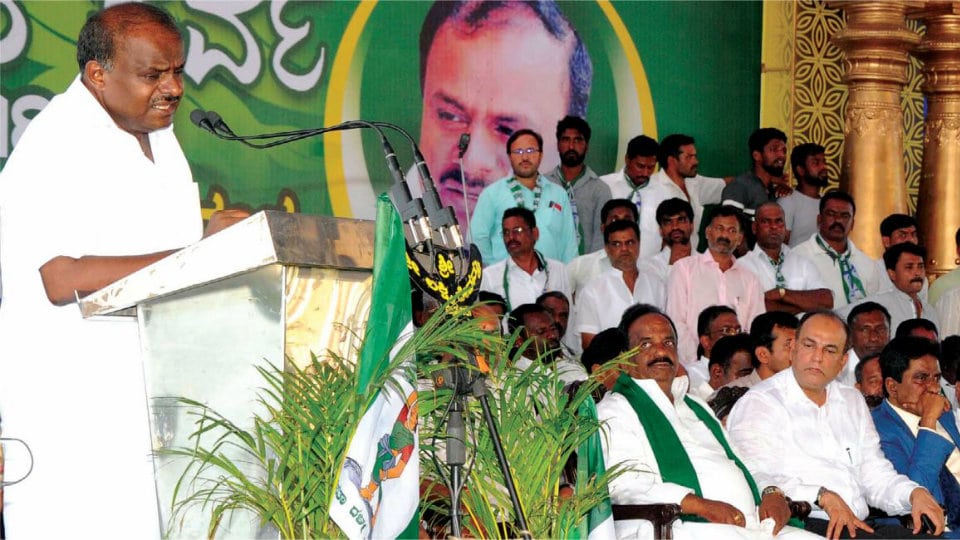 Mysuru: State JD(S) President and former CM H.D. Kumaraswamy (HDK) launched a tirade at Chief Minister Siddharamaiah saying that he would not be surprised if Siddharamaiah resorts to misuse the Government machinery to target JD(S) MLA G.T. Devegowda (GTD) representing Chamundeshwari constituency, from where the CM is planning to contest the 2018 Assembly polls.

“Siddharamaiah should understand that his arrogance and money power will not help him for long. When he resigned as JD(S) MLA , he even ditched the voters,” he said. The former CM further said that Siddharamaiah was taking the credit for Ksheera Bhagya, which is a result of the efforts of former Minister and his brother H.D. Revanna in putting the Karnataka Milk Federation (KMF), which was under huge losses, on the path of progress. But the CM has no gratitude to mention Revanna’s name, he said.

Maintaining that Siddharamaiah had not done anything for the farming community which was badly affected by successive droughts, he said that people have tried both the National parties — Congress and the BJP and should shower their love and affection on the JD(S) this time.

Asserting that the party will win 9 out of the 11 Assembly seats in the district, Kumaraswamy said that at the fag end of his tenure, Siddharamaiah has woken up to probe the cases against BJP leaders.

Terming leaders of both the Congress and BJP as corrupt, he said that the people are very much disillusioned about Siddharamaiah. Kumaraswamy appealed the people should bless the JD(S) with 113 seats to form a Government of its own.

GTD, in his address, said that the people of the constituency are determined to vote for the JD(S) and make Siddharamaiah lose his deposit.

Continuing, he said that Siddharamaiah’s ‘Anna Bhagya’ scheme is a result of the then Prime Minister H.D. Deve Gowda’s scheme to distribute rice to ration card holders. “Anna Bhagya rice comes from the Centre. But Siddharamaiah is taking the credit without any efforts by just giving it a name,” he alleged.

Earlier, the gathering observed a minute’s silence in memory of H.D. Kote MLA Chikkamadu, who passed away recently. The launch of the party’s election campaign, which was originally scheduled for Nov.3, had to be put off on account of the demise of Chikkamadu.