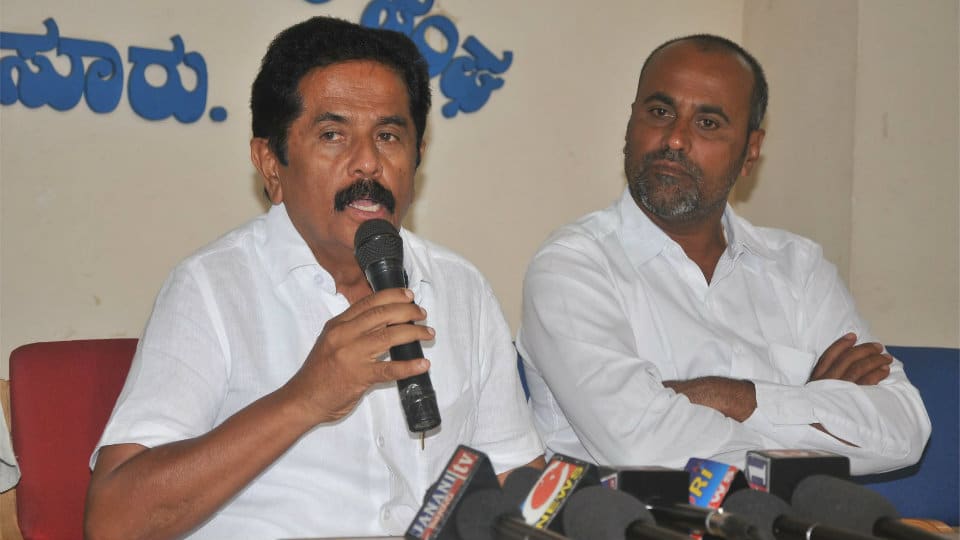 Addressing a hurriedly convened press conference at the Patrakarthara Bhavan here this morning, he said that Kurubarahalli Sy. No. 4 and Alanahalli Sy. No. 41 might have been inadvertently included in Survey No. 3 by the then Deputy Commissioner, which has led to so much of problems to the residents.

He said that after the meeting held in March at the CITB choultry in Siddarthanagar in which the Deputy Commissioner and other officials were present, he had prepared a report taking information from MUDA  and sent it to the DC and from there it was sent to the Regional Commissioner, who in turn had sent it to the Revenue Department Secretary Ramana Reddy.

Since there were writ petitions filed in the High Court, Ramana Reddy had called for a detailed report from the DC. In turn, the DC held a meeting yesterday (10.7.2017) with the MUDA Commissioner and a few others and gathered the details, he said.

In another 8-10 days, a couple of meetings will be held with the people concerned and the report will be sent to the Revenue Department Secretary in 10-12 days. Once this is completed, the report will be placed before the Cabinet and a proper decision taken to benefit the residents of Siddarthanagar, K.C. Layout, J.C. Nagar and Income Tax Layout, said Somashekar.

Somashekar also clarified that the 43 writ petitions filed in the High Court had nothing to do with the issue on hand.

However, he charged the BJP for making it a political issue and mislead the people. He asked, “When a more contentious issue like the Vijayashreepura Layout was solved amicably, is it not possible to find a solution to the Sy.No. 4 and Sy. No. 41 issue which is far less complicated.”

Kurubarahalli Hitharakshana Samithi convenor B.P. Manjunath said that the Samithi will stage a protest in front of MUDA office tomorrow at 10.30 am.