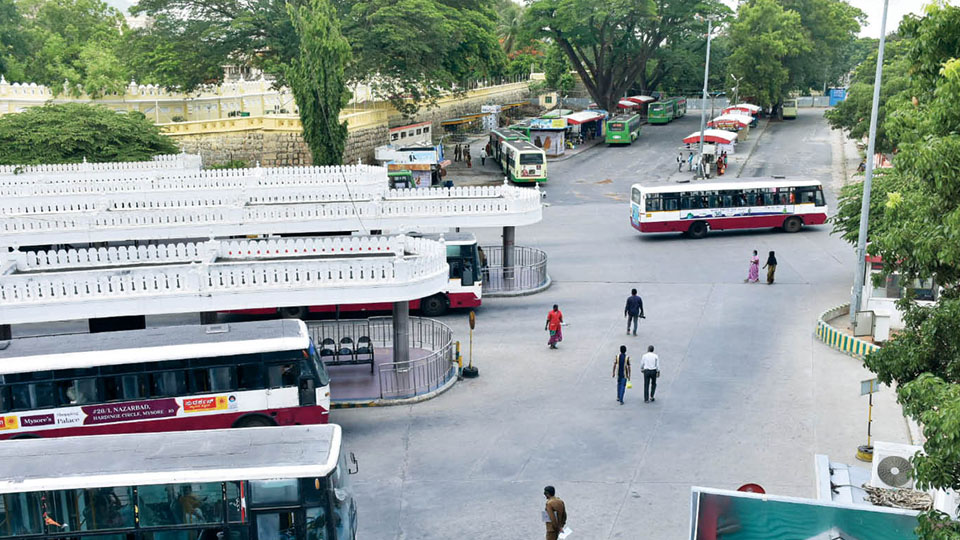 Mysore/Mysuru: The Sub-Urban and City Bus Stands witnessed poor passenger traffic as the Mysuru City and Rural Divisions of KSRTC resumed its services this morning after a gap of two months.

The KSRTC had suspended its services (both city and rural) on Apr. 28, following COVID induced lockdown in the district.

As the COVID positivity rate has reduced, the Government had announced Unlock 2.0 following which KSRTC authorities had announced the resumption of inter-city and inter-district bus services from today morning. However, inter-State service is yet to commence.

Though it was to be a sigh of relief to bus commuters, who travel daily to various destinations for their work, passenger traffic at the bus stands was minimum this morning and the bus stand wore a deserted look.

There are a total of 650 buses in KSRTC Rural Division plying on 700 routes and the Government has allowed only 50 percent passengers in each bus. Standing of passengers has been banned and wearing face mask and maintaining social distancing has been made compulsory for every passenger.

Due to lack of passengers, drivers had to wait for 50 percent seating capacity to be filled. Even the frequency of buses to various destinations was delayed. For example, earlier, Bengaluru-Mysuru Non-Stop buses used to leave Sub-Urban Bus Stand every five minutes, but today, the buses took at least 15 to 20 minutes to be 50 percent filled and only then the buses departed.

There was lack of passengers travelling to other districts too. But once there were about 15 passengers, they were allowed to proceed by picking up passengers at other bus stops on its way to its destination.

The passenger traffic at City Bus Stand too was minimal this morning. There are four City Bus Depots with a total of 432 buses plying on 375 city routes making 6,000 trips a day. But today, only 100 city buses have been permitted to ply to various city destinations.

The lack of passengers shows the fear of virus still in the minds of people. As there were no KSRTC services since Apr. 28, most bus commuters have been travelling in their own vehicles to various destinations for work. It is hoped that the passenger traffic may pick up in the days to come.

After each trip, every bus would be sprayed with disinfectants in both city and rural depots.

Drivers and conductors, who have received the first and second vaccine doses, will get first priority and a majority of them have taken the first dose and are waiting to receive the second dose.

It may be recalled that following the decision to resume KSRTC buses from today morning, the authorities had got the platforms, resting chairs and buses disinfected at Sub-Urban and City Bus Stands yesterday. Though bus services were suspended on Apr. 28, buses were regularly maintained by the mechanics to keep them in the good condition.