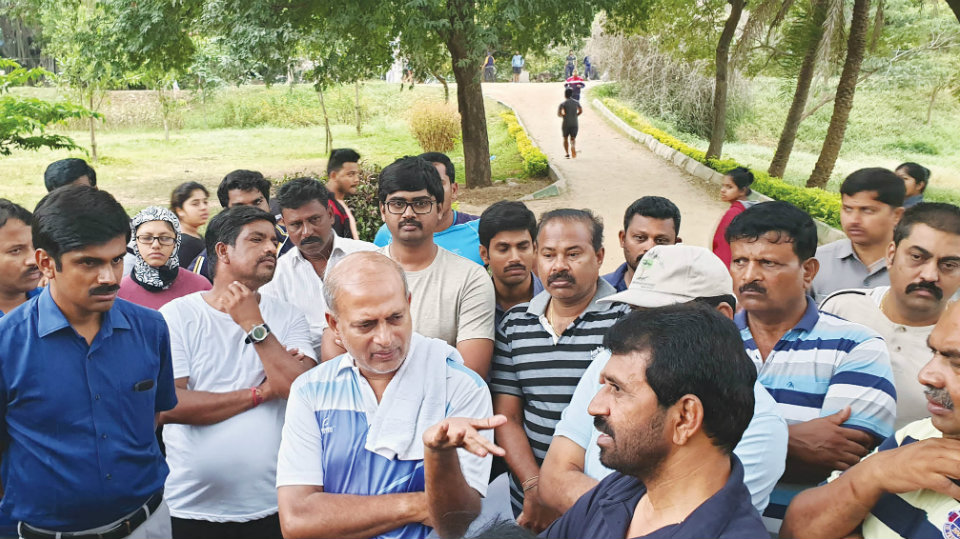 Mysuru: Walkers at the picturesque Kukkarahalli Lake had a pleasant surprise this morning as Tourism Minister S.R. Mahesh visited the Lake along with a battery of officials and interacted with the walkers and environmentalists.

The Minister inspected the development works of the Lake that had been carried out with a budgetary sanction of Rs. 2.9 crore. The funds for the work were released in 2009-2010 and the works have been carried out by the Technical Committee of University of Mysore. The University is the custodian of the Lake and is responsible for its maintenance.

The Minister was accompanied by MLA L. Nagendra, Tourism Department Director B. Ramu, Deputy Commissioner Abhiram G. Sankar, Deputy Director of Tourism Department H.P. Janardhan and other officials. The Minister was briefed by the officials that works including strengthening of Central Island, improvement of landscaping of wet land or buffer zone at the northern side of the Lake and construction of Adventure Park, Children’s Park, Bamboo Diversity Park, Gym Park and Butterfly Park had to be completed. 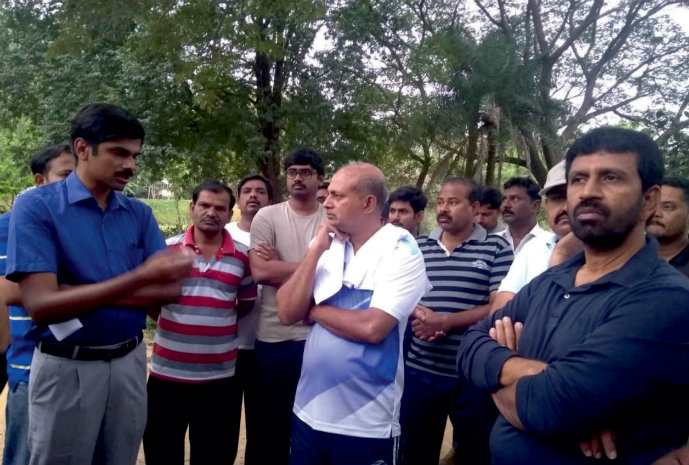 ADDITIONAL WORKS: The Minister directed the officials to utilise the pending fund of Rs. 45.7 lakh out of the Rs. 2.9 crore grants for the projects and assured that more funds will be released to make Kukkarahalli Lake to attract more and more visitors and tourists.

Karanji Lake Nature Park model will be the model for development, the Minister added. The Lake Rejuvenation and Conservation Committee headed by the Mysuru Zoo Executive Director will submit a report to the University of Mysore who can implement the project.

‘AVOID CONCRETE STRUCTURES’: As the Minister was discussing the development projects, environmentalists and walkers present at the venue asked Mahesh not to develop the Lake into a concrete jungle. As it is the Lake is polluted and more construction will ultimately kill the lung space, they said.

Responding to the concerns, the Minister told them that all works will be within eco-friendly norms and will not violate the green and water space.

SEWAGE FLOW: Green activists and Bhamy Shenoy of Mysore Grahakara Parishat drew the attention of the Minister to gallons of sewage and soap water flowing into the Lake every day. Due to the sewage water, hundreds of fish and rare pelicans are dying almost every other day, they said.

The Minister was told that unless the sewage water flowing from Jayalakshmipuram, Paduvarahalli and surrounding areas is not stopped, the Lake will never breathe back into life. DC Abhiram Sankar told the Minister that the District Administration was working on a project to minimise the sewage water flow and pump in fresh water.

DEWAN POORNAIAH CANAL :Environmental activists said that the Dewan Poornaiah Canal that brings in fresh water into the Kukkarahalli Lake has been encroached. Out of the 24 km canal, only 4 kms is remaining. “If the Lake has to live on for years to come then the Poornaiah canal must be revived after clearing all encroachments,” they told the Minister.