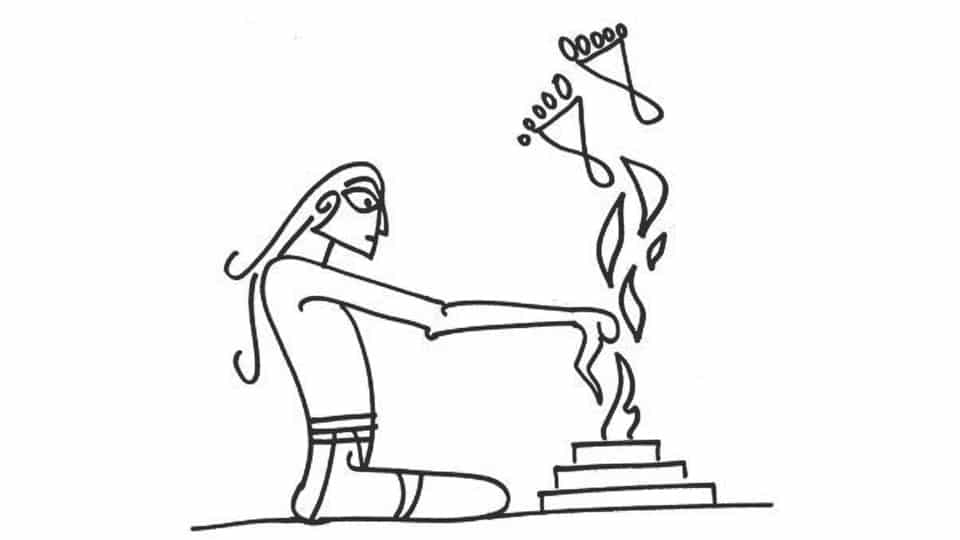 Last hymn of the Rig Veda

The Rig Veda has over a thousand hymns (sukta) that are arranged in ten chapters (mandala). The first and the tenth mandalas have precisely 191 hymns, indicating that the arrangement of hymns is not random, but deliberate. This organisation of hymns is attributed to Vyasa.

Internal evidence in the Rig Veda suggests that originally there were many tribes and clans in the region now known as Punjab. But 3,000 years ago, one tribe dominated: the Kurus, also known as the Bharatas, under the leadership of one Sudas, who was supported by a sage called Vasishtha. He defeated 10 kings who were supported by Vishwamitra. Vasistha and Vishwamitra were bitter rivals, an idea that germinates into a long narrative thread in Puranas composed much later. The ‘battle of ten kings’ perhaps inspired the later-day epic, Mahabharata. Perhaps the war was inconclusive, or so terrible for either side, that it was necessary for the victor to bring together the brutalised sides to agree on a common way forward. This led to the composition and/or selection of the final hymn that unites the divided. The victory also marked migration from rivers in Punjab region to Gangetic plains.

Of course, this is all speculation, as Vedic hymns are tough to translate. One is never sure, what to take literally, what to take metaphorically, or symbolically. But, what is interesting is the value placed on being united for the common good.

The hymn of eight lines states, and I paraphrase:

READ ALSO  How we are motivated by Kama & propelled by Yama

Over and over, fire-god, you gather what is precious for your friend

You who stand in the path of libation, bring goods to us.

As gods once came together to receive their portion

Common in utterance, common in assembly, common in thought and feeling

Common is your resolve, your heart joined in one accord

United in thoughts, so that it will go well for you together

The hymn reminds us of the fragmentation of every society, every family even. People have different ideas and drift away. Rather than collaborate, we combat. And we see this all around us as the European Union crumples, as the American President becomes belligerent, as States in India challenge the Centre, as opposition refuses to work with the government, as the Prime Minister prefers to talk at the Parliament rather than to it. As people drift away, or break asunder, it is time to sing hymns that motivate them to come closer together, like this the final hymn of the Rig Veda.

The very first hymn of the Rig Veda is also an invocation to the fire-god, Agni, who is seen as the mouth of the gods, through whom our offerings and petitions reach Indra and the other celestial devas such as Varuna and Mitra and Soma. But while the first hymn is clearly a private individual exercise, the last seems to be one inviting others to join in. Could this be the first Vedic anthem, a call to unite? We can only speculate..