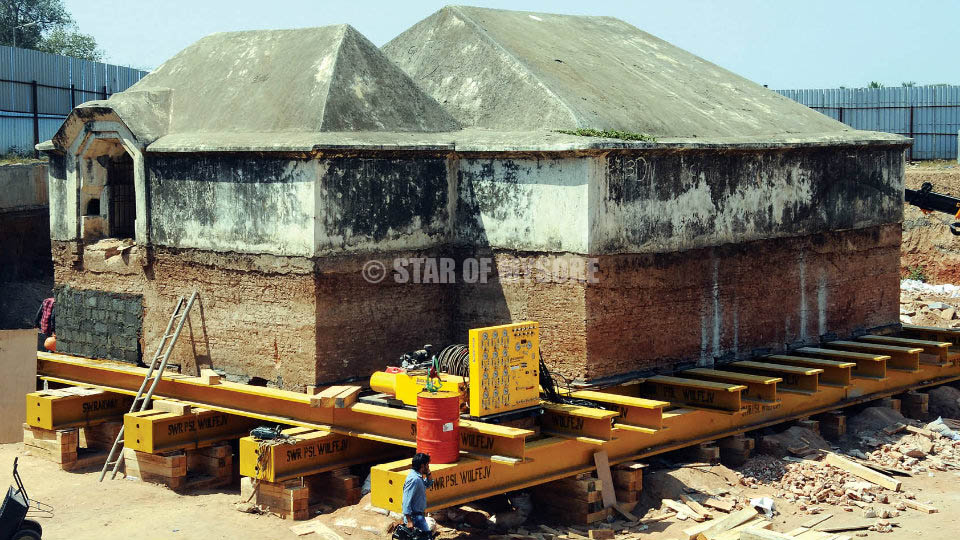 The translocation of Tipu Sultan’s armoury at Srirangapatna to pave way for the double-tracking work of the Mysuru-Bengaluru railway line will begin from March 3 and the process will be completed within two days. Architects, ground engineers and monument-shifting experts have already lifted the 1000-tonne armoury up to one foot and have placed the structure on a series of iron piers for support.

Mysuru-Kodagu MP Pratap Simha visited the site this morning along with railway engineers to check on the shifting work.

The MP told media persons that it would take the experts a maximum of two days to translocate the centuries-old armoury and placed about 100 metres from the double-tracking path.

Pratap Simha said that once the armoury is shifted, it will take one month to complete the double-tracking works. “Most likely, the tracking works will be completed by April end. The shifting will help the Railways complete the long-pending   13-km single-line track into a double line, which is part of the  Mysuru-Bengaluru track doubling,” he added. 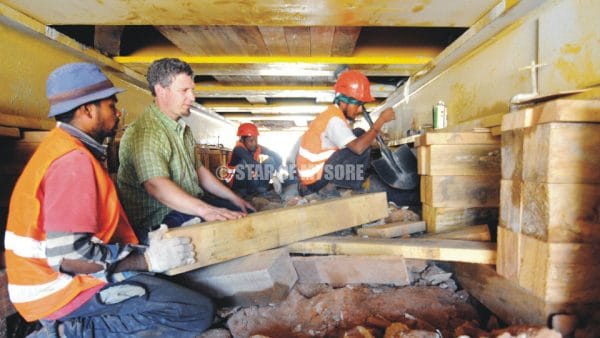 Engineers are seen supervising the insertion of wooden planks into the iron piers to enable the translocation of Tipu armoury in Srirangapatna this morning.

With the armoury situated near the Srirangapatna Railway Station, trains, all this while, had to take a detour at this spot and use the other line along this stretch. Once the shifting is over, all trains will run faster by three to five minutes, reducing the travel time to Bengaluru by 20 minutes, the MP said.

According to officials supervising the operations, the mechanism to be adopted for shifting the armoury as a single unit from the ground level is to insert the hydraulic jacks below the building in a unified manner and lift the structure in its entirety. It will be later shifted beyond 100 metres and preparations have been done to accommodate the armoury.

Digging works had begun five months ago and since the armoury is a semi-buried structure, experts had to carry out excavation work around the building. The path through which the armoury would be carried to the final shifting place has been readied and steel fabrics for all the beams have been fixed.

Translocation of structures using ‘Unified Jacking System’ is usually done in the US and the UK, but not in India. This is the first time such an exercise is being carried out here.