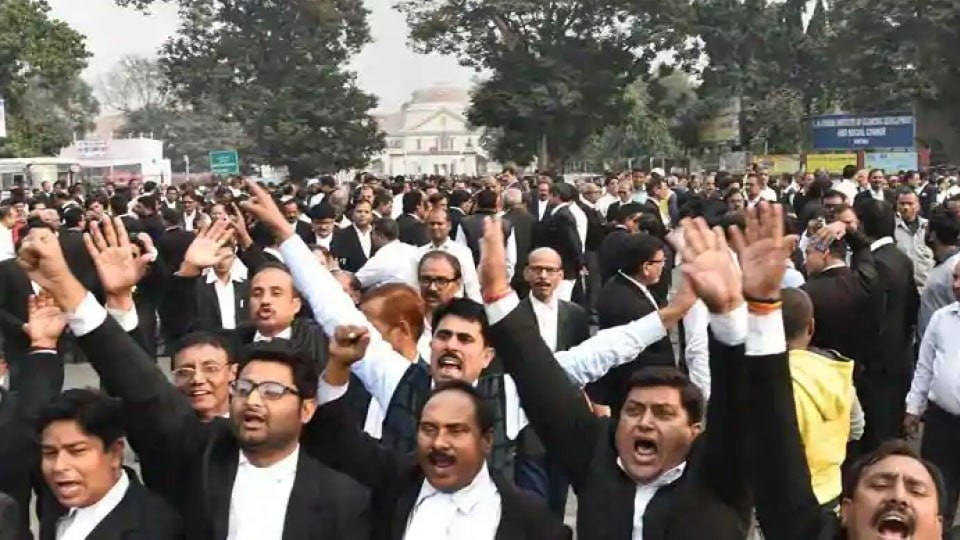 Lawyers, Cops and The Individual

Unimaginable things happen in our country.   Remember the scene news channels broadcast recently?  A uniformed Police Officer leaving the  premises of a Court in Delhi on his official bike is hit on the neck by a lawyer with other lawyers watching.  He slaps the officer on the face, then slaps him again.  The Officer takes the blows without a word and slowly drives away.  The lawyer throws a helmet at him as the bike turns into a drive way.  This was a scene that could fit into the Incredible India! advertisement series.

The scene was doubly incredible.  That lawyers can turn so violent is something that is difficult for the public to stomach.  That Policemen can quietly accept beating is almost impossible to stomach.  Citizens have only seen the Police functioning as a republic within a republic.  Usually,  the Police take people in for questioning and throw bodies out after questions have been answered.  So what turned wolves into lambs?  And what turned law-  keepers into law-breakers?

Lawyers taking law into their hands is not new.  Nor was it confined to Delhi. Something as silly as standing in a queue led to a lawyer-Police showdown at Chennai Airport in 2012.  The lawyer tried to jump the queue and the Police Officer, standing in the queue, objected.  Instead of falling in line quietly as normal citizens would do, this lawyer assaulted the Police guy.  When he was detained on that account, other lawyers held a dharna in protest.

In 2016, violence erupted between lawyers and journalists in Kerala over a case involving an advocate’s arrest in a molestation case.  Obviously, the lawyers wanted to hush up the case and found reporters an obstacle.  The violence was as bad as a war and several lawyers and journalists landed in hospital. A similar showdown had happened in Bangalore over the notorious Bellary mining baron Janardhan Reddy’s case.  A big fight broke out when he was produced in Court, developing into a riot as lawyers attacked reporters; Police had to resort to lathicharge and teargassing. Worse was the beating up of JNU hero Kanhaiya Kumar as he was being taken to Court.  Lawyers with no qualms about their BJP partisanship moved along with the crowd, repeatedly attacking the student leader. That was the first open demonstration by the BJP of its intention to subvert JNU.

READ ALSO  The dangers of Israelisation

All that paled into insignificance when lawyers in Delhi’s Tis Hazari Court took on Policemen. Nothing had happened to threaten the legal foundations of the Republic or to subvert the country’s Police network.  All that happened was that a lawyer couldn’t find a place to park his car. When he parked at a particular spot, a Policemen said that parking was not allowed there. The skies fell.

Lawyers collected en-masse and locked the gates of the compound preventing people from reaching the Courts.  They turned on the Policemen who were within sight. A Police van was set on fire and a dozen bikes vandalised. Later, Policemen went on strike demanding action against the lawyers. Their families gathered at India Gate with slogans like “We are humans, in Police uniform.”  Top Officers had to appear and pacify them. They announced ex-gratia compensation for Police personnel who were injured.  The Courts had handled such disputes in ways that showed closer understanding of lawyers’ problems than Policemen’s.

These were not only unprecedented events; they were also unbefitting a Democracy.  The worst aspect of the spat was that not a word came from the Home Minister of the country. Not only did the matter come directly under his portfolio; he was an acknowledged power centre rated virtually on par with the Prime Minister.  Yet he was silent.  He was also invisible at the height of the controversy.  In fact, WhereIsAmitShah became a hashtag.  Nor was anything heard from the Prime Minister, usually alive to solving the problems of the world.

READ ALSO  Lalu is natural target in the fight against corruption, but the problem is larger. All parties are guilty

Mohandas Gandhi was a practising attorney in South Africa before he returned home.  Jawaharlal Nehru was in the team of defence lawyers when the INA case came up in 1945.  Among other celebrities, Ram Jethmalani was loved for his eccentricities and no one grudges his fee of Rs. 25 lakh per appearance.

Does it all boil down to individuals?  Not all leaders are focussed on serving the people. Most have individual interests. Disraeli said: Only institutions, not individuals can create a nation.  Disraeli did not know India or its individuals.

Point of View T.J.S. George
City celebrates Constitution Day
“We The People”: The making of Indian Constitution and the forgotten Kannadiga who helped build India’s Democracy