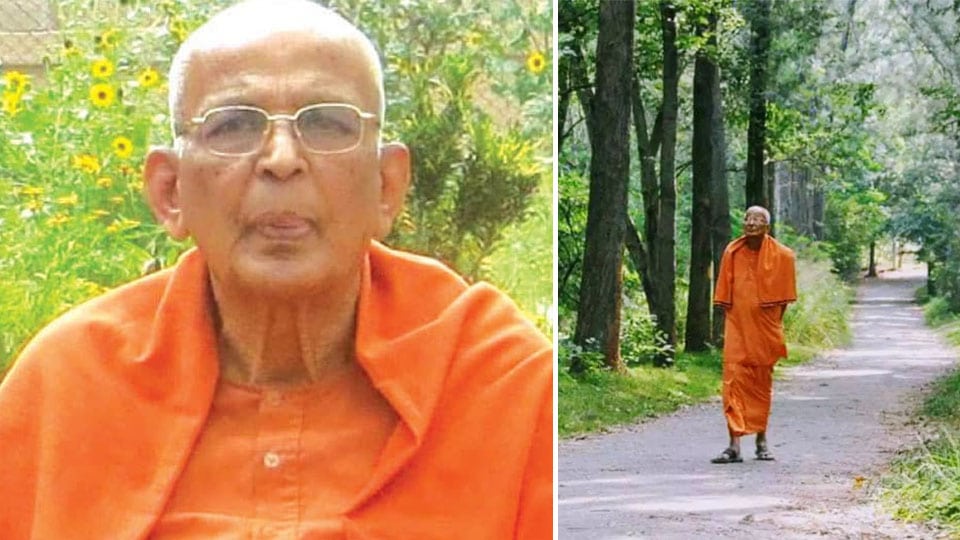 Leadership lessons a monk taught me

The word ‘Leader’ is usually associated with the CEO of a Corporation or with the Head of State, a Government organisation, NGO or political party.  It is used synonymously with a person holding a position of authority and is seen as a person with influence and power. It is rare that one can conceive of a religious figure or head of a faith-based organisation as a leader, in the same breath as people from the private or public sectors.

I had the good fortune and privilege of interacting closely with a monk for over three decades, during which my understanding of the role of a leader got formed and crystallised. Not only was I privy to his leadership style, but interactions with him were critical to my understanding of leadership and served as a living laboratory for several people like me. Swami Sureshanandaji, a senior monk of the Ramakrishna Order was the Correspondent of Sri Ramakrishna Vidyashala, a popular residential school in Mysuru when I met him for the first time in 1985.  During my initial days, I could only see the monk in him and respected him for his simplicity and spartan lifestyle. Over the years, as my understanding of leadership grew, I realised how much of a ‘leader’ he was and how subtly he had helped me understand the nuances of building and running an organisation.

From being a trusted advisor to a mentor, Swamiji knew exactly the role that he needed to play in a given situation. He had this unique ability to be both loving and firm with his students and mentees, while being very pragmatic in his advice to people like me when we sought his counsel.  Watching him deal with the numerous crisis that can emerge in running a large organisation — whether it was HR related, financial or statutory compliances — one felt as though management theories were constructed based on how he addressed the challenges. It is impressive what common sensical approaches grounded in practical experience can do, when a person is driven by organisational interests rather than one’s own.

Swamiji was very accessible to all and sundry who reached out to him and he had the knack of speaking to people’s experience. He would always start with what people knew and helped them understand what they did not know.  From providing a sustained presence and emotional support, he would gently nudge me to think of the larger system instead of merely focusing on only the immediate situation or a small piece of the canvas. Only later on reading ‘The Fifth Discipline’ by Peter Senge, the management expert, did I understand the systems thinking approach of Swamiji.

Whether it was conflicts that happened internally or issues that we had with external State-run agencies, he helped us see things in perspective.  He would be able to take a helicopter view of the situation, take a balanced view without taking sides and help all involved think objectively and resolve conflicts amicably.  His ability to listen deeply and without judgement was as impressive as the ease with which he could hold on to different views together at the same time. There were numerous times when I would go to him with strong views on what needed to be done, only to be gently shown the flaw in my logic.  Never do I remember him making me feel ashamed of the mistakes that I had inadvertently committed nor upset when I refused to heed his advice. He had his own way of gentle persuasion, but never let me lose my individuality or my independent thinking. It was not just his ability to teach non-intrusively that was remarkable; but his ability to learn too was legendary.  He had the humility to learn from just about anybody. What mattered to him was not the stature of the person teaching him, but of the content that he wanted to learn. He taught me how humility, willingness to learn and allowing oneself to be vulnerable were the hallmarks of leadership. To him, the pretension of knowing was a matter of greater shame than not knowing.

Rev. J. Carla Northcutt, a seminary professor had this to say about leadership, “The goal of many leaders is to get people to think more highly of the leader. The goal of a great leader is to help people to think more highly of themselves.” Swami Sureshanandaji personified this view of Carla Northcutt in the manner he built tens of leaders quietly and discretely.  He was convinced that the world needed ethical and value based people to lead and grow Institutions and a critical number would be essential to bring about meaningful societal change. Whether it was nudging successful alumni of the Vidyashala to start a social service organisation or getting multiple NGO leaders to form a federation, Swamiji worked to ensure that a generation of leaders were created in the social sector.

Apart from his strong ethical moorings, Swamiji was just and fair in all his dealings.  Whether it was the Chief Minister of the State or the gardener, he respected them all equally.  On asking him once on how he could live this philosophy of equality, his answer was simple but insightful.  He said that people may play different roles in life but that did not take away the fact that they were still people.  And in his own simple way, he could not see any difference between them as they were finally all the same.

I once asked him how he could offer SVYM and me such unconditional support.  He gently pointed out that it was wrong on my part to believe that he supported us.  He believed that all good work needed to be supported and we were just another instrument through which good could be done to society.   And he applied this principle with anyone that reached out to him for support. For him societal progress was the “work at the centre.” It was all about ‘nothing for me’ but ‘everything for the good of the world’.  And that is what truly took his leadership to another level. For, in the final understanding of leadership, it is all about living for others and finding purpose in leading a life that is beneficial to everyone around us.

And the final message that Swamiji kept reminding me was the dispensability of a leader.  He not only was an example of ensuring worthy successors for his work but showed the world what it is to live a life that does not seek any affirmation from position, title, role or authority.  And his life and the way he lived it is in itself a great leadership message for all.

[Dr. R. Balasubramaniam, the founder of Swami Vivekananda Youth Movement & GRAAM, teaches leadership at Cornell University and IIT-Delhi. He can be reached at [email protected]]