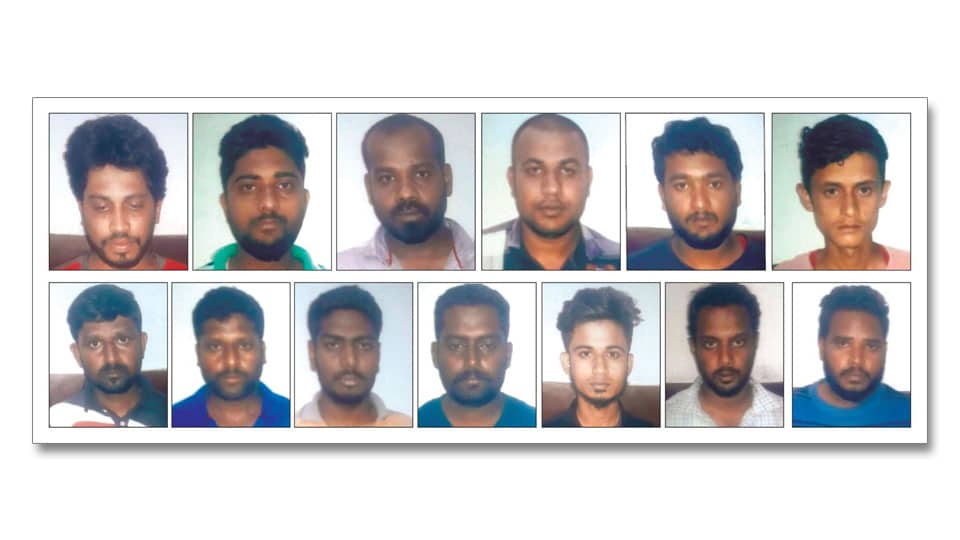 Mandya: It is hard to believe that a college lecturer, who is expected to teach morals and values to students, and a government employee, who usually leads a secure life with perks and pension, would be involved in dacoity. Sad but true.

The Mandya Police yesterday nabbed a gang of 13 dacoits and among them are a guest lecturer and a State Government employee.

The arrested have been identified as K.R. Karthik of Kothanahalli Village and a guest lecturer at Morarji Desai College in Maddur, C.N. Abhi alias Abhishek, a resident of Mandya Housing Board Colony and an employee of Mandya Veterinary Hospital, C. Anil Gowda, a resident of Hootagalli SRS Layout in Mysuru and N. Raghavendra, a resident of V.V. Nagar (Kallahalli) near Mandya.

The other accused are H.V. Rajesh of Shankar Mutt in Mandya, Rizwan Pasha of Azad Nagar in Mandya, N. Manu of Mothanahalli in Mandya, M.K. Shivaraju of T. Malligere, B. Ningegowda of Pandavapura, D.M. Nithin alias Naveen of Ramanagaram, M. Shreyas of Nelamangala, Yogesh alias Yogi of Ambedkar Nagar in Channapattana and Benedict, a resident of V. Nagenahalli in Bengaluru.

According to Mandya Police, the gang members used to target lonely houses and vehicles moving late in the night on the Bengaluru-Mysuru National Highway. Their modus operandi is to threaten the unsuspecting victims to rob them and if the victims resisted, they would not hesitate to kill them. The gang also used to target people who alight from night-service buses.

One Maruti Esteem car, one Toyota Etios car, four bikes, and deadly weapons like 3 ‘longs’ three daggers and other sharp-edged weapons have been seized. Mandya City Central Police Station Sub-Inspector Anand Gowda said that the Police were tracking the movements of the gang for quite some time and they had definite information about the gang plotting a crime yesterday near Ummadahalli Gate.

He said that the accused have been booked under IPC Sections 399 (making preparation to commit dacoity) and 402 (assembling for purpose of committing dacoity). Both the sections attract an imprisonment for a term which may extend from seven to ten years.