Home » News » Hooligans on the loose: Smash car with family inside 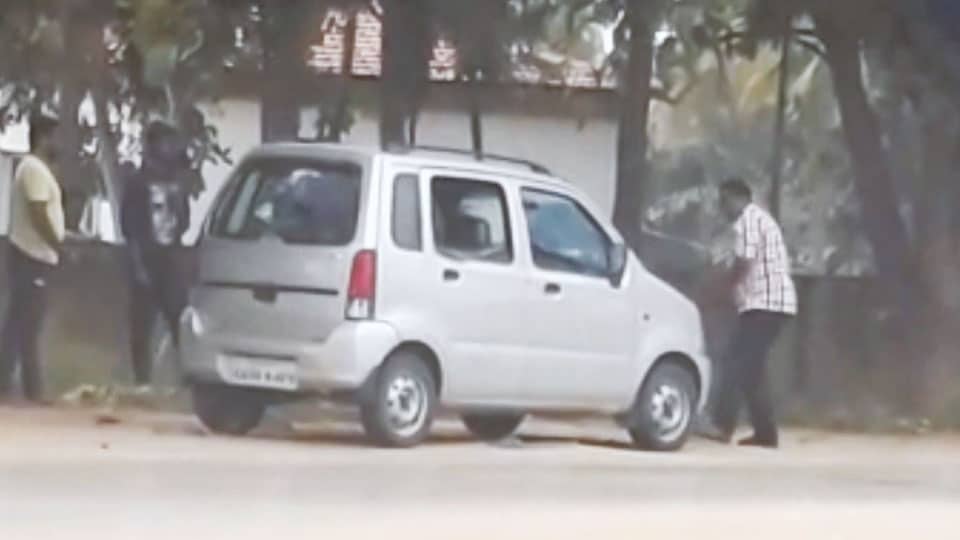 Hooligans on the loose: Smash car with family inside

Mysuru: A minor incident where a moving car touched a motorcycle took an ugly turn when the bike rider, teaming along with his friends, smashed the windshield and headlights of the car as the occupants watched in horror has been reported in the city. Three persons, including the prime accused, have now been arrested.

The filmy-style incident occurred in broad daylight yesterday at Siddartha Layout and the accused has been identified as Jayasheela, a resident of Vinaya Marga, and two of his friends. At around 10 am, Vinod Kumar, a resident of Gayathripuram, took his family out on a shopping trip in his Maruti Wagon ‘R’ car.

Vinod Kumar’s wife, two little children and his mother proceeded towards the city and after some shopping, reached the Lalitha Mahal Palace Road at around 11.30 am. As they were proceeding towards Karanji Lake signal to reach T. Narasipur, their car inadvertently touched Jayasheela’s bike that was coming from the opposite side.

It was a minor incident and Vinod Kumar did not even notice that his car had touched the bike. Enraged by the incident, Jayasheela started following the car and at the same time informed his friends about the incident. After following the car for some distance, Jayasheela overtook the car and blocked its way. He accused Vinod Kumar of damaging his bike.

As Vinod was trying to explain, Jayasheela’s friends arrived and they picked up a fight. Scared by their accusations and filthy words, Vinod Kumar closed the rear windows of the car. An enraged Jayasheela and his friends got clubs from their vehicles and smashed the windshield, headlights and windows of the car as Vinod    and his family members ducked for cover.

Their ordeal did not end here. Jayasheela and his friends dragged Vinod Kumar out of his car and assaulted him.

Though the women and children cried out for help, no passers-by came to their rescue (instead, they were seen taking photos and videos) and the accused beat up Vinod Kumar. They used expletives at the family members and even threatened to cause them harm in the future.

Shaken by the incident, Vinod Kumar and his family cancelled their T. Narasipur trip and headed to Nazarbad Police to lodge a complaint. Acting on the compliant, Inspector Shekhar ordered a medical test and registered a case.

The Police arrested Jayasheela who was on the run late yesterday night. The other two accused were arrested this morning.

Inspector Shekhar told Star of Mysore that the accused blew the minor incident out of proportion and acted in an outrageous manner in full public view.

“They damaged the car in front of the family, terrorising them and used filthy language, apart from assaulting Vinod Kumar. We will book cases of assault, abuse and manhandling and also open ‘Rowdy Sheets’ against the accused,” he said.