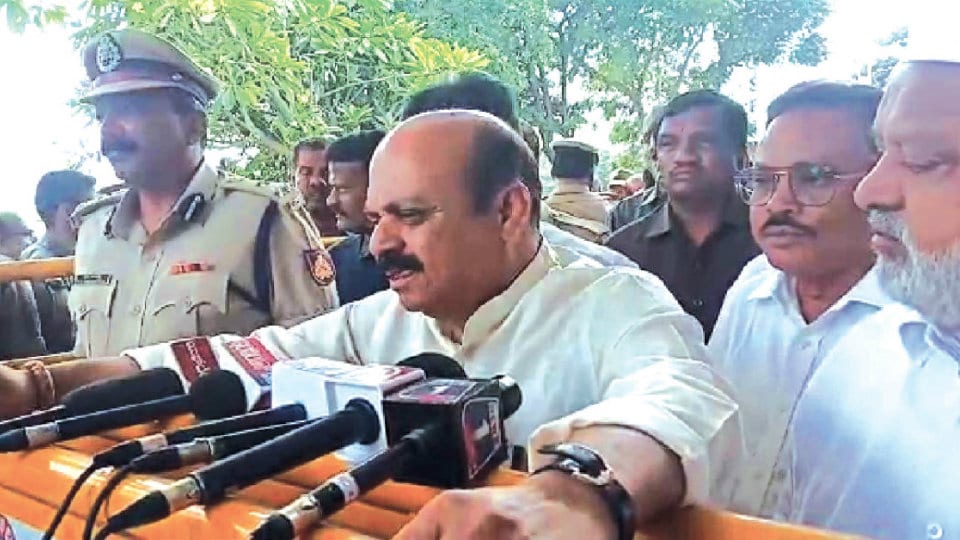 Sait will be shifted to ward in a day or two: Dr. Upendra Shenoy

Mysuru: Home Minister Basavaraj Bommai, accompanied by MLA L. Nagendra, visited Columbia Asia Hospital this morning and enquired the health condition of Tanveer Sait, who was assaulted with a cleaver on Sunday night during a wedding reception at Bannimantap grounds.

Speaking to the media after coming out of the hospital, the Home Minister said that the Police investigations have revealed that the arrested accused was active in PFI and SDPI organisations besides stating that differences in ideologies and political competition had led to such an inhuman act.

Stating that the probe would be completed in two days, the Home Minister said that there may be a link between the attack on the MLA and Raju Murder case and other such murders in Bengaluru and hence the probe has been intensified.

Minister Bommai said that if the involvement of organisations are found to be true after the probe is completed, action would be taken to ban such organisations.

Speaking about the health condition of Sait, Bommai said that the MLA walked around the ward and his breathing is normal besides stating that Sait consumed breakfast by sitting on the chair and there was no need to be anxious about his health as his heath condition was improving.

Meanwhile, Columbia Asia Hospital Chief Dr. Upendra Shenoy yesterday said that the health condition of MLA Tanveer Sait was improving and would be shifted to the ward from the Intensive Care Unit (ICU) in a day or two.

Dr. Shenoy said that the health condition of Sait was better than the previous day and the wound was dressed. He further said that Sait got up from the bed and sat on a chair for some time besides stating that there was no need to panic about the conditions of his organs including kidneys.

The doctor further stated that ventilator has been removed and only oxygen mask has been put. The wound on his neck has to completely heal and there are chances of infection to his respiratory tract hence treatment is being given very carefully, he said and added that there is no need for surgeries besides stating that Sait would be shifted to the ward in a day or two and his health would be observed. Sait may be discharged from the Hospital in two week’s time.

Dr. Shenoy, giving details about the wound caused by the cleaver, said that the wound is two inches deep that required eight to 10 stitches. His earlobe was cut and stitches have been put and there is no damage to his nerves, he said and added that there is no requirement for special treatment.

Continuing, Dr. Shenoy said that if necessary, doctors would be summoned from other hospitals or Sait would be shifted to a different hospital and added that Sait’s family members have asked them to continue the treatment at the same hospital.

Sait is recuperating and is out of danger at present, Dr. Upendra Shenoy said.

A media briefing about the health condition of Sait would be conducted by Dr. Shenoy later in the day and Police security will continue at the hospital, Sait’s residence and at sensitive places in Udayagiri, Mandi Mohalla and Nazarbad Police limits.