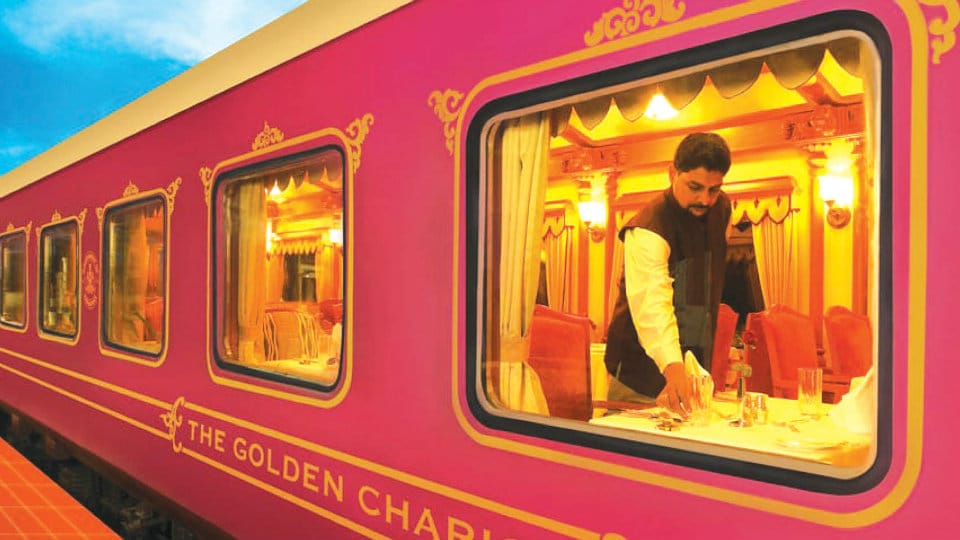 Bengaluru: Golden Chariot, South India’s only luxury train, has officially been taken over by Indian Railway Catering and Tourism Corporation (IRCTC). The Golden Chariot, offers an insight into treasure trove of archaeological wealth and a kaleidoscope of culture for its esteemed guests.

The Karnataka State Tourism Development Corporation (KSTDC) signed an agreement with the IRCTC in New Delhi yesterday, according to which the Tourism Corporation will take over the marketing and operations of the luxury train.

The Golden Chariot, which completed a decade’s run across Karnataka and other Southern States, was not operated in the last season (October to March) as the train was being refurbished and a new agency was being finalised. This year, after the new BJP Government took office, it decided to temporarily suspend operations in the wake of losses amounting to Rs. 41 crore.

The train’s occupancy rate was less than half on an average. The State Tourism Board will also work towards bringing in local experiences to the itineraries. The train has already undergone refurbishments after its 10-year run. Above all, it is the occupancy rates that the Government is looking to improve. The Golden Chariot’s average occupancy rate has been a meagre 34%, which, along with the huge haulage charges paid to the Railways, were major causes for making it a financial drain.

Among the changes one can expect now that the IRCTC is on board is a change in tours, and possibly the prices. The IRCTC is contemplating lowering tariffs of the Golden Chariot without compromising on the quality.

The 2018-19 season tariffs ranged from Rs. 3.85 lakh to Rs. 6.8 lakh for foreign passport holders and between Rs. 2.45 lakh to Rs. 3.78 lakh for Indian nationals. The IRCTC and KSTDC are targeting first operations of the train during February-March until April, but only the Karnataka-Goa circuit may be run to begin with.

Earlier, two tours were being run: Pride of South (Bengaluru, Kabini, Mysuru, Hassan, Hampi, Badami, and Goa) and Southern Splendour (Bengaluru, Chennai, Mahabalipuram, Puducherry, Tanjavoor, Madurai, Thiruvananthapuram, Kovalam, and Kochi). Vijayapura could be added to the Pride of South tour, which is likely to be renamed as Pride of Karnataka.