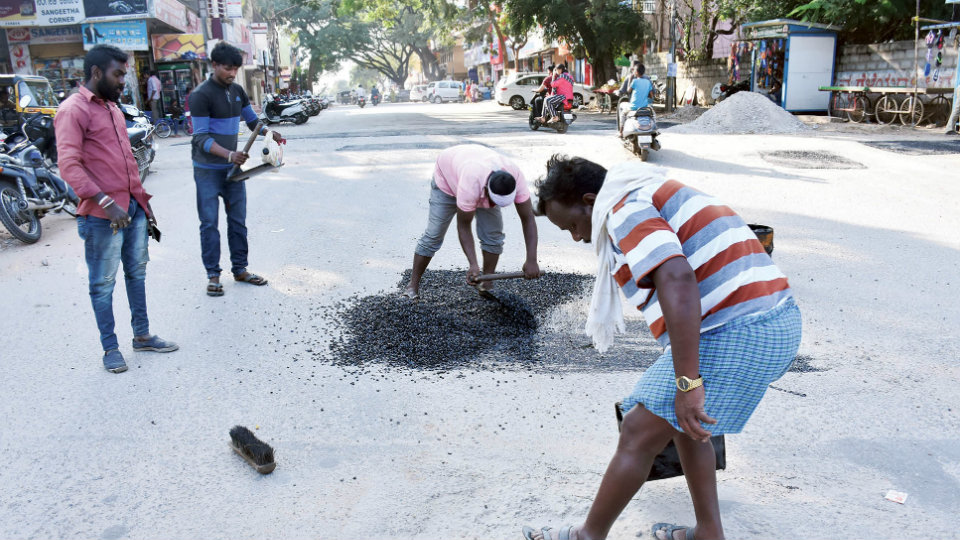 Mysuru: With rains relenting, the Mysuru City Corporation (MCC) has begun filling up pothole-ridden roads across the city on a war footing. Works are on in all 65 wards where workers, armed with shovels, asphalt-mixed jelly stones in vehicles, are filling up knee-deep potholes which were waiting for victims, especially two-wheeler riders who find manoeuvring on the city’s roads treacherous.

Though it was a nightmare for motorists to ply on these roads, the MCC had been citing rains as the reason for non-filling of potholes.

However, the MCC is only doing patchwork, instead of re-laying that particular stretch of the road. Officials said that the entire pothole-filling task will be completed in another 10 to 15 days.

Usually, the MCC would take up road repair works during Dasara every year. But, this time, only major roads were asphalted for Dasara due to incessant rains. In some areas, the Civic Body had tried to temporarily fill potholes with mud, sand and powdered construction material. However, this plan too did not work out as the potholes re-appearing in no time, forcing the MCC to fill the potholes with asphalt and jelly stones.

Speaking to Star of Mysore this morning, MCC Superintending Engineer, also Deputy Commissioner (Development) M.K. Bhaskar said that the filling of potholes was delayed due to continuous rains. “We have taken up the works since last four days. It needs 10 to 15 days to complete. Each ward has been given a grant of Rs. 5 lakh and works are on in all the 65 wards. The MCC is spending Rs. 3.25 crore,” he said.

Tenders for pothole-filling in all the wards were called during Dasara and the money was sanctioned. Works are awarded through tenders to different agencies to ensure speedy work and no piece work is awarded. The work has been awarded ward-wise as per the advice of the respective Ward Corporator and Zonal Engineer, he said.

“We were waiting for the rains to relent to complete the works otherwise the effort would go waste All those potholes that have formed after Dasara will be identified by the respective Ward Assistant Engineers and Junior Engineers and report to the Superintending Engineer. Again tenders will be called to fill them,” he added.

“Contractors have been directed to ensure quality and we will monitor the works regularly. There are multiple checks to assess the quality. We have provided details of potholes and contractors must take up the works as per the standard specifications,” Bhaskar added.

Each pothole has to be cut open, deepened before filling it with bitumen similar to the composition while laying the road. Unlike the past, the work has been awarded ward-wise to each agency to ensure faster completion and there is no piecework format involved here.