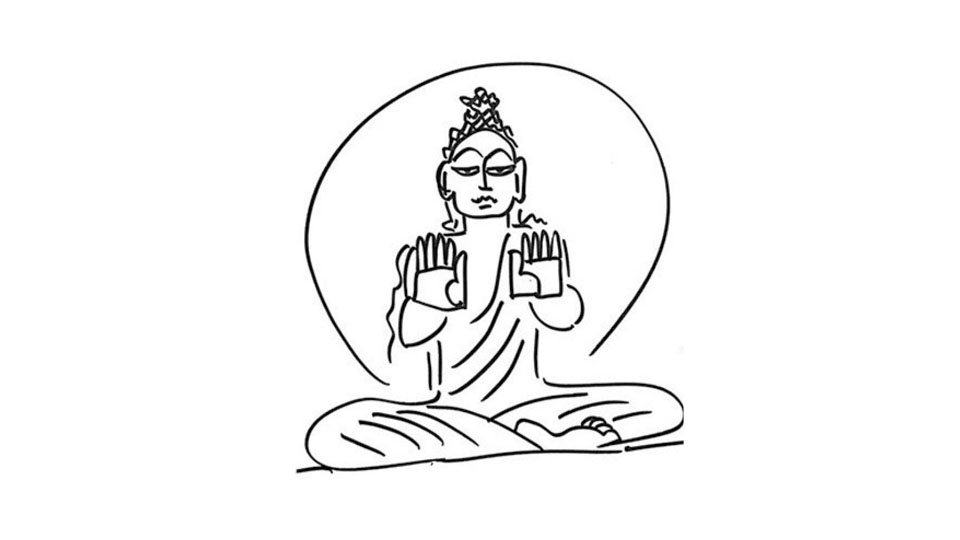 Listening to the Buddha’s hands

In the early days of Buddhism, Buddha was represented by a symbol: a footprint or a wheel or a pot or a tree. Later, less than 2,000 years ago, we see the earliest images of the Buddha in the Gandhara region (modern Pakistan and Afghanistan) as a Greek God. Simultaneously, Buddha images started appearing in the Gangetic plains around Mathura, where red stone was used. Unlike the Gandharan Buddha, where the shoulders were covered with cloth, in Mathura, the upper garment was draped only over the left shoulder, suggesting the influence of the Brahmin thread that hung over the left shoulder. In Mathura, Buddha was made to sit on a lotus, with a serpent behind him.

Since then, Buddha images have been crafted around the world, from Central Asia to China, to South East Asia. While, to the untrained eye, all Buddha images look similar, with languid eyes and long ears, a sensitive eye will notice huge differences — different postures, different gestures. In Thailand, different Buddhas are venerated on different days of the week, with two on Wednesdays, one before noon, one after noon. There are images of Buddha seated, meditating or giving a discourse. There are images of him standing, as if facing his students, or his enemies. Then there is the reclining Buddha, resting his head on his right arm, as he prepares to die. The walking Buddha is popular in Thailand, reminding us of him pacing after his awakening as he wondered what to do next. In the seated position, there is the double lotus pose where the two ankles are locked in, and one can see both feet, soles almost at the same level. Then there is the single lotus position where one foot is above the other. Then come the gestures of the Buddha. When they are placed one on top of the other on his lap, he is meditating. When the right hand touches the ground, palm inward, it means he is inviting the earth to witness his awakening. When the right hand points down, palm outward, he is offering solutions. In this position, he is often holding a bowl in his left hand placed on his lap. His right arm can be raised with hand at chest level, palm outward, indicating protection. If the thumb and index finger form a circle, it indicates the revelation of knowledge. If this is done in both hands, and the two circles touch each other, it reveals the turning of the dharma wheel. In the standing Buddha, we find images where Buddha holds a bowl in his hand to receive offerings by lay people who want to earn good karma. Or his palms, facing inwards, are crossed at his heart, indicating contemplation. Or his palms, facing outwards, are raised at chest level, to stop people from fighting, and to keep away negative forces. Buddha images are often confused with those of Bodhisattva portrayals, which tend to have multiple heads, multiple arms, more dancer-like wavy positions, holding lotus flowers (Padmapani) or the thunderbolt (Vajrapani). These were popular in Mahayana and Vajrayana Buddhism that flourished in the Himalayan regions.

In China, the female form of the wish-fulfilling Kwan Yin became very popular. The obese Laughing ‘Buddha’ is actually a Chinese Buddhist monk whose wisdom expressed itself through laughter.