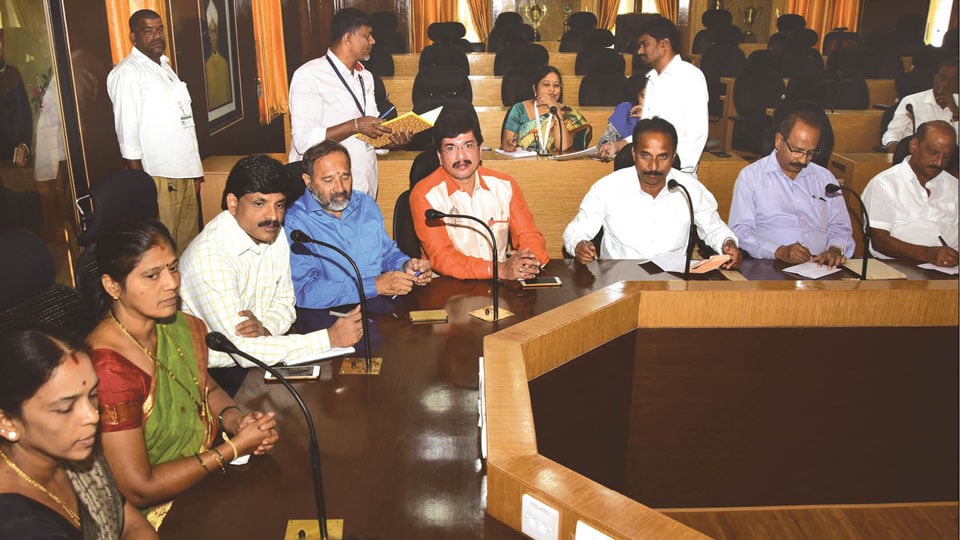 Mysuru: In the context of the annual Budget of Mysuru City Corporation (MCC) to be presented later in the month, a preliminary consultation meeting was organised by MCC at the Old Council Hall yesterday to elicit opinions and suggestions from the public on the  Budget content.

The meeting was chaired by Mayor S. Bhagyavathi. The participation of citizens was said to be very poor as only a few had turned up for the meeting which obviously went ahead with Corporators and officers coming out with suggestions for the Budget.

The participants at the meeting came out with a general opinion that the Budget should be realistic giving no room for  exaggeration or fiction.

Realistic Budget: Former Mayor R. Lingappa opined that the Budget should be proportional to the expected revenue and ridiculed deliberately inflated figures.

Former Mayor B.L. Bhyrappa alleged that MCC officers were lax in collecting taxes and added that transfer of layouts to MCC was not happening in order thus depriving revenue.

READ ALSO  MCC pulls up its socks ahead of Vice-President’s visit; cleans roads

Lower Budget size: MCC Chief Accounts Officer D.O. Krishnaswamy said that the expected size of the Budget for 2018-19 will be Rs.600 crore, lesser   by Rs. 200 crore compared to the Budget last year.

Deputy Mayor Indira Mahesh and others were present during  the meeting.

President of Contractors Association Chandrashekaraiah complained that bills on works completed two to three years ago were not cleared putting small contractors in deep trouble. He pointed out that fresh tenders were invited without clearing the old bills.

Jagadeesha said that about Rs.130 crore was pending payment for contractors for technical glitches and assured to clear them by March end.

Former Deputy Mayor Mahadevappa alleged that anomalies were aplenty in allocation of funds to all the 65 Wards in proportion to the population. He added that fund utilisation was not properly monitored.

Former Mayor H.N. Srikantaiah alleged that 75% revenue was being collected earlier from just three zones which now stands at nine with lower revenue collection, an irony indeed. He squarely blamed the officers for poor revenue collection.

Siddarthanagar Tax Payers Association President Srikantaswamy urged the MCC officials to solve the issue of Kurubarahalli Survey No.4 and Alanahalli Survey No. 41 which are dragging for the last six years at least before the Assembly polls. He pointed out that the residents in the said layouts were inconvenienced a lot as all revenue dealings have been put on hold. He reminded that the said area residents have even threatened to boycott the polls if the matter as not resolved. He contended that MCC would get a revenue of about Rs. 4 crore annually if the issue was sorted out.