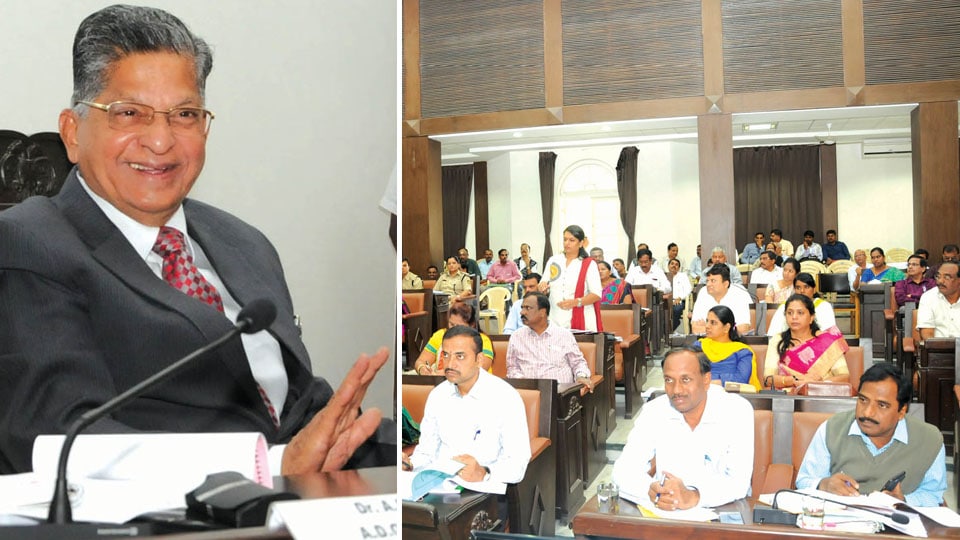 ‘Lokayukta is striving hard to bring down inquiry proceedings’

PMysuru:  Karnataka Lokayukta P. Vishwanath Shetty informed that he has been making all efforts to bring down the inquiry proceedings besides clearing cases pending before the Lokayukta Court to improve the administration in the State.

Addressing a press conference after chairing the district-level officials meeting held at Zilla Panchayat Hall here yesterday, he said that the co-operation of the public and media is must to ensure corruption-free administration. Instead of encouraging corruption, people should bring cases to Lokayukta to rein-in corrupt officials.

Brushing aside the allegations that constitution of Anti-Corruption Bureau (ACB)  had weakened Lokayukta, Vishwanath Shetty said that people should not lose faith in the Lokayukta which is continuing its duty as per Government norms.

“The Karnataka Lokayukta is awaiting the judgment of the High Court for clarity on its investigation powers under the Prevention of Corruption Act, 1988.  However, I won’t speak much on this issue as the matter was before the Court,” the Lokayukta said.

“We have filed more than 40-page statement before the High Court in September 2018, the Lokayukta had contended that an Investigating Officer under the State’s ACB cannot be expected to conduct a fair and impartial inquiry against high-ranking public servants when he or she will be working under the disciplinary control of the Home Department or the State government,” he said and added: “As an individual, I have never felt that the Lokayukta has been weakened. I am working to the fullest capacity to make use of the powers conferred to me under the Act,” he said.

While the matter related to investigation powers under the Prevention of Corruption Act is before the Court, Shetty said that the Lokayukta still enjoyed the jurisdiction of acting against indiscipline and misconduct by Government employees.

The disciplinary jurisdiction is still with the Lokayukta, he said and added that the Lokayukta Police in all the District Headquarters had been instructed to visit all Government offices in the district and send reports.

However, unlike his predecessors, who used to raid government officials and go public, the Lokayukta said he shuns publicity and wanted to work silently. The earlier Lokayuktas used to go to the media because they were carrying out raids, he said.

He said that he had visited almost all the districts in the State after he took up the mantle and had held meetings with the district-level officials.

“I have taken the officials into confidence, motivated them and have asked them to provide good administration. The State is facing the scarcity of the staff in Government machinery. However, I will hold a public hearing in each district.  I have been making all efforts to sensitise the officials to get peoples work done in all districts including Mysuru”, he said.

Shetty said that the toughest challenge before the Lokayukta is to deal with the pending cases. Inquiry proceedings against Government officials are pending since 2002, he said.

Stating that the previous Government had given only four Judges in place of nine Judges he had requested to clear the cases pending in the Lokayukta Court in various districts, Shetty said, “I hope the present Government will sanction remaining five Judges sought by me very shortly which would help to complete inquiry of the pending cases.”