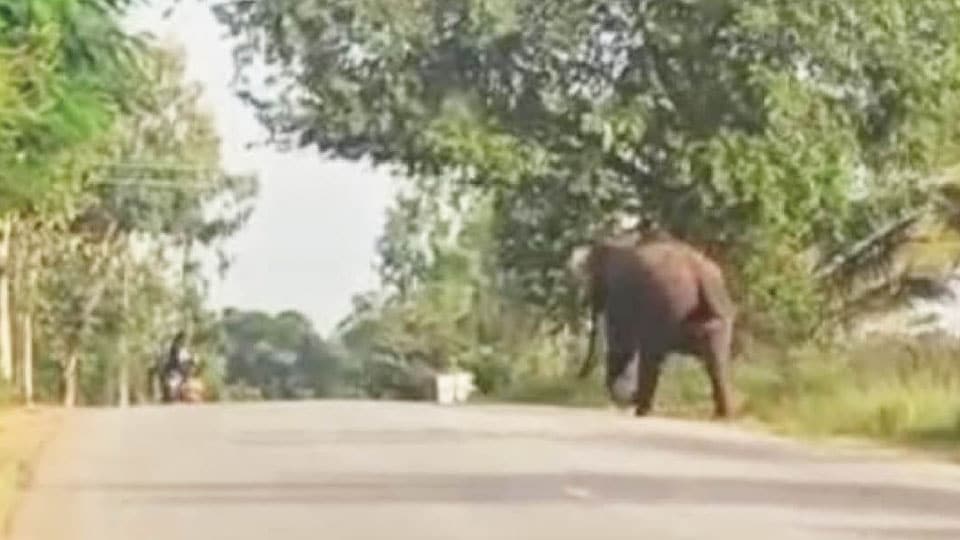 K.R. Pet: Tension prevailed among the villagers of Chikkonahalli near Pura village in K.R. Pet taluk, after a lone tusker was spotted in the wee hours yesterday.

The villagers, who got panicked, immediately informed the matter to the Forest Department officials that the tusker was spotted moving from Teganahalli Gate towards the forest in Karoti village.

A team of Forest staff led by Range Forest Officer (RFO) Gangadhar, immediately swung into action and based on the information provided by the villagers, has launched a combing operation to capture the tusker.

Forest officials urge villagers not to disturb the tusker

Meanwhile, the Forest Department officials have urged the villagers not to disturb or agitate the tusker by shouting or throwing stones at it as the elephant may get agitated and attack them.

Forest officials said that an elephant had got separated from its herd in Huliyuru Durga Forest a few days back and was spotted at Mallasanda Kaval of Devalapura in Nagamangala taluk. The same elephant, after crossing Jalasuru-Bengaluru Highway had entered K.R. Pet Taluk and was spotted by the villagers at Chikkonahalli near Pura village.

The officials further said that the tusker had stayed put in the forest near Karoti village and the Forest staff have sent back villagers working in agricultural fields nearby as a precautionary step. To prevent any untoward incidents from taking place, Forest staff has been deployed in the surroundings of the forest area near Karoti village, the Forest officials added.

The Forest officials have advised the villagers to stay indoors and not to venture outside till the tusker moves out of the area.