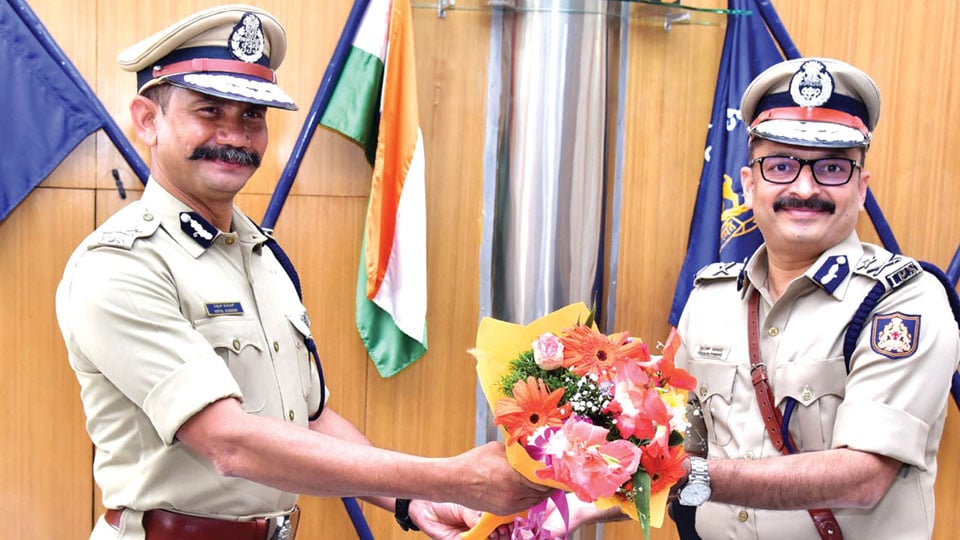 Mysore/Mysuru: A day after his posting, Praveen Madhukar Pawar on Friday took charge as IGP (Southern Range), Mysuru, in place of Vipul Kumar, who has been transferred and posted as the Director of Karnataka Police Academy (KPA), Mysuru. Superintendent of Police (SP) C.B. Ryshyanth handed over the charge to the new IGP.

Pawar was among 15 IPS officers transferred by the Government in a major reshuffle on Thursday.

Speaking after taking charge,  Madhukar Pawar said that his first priority would be maintenance of Law and Order in the Range which has jurisdiction over five Districts — Mysuru, Mandya, Hassan, Chamarajanagar and Kodagu.

Maintaining that he has zero tolerance for matka, gambling, betting  rackets and all other such illegal activities, Pawar said that stern action will be taken against law-breakers and anti-social elements.

Asserting that fixing any lapses in the system is among his other priorities, he said that Police job has greater responsibilities and the department would quickly respond to public complaints.

He further said that modern technology will be  effectively used for prevention and detection of crimes.

Profile: Praveen Madhukar Pawar, a native of  Rathnagiri in Maharashtra, is a 2003 batch IPS officer of Karnataka Cadre. A BE Graduate in Electronics, Pawar began his career in the IPS by serving as ASP at Chikkamagalur and later as SP at Koppal, Udupi and Kalaburagi.

He later went on a Central  deputation and worked as Joint Director of Enforcement Directorate (ED) at Panaji, where he was incharge of Goa and Chhattisgarh States. During his service at ED, Pawar investigated 8 cases of Coal Block allocation scam and subsequently attached properties collectively worth over Rs.1,000 crore.

After returning from Central deputation a few years ago, he served as DIG, CID and DIG-Recruitment at Bengaluru. Now he has been promoted as IGP and posted as IGP, Southern Range at Mysuru.

In other transfers at the top level of Police Department in the fag end of the year, the State Government on Thursday transferred senior IPS Officers Hemant Nimbalkar and D. Roopa, who have been at loggerheads trading allegations regarding Nirbhaya Safe City Project tender over the past few days. While Hemant Nimbalkar, who was serving as Additional Commissioner of Police (Administration) at Bengaluru, has been posted as IGP (Internal Security Division) at Bengaluru, Roopa, who was serving as Secretary to Government (PCAS), Home Department, has been posted as Managing Director of Karnataka State Handicrafts Development Corporation at Bengaluru.

Senior IPS Officer Malini Krishnamurthy has been posted as Principal Secretary to Government (PCAS), Home Department, in the upgraded post following the transfer of Roopa. Mangaluru Police Commissioner Vikash Kumar Vikash has been transferred and posted as DIG, KSRP at Bengaluru.