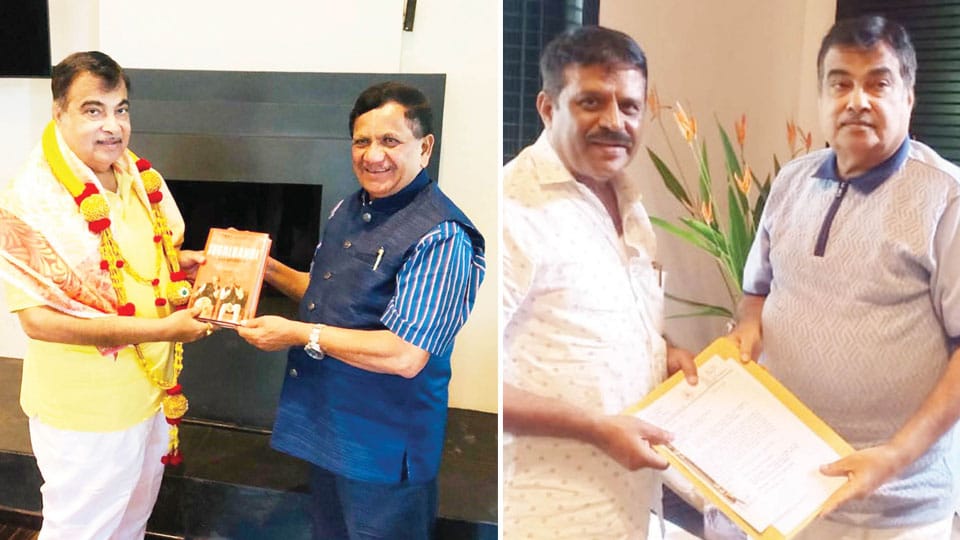 Madikeri: Madikeri MLA M.P. Appachu Ranjan and Virajpet MLA K.G. Bopaiah took turns to meet Union Minister for Road Transport and Highways Nitin Gadkari who was camping in Kodagu last week and placed a slew of demands to improve the district’s infrastructure and also for attempts to save the famed Coorg Oranges from extinction.

After staying in Kodagu since last Thursday, the Minister and his family members left for Nagpur yesterday on a chartered plane from Mysuru. He reached Mysuru from Madikeri by road.

Appachu Ranjan apprised the Minister of the need to upgrade the existing Channarayapatana-Makkuta Road into a National Highway for the overall economic growth of Kodagu. Upgrading the road will be beneficial for Kodagu as well as Hassan, the Minister was told.

The MLA told the Minister that Kodagu attracts thousands of tourists every year but the fullest potential has not been realised due to connectivity issues. While the connectivity from the Mysuru side will improve with the construction of the proposed Highway between Paschimavahini and Kushalnagar, parallel to the existing National Highway-275, the connectivity from Hassan has to improve, the MLA explained.

Appachu Ranjan said that the Channarayapatana-Makkuta Road passes through Holenarsipur, Arkalgud, Shanivarsanthe, Somwarpet, Madapur, Madikeri, Murnad, Virajpet and Makkuta and ends at Karnataka-Kerala border and if the road is upgraded, it will boost travel to Kodagu from Hassan as well as Kerala from the Kannur International Airport, the MLA told the Minister.

A Detailed Project Report (DPR) and the alignment plan for Channarayapatana-Makkuta Road upgadation was submitted to the Ministry of Road Transport and Highways way back in 2018 but the project has not received approval, the MLA pointed out. Lack of good road connectivity has been a bane for Kodagu and hampers the economic prosperity of this region, the MLA said.

Giving a patient ear to the MLA, the Minister asked him to submit the details of the project and the cost estimate. He assured the MLA that he would look into the proposal. The MLA also requested the Minister to sanction a cable car to one of the tourist destinations in Kodagu.

Even MLA K.G. Bopaiah met the Minister and urged him to upgrade roads into highways within the district for better connectivity and travel experience. The Minister promised the MLA that he would look into the proposals for road upgradation if they come from the State Government.

During his conversation with Bopaiah, Gadkari expressed concern over the drop in the yield of the once famed Coorg Oranges. He asked the MLA to take steps in this regard and to create an environment to rejuvenate the fruit based on the model developed in Nagpur.

He assured the MLA of cooperation in this regard.

Even Nagpur is famous for oranges. Many orange clusters have come up in Nagpur on the lines of industrial clusters to boost domestic consumption and exports. Gadkari also told the MLA to take steps to improve the orange variety.