Home » Feature Articles » Mahatma follower at the helm of Mahajana 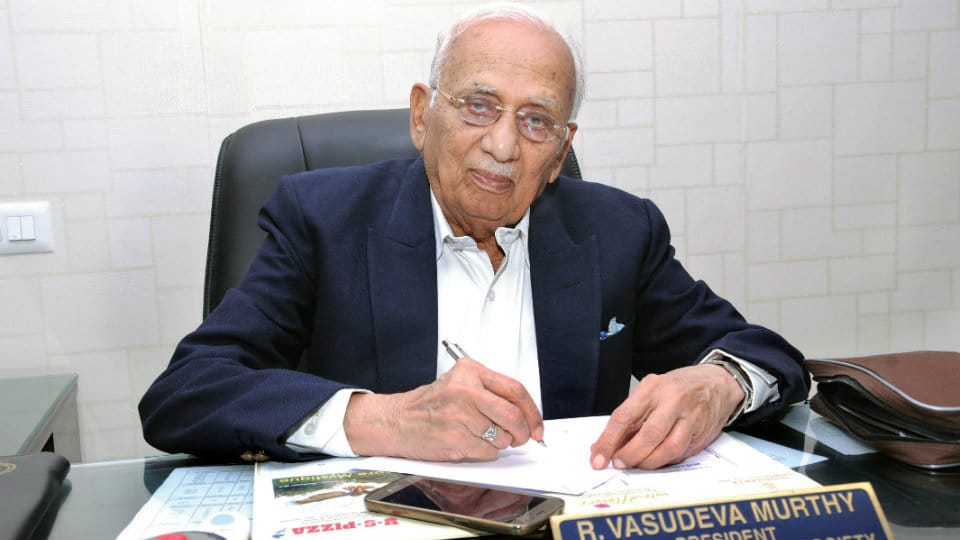 Mahatma follower at the helm of Mahajana

The span of life one enjoys is definitely not in one’s hand as many leave this world for various reasons much before the ripe age on earth. However, there are a few who live a full, fruitful, meaningful life, ageing gracefully by taking everything that comes in their stride.

One such soul amidst us today is the gentle- nonagenarian-educationist R. Vasudeva Murthy, the President of  Mahajana Education Society (MES). Born with a silver spoon, he has seen everything in his life and is a Stithaprajna (stable state of existence) in every sense.

Star of Mysore Features Editor N. Niranjan Nikam met Vasudeva Murthy at his daughter Vijayalakshmi’s apartment in Jayalakshmipuram, where he opened up to talk freely about his parents, early years, the industries he ran, the theatre he runs, his baptism into education field and his views about life. Excerpts… —Editor

Star of Mysore (SOM): How do you personally look at the ninety years and still going strong life of yours?

Vasudeva Murthy: Whatever little I have attained, I don’t say I have done much but the little things that I have done in these 90 years, I feel quite happy. I am also happy as far as my business and social contacts are concerned. After joining Mahajana Education Society (MES), whatever little I could do I have done for the progress of this institution which I feel good and also proud about.

SOM: Share with us something about your parents Rattehalli Ramappa and Bhagyalakshamma. How much they influenced you?

Vasudeva Murthy: My father was a principled man and that left a lasting impression on me. Actually we come from Sagar in Shivamogga District, very near to Jog, where my father and grandfather had business. He came to Mysore 70 years back. My father was doing arecanut business and then changed to dealing in rice mills. He was a very influential man because he became the Vice-President of the Municipality there. He was so influential that when the Deputy Commissioner came to Sagar, he would visit our house first. My father constructed a High School called Municipal High School and donated Rs.25,000 in those days. He was the Secretary of the School for decades.

SOM: Why did he come to Mysore?

Vasudeva Murthy: Because of my mother Bhagyalakshamma, who got operated in Bangalore and they advised her rest. He thought Mysore is a better place for rest. He came here and took a bungalow on rent which belonged to B.C. Lingaiah (former Municipal President). Since he was already in rice mill business, he bought one more rice mill here. He somehow got in contact with G.R. Ramaiah, who was owning Navajyothi Studios. He (Ramaiah) thought of having a theatre and my father became partner with Ramaiah and built Prabha Talkies in 1948. Ramaiah was in debts and my father wanted to get out of partnership. Therefore, he took Prabha Talkies with lot of debts and left Navajyothi Studios to Ramaiah. Somehow we managed to clear the debts. We were the first to manufacture avalakki (beaten rice) by machines. Previously we used to pound it. Somehow my father got an idea to manufacture through machines and we installed about eight to ten machines and we were manufacturing 200 bags of avalakki daily. The market was Mangalore because in South Canara they eat avalakki every day. Through that business we could clear the debt of Prabha Talkies.

After finishing my degree in Bangalore, I wanted to study further but my father didn’t allow. He asked me to look after the theatre because I had done my B.Com. I was writing accounts in the theatre and since my father had bought rice mill I started looking after it also. I thought I must do something and therefore thought of installing a plant for extracting oil from rice bran, a first-of-its-kind in Karnataka.

SOM: What about your association with Ambale Subramanya Iyer whose bust was also installed recently in Mahajana College?

SOM: How did your father come in contact with Iyer?

Vasudeva Murthy: In those days in a city like Mysore everyone knew everyone. My father was the President of Rice Mill Owners Association and he had contacts and that is how he got into MES and became the President of the Society. During his time, he started PU College where we have installed his bust and the First Grade College he started, which was inaugurated by Swami Chinmayananda.

SOM: Can you recall about your time in Sagar as a child?

Vasudeva Murthy: I had the real good fortune of shaking hands with Mahatma Gandhi when he came to Jog Falls. My father was the Chairman of Reception Committee. I was still a young boy of around ten. He took me with him to meet Gandhiji. They had a reception for him when I was in the primary school. It is still green in my memory.

Later, I became a Congressman. Till independence I was purely wearing khadi, nothing else, even my bed and blanket was khadi. I used to attend Congress meetings and do Prabhatpheri till I was in High School. I was even jailed for two days during freedom movement. I went to attend the AICC meeting in Bombay during Quit India Movement. Immediately after independence I quit Congress at the age of 20. Then I never ventured into politics. At that time I was caught in the euphoria of freedom movement. I was shouting slogans and they arrested me. Because my father was very influential, the authorities did not keep me for long, they released me after two days.

When Gandhiji was assassinated on Jan. 30, 1948, which is called the Sarvodaya Day, from that day, I used to fast as Gandhiji had said when there was food shortage give up eating one night’s dinner. But I took up fasting on Jan.30 the whole day. I was only on water; I did it for 30 years. I was the Treasurer of All India Students Congress when Ramakrishna Bajaj (Bajaj Auto), son of Jamanlal Bajaj, was the Vice-President and Ravindra Varma, a Keralite, was the President. They used to come and stay at our house in Mysore. We held a conference in Bangalore at Glass House, where J.B. Kripalani was the chief guest and the likes of Ashok Mehta, Achyut Patwardhan had all attended.  I was the President of Federation of Karnataka Chambers of Commerce and Industry — second non-Bengalurean to become the President, first was B.N. Aradhya of Ragotine, again from Mysore and the third again is a Mysurean, Sudhakar S. Shetty.

SOM: It is almost 70 years that you graduated from the University of Mysore. You are an educationist. Tell us something about it.

Vasudeva Murthy: My intention was to build up these institutions. Therefore, we started First Grade College, Law College, Post Graduate Centre and CBSE School. All these institutions were added during my time. Today, it is one of the best institutions in the city and there are more than 6,000 students. Our intention is to make this a Deemed University (for which we have already got autonomy) in another four to five years. In our management we have both academicians, industrialists and auditors. In fact, Ha. Ma. Nayak was one of our Committee Members. Former CM S.M. Krishna, former Minister B. Rachaiah, Isha Foundation’s Sadhguru Jaggi Vasudev are some of our illustrious alumni.

SOM: You still run the Prabha Picture House. You had set up Rice Bran Oil Extraction Plant, the second in the country. Is this unit still running?

Vasudeva Murthy: The unit is not running because I left the business and handed it over to my nephew but he did not continue. When I started rice bran oil plant, it started mushrooming everywhere and business became very competitive. Therefore, I thought of another method. I got the formula from CFTRI where I could extract oil from silk worm. All these years, silk worm was thought of as a dead worm and were burying it. Then what we did was after taking out the silk we dried the silk worm and then extracted oil from that worm because it used to contain more than 75 per cent of oil and the extracted worm used to contain more than 80 per cent of proteins. This process was being done in Japan only. This oil was used for manufacturing washing soap and the extracted material was used for manufacturing animal feed.

SOM: Among your many strengths like the enthusiasm you have, generosity you show, good rapport with society, the most important strength is the ‘Positive Thinking’ you have. Having seen many ups and downs all these years, especially losing loved ones before you, have you been able to face these adversities because of this particular attitude?

Vasudeva Murthy: What I feel is you have to face things as they come. But if we keep thinking about them, it is not correct; it is not positive thinking. You have to face all kinds of situations in life but you have to take it in the right spirit; whether it is adversities or good things in life. That should not be the attitude of anybody. For instance our association with Chinmaya Mission and Ramakrishna Ashrama has helped us develop that kind of an attitude.

SOM: Because you lost your son, your grand-daughter and a few others…

Vasudeva Murthy: True, but we have taken it in the right  spirit. We do not brood about it.

Vasudeva Murthy: I am not keen on living for 100 years. Whatever I could do I have done up to my capacity but not that I have done anything great. I am quite happy with whatever I have achieved; I am not ambitious or avaricious. I will takelife as it comes.