Home » Columns » Of Doctors & Patients – Effects and Side Effects ! 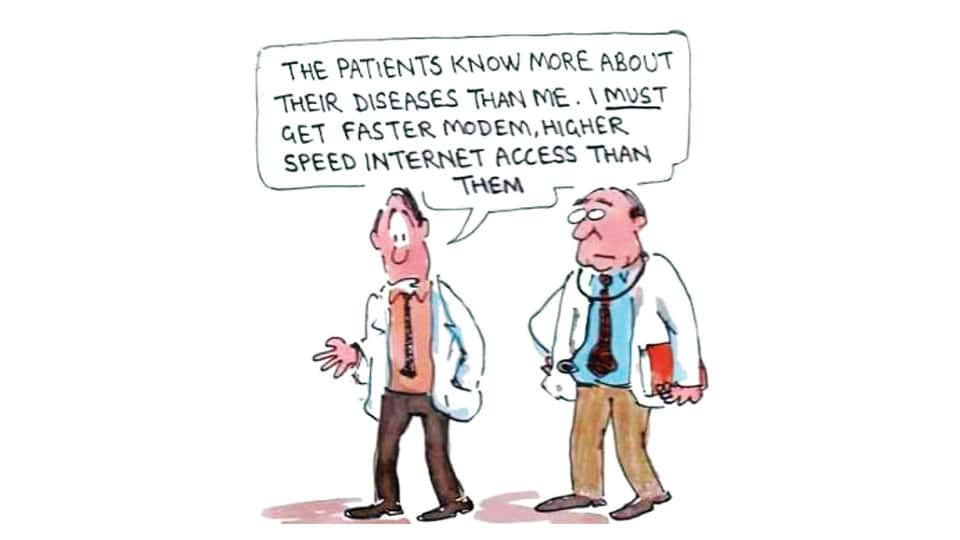 Of Doctors & Patients – Effects and Side Effects !

These are days when one of the greatest relationships that once existed between doctors and patients has become one of the greatest divides. Contrary to what most folks think, this is not just in our country but across the entire world. The reasons for this sad state of affairs are many and they vary from country to country depending on how the medical treatment system works there. Much has been spoken and written about how patients view their doctors as exploiters who advise them to go through unnecessary tests and investigations which are very expensive too. So I will not harp on this issue here.

What I would like to highlight here is the apprehension that a great many patients build up these days when it comes to taking simple drugs which they have been using over many decades without inflicting any harm upon themselves. Because of the internet which has now actually become an extension of the body, thanks to the ubiquitous smart phone, most people who accompany patients to doctors’ chambers begin looking up details of the drugs even as the doctors start writing the prescriptions.

Unfortunately, this seems to be particularly true in my case as I have the habit of writing all my prescriptions slowly in very clear capital letters ! So anyone who decides to know more about the drugs that I prescribe actually types at a faster speed than my writing, pausing to let me to finish. Very often the auto-complete feature in the phone takes over and spares him or her this agony. By the time I decide on the dosage and the frequency of the drug the smart person would have decided whether the drug is worthy of being taken or not !

Before leaving my consulting room they ask me whether all those drugs in my prescription are really necessary and safe too because kind-hearted Google tells them that they are capable of causing much harm by way of side effects. Earlier, when this situation was still more of an exception than a rule I used to take pains to reassure them by explaining that most of those side effects are extremely rare and easily manageable. Then when this problem became more common, I had to come up with a new solution. I now ask them to first look up the side effects of some of the very common ‘over the counter’ medications which they take for their colds, coughs and fevers. That is when they look up at me with panic and say that they never knew that they were exposing themselves to so much danger. I have therefore found this strategy very useful in my practice. You’ll see why.

The most commonly used drug, Paracetamol or Acetaminophen that is present in almost every formulation taken by most people for their aches, pains, fevers and colds can be a killer too. I say this because the internet says so ! At its mildest, it can cause severe itching, rashes, disfiguring dark patches all over the body, mouth ulcers and very painful and ugly blisters that refuse to go away even with years of very expensive treatment. At its worst, it can cause your skin to peel off and all your fingertips to rot and your nails to fall off. It can also cause bloody stools and urine, severe jaundice and a very painful death due to liver failure.

Now, how is that for a fearful picture of what hell can be? But all this does not have to happen and it does not happen to the millions of paracetamol users across the world. It is only a theoretical possibility. But it is the duty of the internet to give you all the information related to your query. It is up to you to weigh the risks and to sift the grain from the chaff and decide whether to take the drug with the attendant risks or suffer the pain and discomfort of not taking it.

Let me make one thing very loud and clear. The human mind may be capable of doing amazing things. But it also suffers from a very amazing weakness. Once you put a tiny element of doubt into it you can cripple it miserably. That is why people ruin their lives when they begin to suspect the sincerity and honesty of their friends or even the fidelity of their spouses instead of trusting them. That is why people suffer so much when they are unsure of what can happen to them. And, that is also why even the most incapable astrologers are so much in demand even by some of the most educated people !

Your internet information about the drug prescribed to you can nag you like nothing else can. I have seen it driving people nuts by making them lose sleep over the dilemma of whether to take a drug or not. And, even when they do take it, they invariably begin to imagine that they are experiencing all the side effects mentioned by the internet !

But the funniest and perhaps the stupidest thing is that even people who are apprehensive of taking drugs prescribed by fully qualified doctors do not mind eating what can literally be called rubbish on the roadside. They eat fiery, spice-laden chats and street foods and quench the fire in their bellies with water teeming with all kinds of bacteria and viruses. They do not give a second thought to what additives go into their food as long as these give an irresistible taste to it. They smoke and drink without the least restraint and without daring to ask dear Google what these two partners in crime can do to their minds and bodies. They sniff in lethal snuff and also munch on mouthfuls of tobacco, fully aware that they are only inviting a painful death.

READ ALSO  Elections: The Grouse of the Disappointed Urban Elite

They happily gorge themselves on food served at lavish wedding feasts without checking if it has been prepared hygienically or not. Actually, it is at such feasts where hygiene is compromised most. A simple peep behind the curtains will show you what I mean. Even the most educated and enlightened people will not only gobble up large quantities of processed foods themselves every passing day but also let their children grow up on chemical-laden foods that they should not even be touching in their childhood. This is the bane of leading life on the fast lane where cooking themselves proper meals is near impossible amid their busy schedules.

People smear themselves with layers upon layers of sweet smelling cosmetics and dye their hair with hues that can put a rainbow to shame without bothering to know if they can cause cancers which they actually can. When people go to their doctors with aches and pains most of them are not happy with the reassurance that they are just nuisances and are best left untreated. They expect this reassurance to at least be supported by an accurate diagnosis. So many people, just because they do not mind spending money, insist on getting CT scans done for the most trivial problems. When it comes to scans the CT scan is a hot favourite unlike the MRI which is considerably more expensive and cumbersome although relatively less harmful.

The humble ultrasound scan, the most harmless and yet the most useful of all scans, is something that they relegate to the dustbin because it has been around for too long now and is now found at every street corner. Besides, because it costs just around five hundred rupees or even less they think it is infra dig to go through one ! They think that a CT scan is a magic eye that sees through their bodies and shows up every single malformation and malfunction. It is actually not so. Almost none of them know that in that unnecessary CT scan lurks a great deal of danger because one CT scan exposes their bodies to a dose of radiation equivalent to the radiation from several hundred x-rays.

So, what is the solution to this problem now? Let me tell you that the best approach is to trust your doctor and follow his or her advice as something given in good faith. It may have its inherent dangers no doubt but they are very minimal. They are certainly not as dangerous as the hidden dangers lurking all around you from which there is just no escape !

11 COMMENTS ON THIS POST To “Of Doctors & Patients – Effects and Side Effects !”