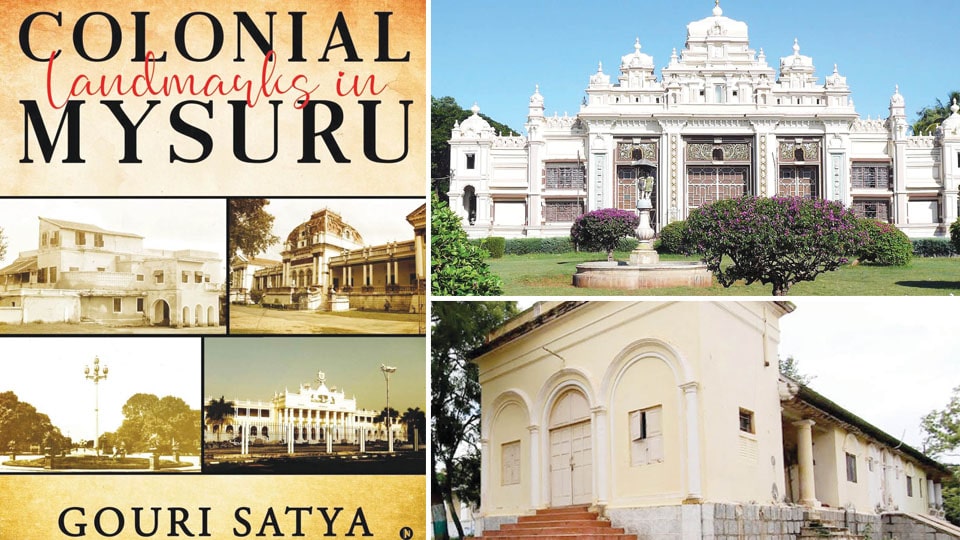 Another delightful treat on Namma Mysuru!

Gouri Satya, perhaps the best-known historian of our city, from our own times, has come up with a very generous second helping of the history of our royal city with the release of his most recent book ‘Colonial Landmarks in Mysuru’, published by Notionpress. This handsome handbook lists almost all the edifices like gardens, gateways, buildings and bridges in and around Mysuru that came up during the colonial times.

As we all know very well, that was the time period, like many other milestones in the history of our country, that has left a very noticeable and imposing imprint across its length and breadth of an era that has gone by. Four years ago, in the year 2016, Gouri Satya had released his first book about the history and heritage of our city about which I had written in this column. That was the day the memorial to Maharaja Jayachamaraja Wadiyar was inaugurated at the place where the Hardinge Circle Fountain once stood. This second book takes off from where the first one ended which almost makes it a sequel to it.

The book throws light not only on the landmarks it deals with but also on the personalities who built them or lent their names to them. It also turns its spotlight on the changes that were made to these edifices as the years rolled by and the subsequent name changing that was done to many of them.

For instance, not many of us know that the sprawling Bannimantap Grounds, which needs no introduction to us, as it is the venue of the annual Dasara Torch Light Parade, was once called the Cole’s Garden.  This was in memory of Arthur Henry Cole (1780-1844) who was the resident of Mysore during the reign of Maharaja Krishnaraja Wadiyar III.

Not many us know that this British officer along with Lt. Col. Gibbs was responsible for suppressing a raging rebellion by British troops against their own authorities. This rebellion had all the signs of spreading across the country and for some time it threatened the very existence of the British rule in India till it was successfully quelled. It had many epicentres, notably in, Masulipatnam, Hyderabad, Chitradurga and Srirangapatna and locally it was perceived as a war that had been declared against the British empire by Maharaja Krishnaraja Wadiyar himself! That was when Dewan Poornaiah, the ubiquitous trouble-shooter of the times, stepped in and clarified that it was not so, by writing a detailed letter to Josiah Webbe, a very powerful member of the Madras Council, clarifying the continuing allegiance of the Maharaja of Mysore and his subjects to the Crown.

To further placate a perhaps still doubting Webb, and also to express his personal gratitude to him for granting him the rights to a part of the revenues of the State, Poornaiah at his own cost of about rupees one and a half lakhs, got a massive granite monument seventy feet high, erected to commemorate Webbe’s greatness at the site of the final battle in which the rebels were defeated. This imposing monument, known a Rana Khamba to the local villagers but almost unknown to most other people, stands a stone’s throw away from the very well-known Ahalya Devi Maramma Temple at Arathi Ukkada, off the Pandavapura-Chinkurali Highway. Incidentally, I visited the place early this morning with a group of my friends and fellow members of the Anjuman-E-Hadiqatul Adab, just to show them something interesting which they had never seen in their lives, being so close to it!

Arthur Cole was also the man who first built the mansion atop our Chamundi Hill which served as his private summer residence till it was much enlarged in the year 1920 by the Maharaja. Then after a third expansion in the year 1938, it was christened as the Rajendra Vilas Palace and became what it now is. Gouri Satya’s book makes very interesting reading because it not only tells us about the colonial landmarks in our city but also because it traces the connections of their builders with many other similar edifices across the country.

In retrospective references it also tells us about the original buildings elsewhere in the British empire, upon the design of which our own heritage structures were modelled. For example, the design of the Aloka Palace or Writers’ Home located in Yelwal was derived from the ‘Kutra House’ in Ireland. Cole’s successor Casa Major occupied it up to 1840 after which it became one of the many hunting lodges of our Maharajas.

Another colonial landmark we all see every day in the heart of our city and yet know nothing about is the imposing bronze statue of James Gordon that stands in the lawns of our Attara Kacheri or old Deputy Commissioner’s Office. I call it the ‘old’ DC’s Office though our DC still presides over                 the post from there because a brand new one stands on the T. Narasipur Road waiting for the Deputy Commissioner to step in!

James Gordon was once the Commissioner of Mysore whose office functioned from this very imposing building and the lawns around it are therefore still called the Gordon Park. Gordon, before becoming the Commissioner was the guardian to the young Maharaja Chamarajendra Wadiyar and he took care of his education and guided him in administration. He was also present at the marriage of the Maharaja with Vanivilasa Sannidhana Kempananjammani on 26th, May, 1878 at the Jagan Mohan Palace and he on behalf of the Viceroy, Lord Lytton presented a diamond necklace for the bridegroom and a pearl necklace and a gold waist belt, studded with precious stones for the bride. Gordon was also responsible for laying the Railway line between Mysore and Bangalore while he was the Commissioner. The 88-mile-long Railway line which had been shelved for want of funds in the year 1871 was taken up as a part of the famine relief work to provide sustenance to poor workers during the crushing famine the State saw between the years 1876-78.

The history of our Dufferin Clock Tower, more popularly known by most Mysureans simply as the ‘Chikka Gadiyara’ is no less interesting and it has been recorded in good detail in the book. It also narrates the history of the ‘migrating’ Elgin Fountain and the Lansdowne Building. This most notable landmark in the centre of our city, now sadly stands as its most shameful eyesore — a once graceful lady, now ashamed of her nakedness! A mute testimony to our insensitivity to the need for preserving the dignity of our heritage.

But mind you, Gouri Satya’s very informative book work is not a coffee table book full of pictures which you can glance through in a few minutes. It is a very rich source of information for serious history buffs who like to turn the pages of history with some seriousness but the way it has been compiled certainly ensures that it makes the exercise most interesting!

Dr. K. Javeed Nayeem Gouri Satya Over a cup of evening tea
Musings on Raja Ravi Varma A Great Painter
These students grow what they eat

5 COMMENTS ON THIS POST To “Another delightful treat on Namma Mysuru!”