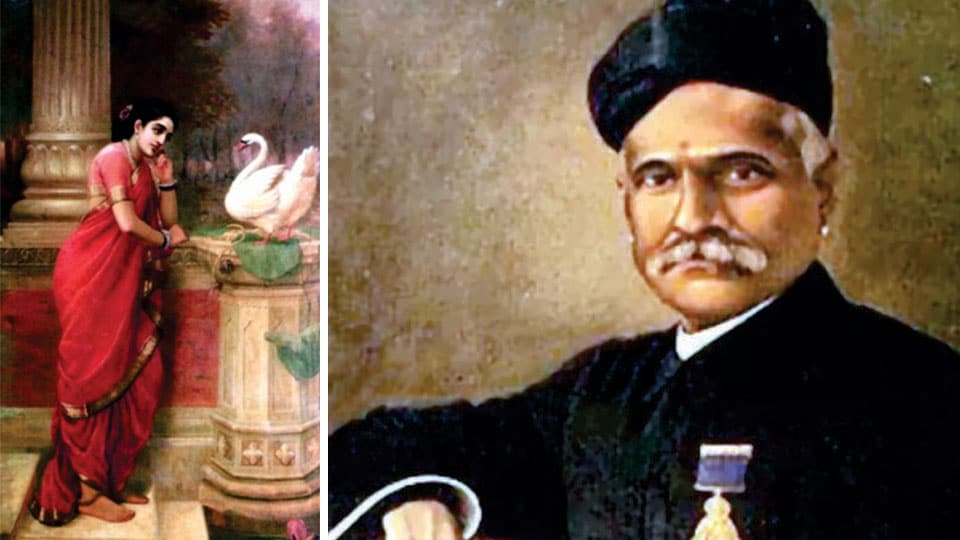 India has the good fortune of having multi-coloured paintings of known as well as unknown painters. Actually painting started during the pre-historic period as evidenced at Chitradurga, Hirebenakur, Mirzapur and other places. Later Ajanta and Ellora paintings were discovered. In Simhala, Sigiriya became famous for multi-coloured paintings. In fact in many places, later, paintings have been done over the faded surfaces of the earlier paintings. In medieval period, Rajasthani and Mughal paintings became important. Kangra paintings showing Lord Sri Krishna in various attractive poses have become important. All these show that there was a tradition of painting in different parts of our country.

Under this background, the contributions of Raja Ravi Varma in painting may be considered. Raja Ravi Varma belonged to the royal family which ruled over Thilimanoor. This place is twenty five miles from Thiruvananthapuram (Trivandrum).

Ravi Varma was born on 29.4.1848. His father was Kandaru Desath and mother was Uma Ambabai. Ambabai was a great poetess while his father was a great Sanskrit scholar. Ravi Varma imbibed the good qualities as well as culture of his parents. From childhood itself, Ravi Varma was a great devotee besides cultivating self-dependence and compassion towards others. After finishing the morning duties including bath, he used to recite Saundarya Lahari, written by Adi Shankaracharya, the first propagator of the path of knowledge (jnana). In addition, he was also reciting the songs of motherland.

Ravi Varma also studied Sanskrit and Malayalam literature, grammar, Vedas, Puranas, Ramayana and Mahabharata. He was reciting the famous Amarakosha. When he was five years old, a turning point in the life of Ravi Varma took place. And his father-in-law introduced Ravi Varma to king of Thiruvananthapuram, Ayilyam Thirunal. At that time, Ravi Varma was just fourteen years old. He was given a book of painting done by the famous painters of that time, and Ravi Varma was asked to study them. Then he was asked to continue the painting classes under the famous teacher Alagiri Naidu.

In 1896, Ravi Varma was honoured with the title Veerashrinkhale. Ravi Varma was appointed as the Palace artist. In those days, he was paid Rs. 50 as his monthly salary.

In 1868, a European painter, by name Theodre Jenson had come to Kerala. He showed his European paintings and explained the abstract ideas behind them to Ravi Varma. He further explained that any painter should be careful in painting women because of their dignified attitude, modesty, a mild smile, walking with dignity and courage. Ravi Varma learnt all these good qualities by looking into the European paintings. A large room with all facilities was provided in the Palace itself so that they would not go outside for seeing the paintings.

Ravi Varma was greatly influenced by paintings of the great senior artists like Ramaswamy Naicker and Armugam Pillai.

The influence of these great painters on Ravi Varma can easily be seen in his works. He was a self-made painter though influence can be noticed in his own paintings. He increased his knowledge by repeatedly reading the various Puranas.

In the meantime, Ravi Varma’s marriage took place. His wife belonged to the royal family of Purur. Her name was queen Bhagirathibayi. She belonged to the royal family of Maverikkara. This couple had two sons and nine daughters. In 1886 was born the first son Kerala Varma. The second son Rama Varma was born in 1879. Umabayi became a model for Ravi Varma’s paintings. Rama Varma studied painting in JJ School of Arts at Mumbai.

In 1870, Ravi Varma went to Kelluru and under the Goddess Mookambika performed various rituals. He was always thinking of this Goddess and hence, in his dream, Mookambikadevi touched his head with benediction (ashirvada). From that day onwards Mookambikadevi became the model for all his paintings.

He visited many temples in North India and observed the ornaments and other details. In addition, Ravi Varma studied the chapter called Chitrakala which is a part of the famous Vishnudharmottara Purana. Though the details were good and accurate, they did not appeal to the common people. Hence, he painted Indian deities in the common persons’ attire and ornaments. At last, common people began to like the paintings of Ravi Varma in which various persons who looked like themselves and felt happy and hailed Ravi Varma as a comman man’s painter. And hence, he became popular.

He painted the beauty of Himalayan mountains and also the beauty of important hill stations, along with their natural beauty. Taking all these contributions, the British Government gave him the title Kaiser-e-Hind in 1904. Invitations came to Ravi Varma from Mysore, Baroda, Indore, Gwalior, Pudukkottai, Jaipur and Udayapura to prepare paintings of the scenery and natural beauty of these places.

In the meantime, an Englishman had prepared the English translation of the drama ‘Shakuntalam’ and he requested Ravi Varma to give a painting to suit the context. Ravi Varma did this and the book ‘Shakuntala’ and Ravi Varma both became famous all over the world.

In 1876 exhibition in Paris, his painting, a Malayali beauty, received a gold medal. In the same year in the exhibition arranged at Vienna, he got a gold medal. Ravi Varma had used seere as suitable dress for beautiful women. Thus, seere also became popular.

But due to the stress of painting and travelling, he died when he was just 58 years on 2.10.1906. Many condolence messages came from within India and abroad where his paintings were known. Many people considered Ravi Varma’s as the golden era of painting. How true !