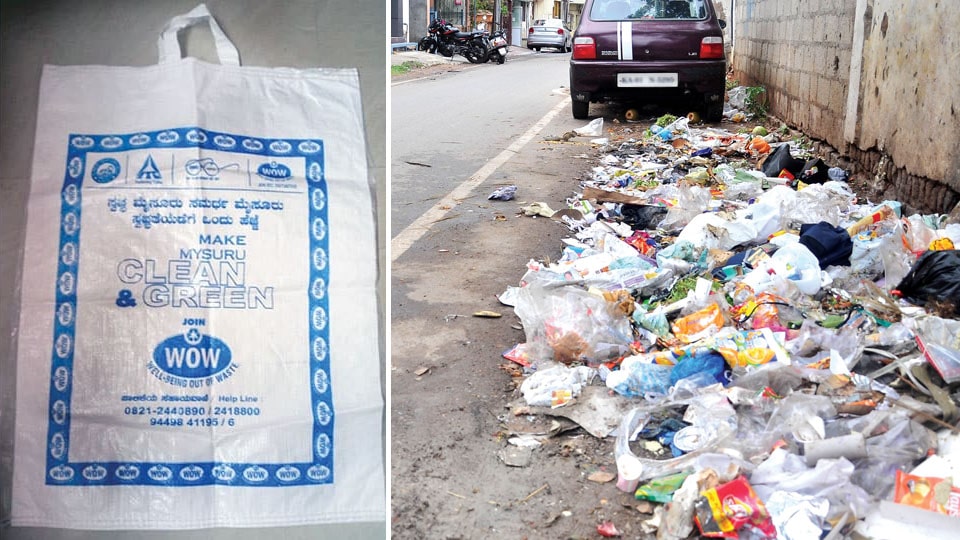 Mysuru City Corporation (MCC) is making all efforts for Mysuru to regain the cleanest city tag and in this direction the civic body has tied up with Kolkata-based multinational company, ITC Limited, to sell plastic waste accumulated in city. Called ‘WoW’ (Well-being out of Waste), the project aims to segregate garbage at the point of generation and pack it into different coloured bags for recycling.

Every day nearly 400 to 450 tonnes of waste is collected in the city out of which about 120 to 130 tonnes is plastic waste. The collection and disposal of plastic waste was posing a major problem to the MCC. In the light of this, a ban on usage of plastic was imposed. However, plastic use continues stealthily.

Plastic is used to wrap almost all the things packed apart from food items and the MCC is finding it difficult to clear plastic waste scientifically. To fight this problem, MCC had even distributed two types of dustbins to every house to segregate dry and wet waste. But in spite of best efforts, people continue to put both dry and wet waste in one cover which has resulted in a huge problem of segregation at source.

Since several years, plastic-mixed garbage is being dumped at the Sewage Farm in Vidyaranyapuram. The stench that emanates from the waste is posing a huge health hazard to the residents of those areas. As the plastic waste does not disintegrate, it has now grown to mountainous proportions over the years. The MCC has come forward to cap it by digging huge pits.

This will reduce the burden on MCC as nearly 130 tonnes of plastic out of the 450 tonnes that the city produces will be lessened. Out of the remaining garbage, nearly 250 tonnes of wet waste will be reduced as there are plans to set up wet waste composting units. These steps will hopefully solve the garbage problem.

MCC is coming up with new ideas to find permanent solutions for the garbage mess. As one more step in this direction, MCC has entered into a contract with ITC which will distribute bags that can carry 20 kg of plastic waste under its CSR (Corporate Social Responsibility) initiative to nearly two lakh houses. Already the MCC has given its approval for the same. By the end of this month, the bags will be distributed to all the households and instructions will be given to compulsorily collect plastic waste.

Fines to be levied if waste is not segregated

Speaking to Star of Mysore, MCC Health Officer D.G. Nagaraju said that though there is clear instruction to segregate wet and dry waste at source most of the residents are not following the order. In this background, a rule will be incorporated in the MCC by-law to compulsorily segregate waste and if it is not followed, fines will be imposed, he said.  Mapping has already been done regarding waste generation and nearly 130 tonnes of plastic waste is being generated. ITC will even buy used plastic covers that contain eatables like biscuits, snacks and chips which were earlier being rejected, he added.