Home » Columns » Abracadabra By K. B. Ganapathy » Makers of India after Independence 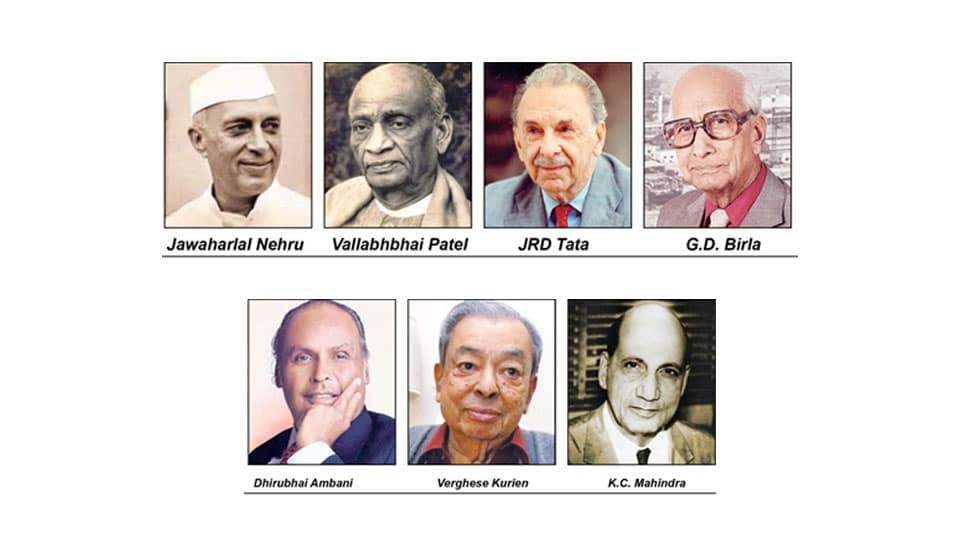 Makers of India after Independence

Dr. B.R. Ambedkar, Architect of the Indian Constitution, said in his speech on January 26, 1950:

“If hereafter things go wrong, we will have nobody to blame except ourselves. Not to lay their liberties at the feet of even a great man or to trust him with powers which enable him to subvert their institutions. Bhakti in religion may be a road to the salvation of the soul, but in politics Bhakti or hero-worship is a sure road to degradation and to even dictatorship.”

The Week magazine of 40 years, three years junior to Star of Mysore, in its anniversary special issue dated Dec. 26, 2021, has written about the makers of modern India. This is how the magazine was saluting the visionaries in the 75th year of independence. A good nationalist thought.

Naturally on the cover are the images of the titans of some of those makers, may I say architects? Yes. They are JRD Tata, G.D. Birla, Vikram Sarabhai, Dhirubhai Ambani and Verghese Kurien (the milkman of the nation!). But, surprisingly, no politician. Inside there are special articles led by Rajmohan Gandhi on the subject. But there are others too among the makers of modern India.

So it is clear on Aug. 15, 1947 we inherited a Medieval India, a Feudal India and certainly not an Ancient India, Vedic India. The leaders, therefore, had a huge responsibility to take this country, which got independence at the stroke of midnight, to the modern world of light and even enlightenment.

Who were those leaders? Are they merely the rulers, who would sit in the Parliament and make laws for seeking power over the people as masters? If it is so, then we have merely got new native masters (rulers) in the place of the old British masters (rulers).

Therefore, it is clear that among the makers of modern India there are visionary political leaders as also visionary leaders from business, industry, science and technology and more importantly agriculture. There was an urgent need to modernise our education, health service and even defence forces. Personally, being a child of pre-independence days, I get the feeling that India was lucky, despite the doomsday prophets, to have got many makers of modern India.

History is replete with instances where a democracy is easily destabilised and even destroyed in its early nascent days due to the overweening ambitions of the very people (or leaders) who fought for freedom and democracy. In such a dismal world scenario it is a miracle that our country, so vast with over 600 Princely States who were under British suzerainty, with such diversity in race, religion, culture and language was held together in an orderly manner and administered. There might have been many flaws but the political leadership of giants like Pandit Jawaharlal Nehru and Sardar Vallabhbhai Patel made Indian democracy survive, survive because Nehru and his men in other areas of economic activity decided to modernise India. Luckily for India two titanic industrial houses were already in existence — Tatas and Birlas. Soon others joined in, with government’s industrial policy, in keeping with the clarion call given by Sir M. Visvesvaraya, ‘Industrialise or perish’. Nehru was a good listener and proposals from the learned and experts were always looked at from the country’s perspective. No wonder Nehru, a philosopher-statesman, called the heavy industries he planned to build as the ‘temples of modern India.’

Those were desperate years for India, an India without roads and many essential infrastructure. Why, we did not have enough food to eat and were at the mercy of America and other advanced countries. With foreign aid, Nehru as Prime Minister got us Bhakra Nangal Dam, four more steel industries  — Rourkela Steel Plant, Bhilai Steel Plant, Durgapur Steel Plant and Bokaro Steel Plant — in addition to Tatas at Jamshedpur. CSIR, IITs, Atomic Energy Commission, HAL, HMT, Indian Telephone Industries and many more, mostly from borrowed money and aid, were established. That was Nehru’s vision for modern India.

The Council of Scientific and Industrial Research (CSIR) was set up in 1942 but was promoted and taken to higher level, specially for Research and Development (R&D) in diverse Science and Technology areas. It was the pet organisation of Nehru, we were told. Over the years it has grown in size with 38 National Research Laboratories including one in Mysuru, the CFTRI.

Among the entrepreneurs and technical experts, there were many who became leaders in their own field of enterprise to build our nation. Among them are Vikram Sarabhai who headed ISRO taking it to great heights, Ardeshir Godrej, N.R. Narayana Murthy of Infosys, Adar Poonawalla, the vaccine king and many recent ones connected with e-commerce and IT etc., etc., including publishing of books and movies, sports…. you name it, it is identified in this issue of The Week magazine.

And finally, there is one article titled rather creatively “Driven by Heart” by Anand Mahindra, Chairman of Mahindra Group, original Jeepwallah, now a leader in the automobile industry. No doubt, the founders of Mahindra Group are at the forefront of nation-building.

I mention this here to share with my readers an interesting episode in the history of Mahindra & Mahindra company.

It was established in 1945 before independence when it was one United British India as Muhammad & Mahindra Limited. It was founded as a steel trading company in Ludhiana by brothers K.C. Mahindra, an engineer and J.C. Mahindra along with Malik Ghulam Muhammad, an economist.

After India gained independence and Pakistan was formed,  Muhammad emigrated to Pakistan. There he served as Governor-General of Pakistan.

Thus it was in 1948 the company changed its name to Mahindra & Mahindra, after the name of two brothers. This company started assembling vehicles under licence of the Willys Jeep in India. For many decades it was a monopoly jeep manufacturing company.

Now it is a leader in auto industry like TATA and Maruti Suzuki contributing to make India a modern industrial country.

Last word: But the question is, what it takes to be a leader? Some say concern, confidence and courage. Watch out for next Abracadabra.