Home » Columns » Abracadabra By K. B. Ganapathy » Birth of a Royal Foundation…: What is ethical behaviour? 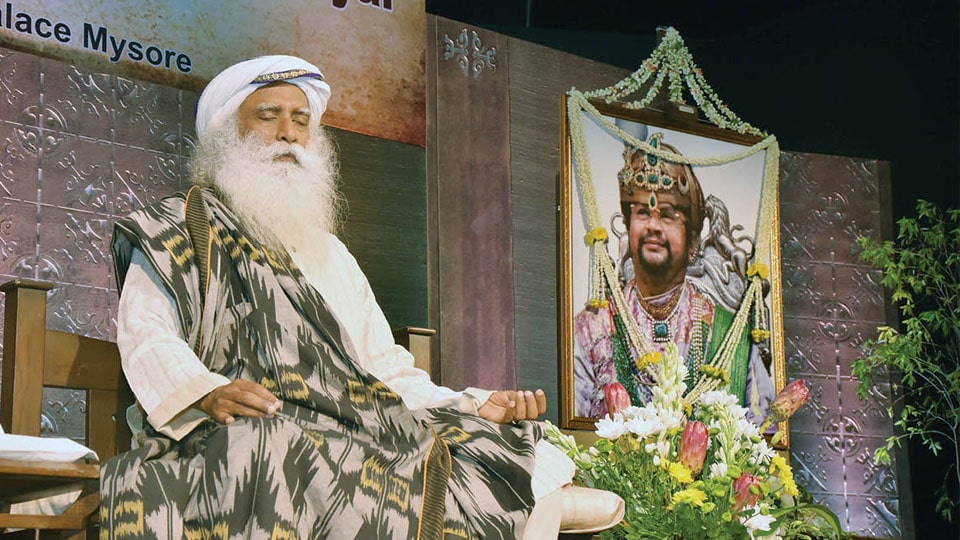 Birth of a Royal Foundation…: What is ethical behaviour?

An invitation from the Mysore Palace is always considered special and the recipient feels elated and a tad proud of royal attention. This even when the royalty is only a memory in our Democracy. Among the royal families of India, Mysuru is considered one of the very few held in high esteem by the British.

The reason for ruminating on royalty is the invitation my office and I myself got for the launch of HH Sri Srikantadatta Narasimharaja Wadiyar Foundation by Sadhguru Jaggi Vasudev of Isha Foundation and N.R. Narayana Murthy, Founder and Chairman-Emeritus of Infosys as the guest of honour last Sunday at Jaganmohan Palace auditorium.

My wife and I decided that it would be a nice way to spend the Sunday evening by attending the function — glowering at the members of the royal family, the descendants of the last Maharaja of Mysore HH Sri Jayachamaraja Wadiyar.

The Foundation was a tribute to the memory of the only son of HH Sri Jayachamaraja Wadiyar, Sri Srikantadatta Narasimharaja Wadiyar, who died in the year 2013.  The Foundation with so many projects related to the restoration of old Palaces and Temples built by the erstwhile Kings and also service in the area of art and education is a tribute to the memory of Sri Srikantadatta Narasimharaja Wadiyar by his dowager Pramoda Devi Wadiyar.

Therefore, it is understandable how much thought, attention, imagination, love and emotion must have gone into the setting up of this Foundation. It was there for all to see. Pramoda Devi Wadiyar, while welcoming the guests, became deeply emotional and remained silent for nearly two minutes even as the audience fell into a silence waiting for her to break free from her emotional spell of speechlessness. I must admire the meticulous manner in which the function was organised. The backdrop of the stage was in consonance with the spirit of the Foundation. In short, there was a touch of class and royal beauty. However, to everybody’s surprise, the Jaganmohan Palace seemed its old self. As the VIPs were called to the stage, what intrigued the audience was the absence of Sadhguru on the dais. Only Narayana Murthy and the Trustees were on the stage while Sadhguru was sitting among the audience in the front row.  He was called to the stage only to light the traditional lamp to mark the launch of the Foundation and then he came down and resumed his seat among the audience.

Narayana Murthy was apparently conscious that the audience was eager to listen to Sadhguru and thoughtfully limited his prepared speech to a minimum. Thereafter, the stage was vacated for Sadhguru and Sadhguru alone. He sat on a special wooden bench with a backrest and arms. There was a huge flower pot to his left and a copper pot, I guess with water, to his right. Then began the talkathon! When the audience thought Sadhguru was done with his one-and-a-half-hour eloquent discourse in flawless English with great élan on subjects not related to the Foundation or its objectives, he volunteered to take questions from the audience.

I wondered what good it would do when everyone was in a hurry to go home, specially the elderly ones who had gone there at 5.30 pm. Four hours would be a painful experience for the physical body.

There was a moment of commotion and confusion when Narayana Murthy, among the rich and the famous, got up and suggested that the first question be from a lady followed by a man and in that order alternatively. Unable to understand the suggestion properly, one lady was on her feet to ask question even as another lady was asking her question. At this point, Narayana Murthy got up again apparently in a fit of rage muttering words that were rather embarrassing to the lady who was on her feet. I was sitting right behind him. He was heard saying that these youngsters do not know how to follow discipline. Let it be.

Incidentally, that lady was Mrs. Kalpana, who had earlier rendered an invocation so melodious to hear and soothing to our souls — music of the spheres. Angels above must have approved. However, she got her chance at last to ask her question.

The question was about spirituality and its nature. The answer was, of course, given and a tired audience couldn’t bother much about the spiritual when the physical was tired. And then came the question from Narayana Murthy, apparently making sure it was a man’s turn to ask the question. It was a loaded question for an easy answer. The question: Sadhguru, what is ethical behaviour?

The answer to Narayana Murthy’s question was in no way nearer to what I had read about ethics. The example given of traffic rules, to my mind, has nothing to do with ethical behaviour. It has only to do with a criminal act of violating rules.

Last night, I was reading a book by Shashi Tharoor, our newly-minted Congress MP from Thiruvananthapuram, Kerala. The title of the book is The Paradoxical Prime Minister — Narendra Modi and his India. Here he explains with a real life incident about the ‘Code of Ethical Conduct.’

It appears, Tharoor was elected to Lok Sabha in April 2009 and invited to join the UPA Government. He was coming to India and entering politics after a very long United Nations career. While at UN, he was serving a  number of institutions in an Advisory capacity.

He was appointed Minister of State (MoS) in the Ministry of External Affairs by the then UPA Government. However, immediately a request came from the Prime Minister’s Office (PMO) asking him to inform them of all such commitments and affiliations he was having with different institutions.

Shashi Tharoor says, he was holding positions in nine institutions in all because of the legacy of his earlier international life. He was a Trustee in a School of Law and Diplomacy, Advisor to the Red Cross etc. etc. He was even a patron of an Indian School in Dubai. The then Cabinet Secretary K.M. Chandrasekhar called on Shashi Tharoor and told him he would have to resign from all those positions if he wanted to take up the Ministerial position.

Tharoor told him that all these were unremunerated Advisory positions. But the Cabinet Secretary sent him a document that explained why he should resign. The document was the ‘Code of Ethical Conduct for the Council of Ministers’ adopted as long ago as 1950s and re-issued in the 1970s. Tharoor agreed and duly resigned from all his positions.  Dr. Manmohan Singh, UPA Prime Minister, enforced the Code of Ethical Conduct to his Ministers, including Shashi Tharoor. However, the NDA Government under Narendra Modi did not enforce the Code of Ethical Conduct when it came to power in 2014. Any exception to this Ethical Code would have to be authorised by the Prime Minister and Shashi Tharoor did not seek an exception.

According to the book, a controversy arose about the issue of enforcing the ‘Code of Ethical Conduct’ in November 2017 over four NDA Ministers — Nirmala Sitharaman, Suresh Prabhu, Jayant Sinha and M.J. Akbar — all serving on the Board of the India Foundation. But, unlike Shashi Tharoor, these four Ministers were not asked to resign from the Board of the India Foundation. This is one classic example of what is ethical behaviour and what is not. The UPA Government’s behaviour, according to the book, was ethical while that of the NDA was unethical. But I have a caveat here.

Now, Shashi Tharoor, being more loyal to the Nehru-Gandhi dynasty than Sonia Gandhi, does not tell us if those four NDA Ministers had sought and received the exception provided in the Code of Ethical Conduct from Prime Minister Narendra Modi ! “I did not seek an exception,” Shashi Tharoor confesses in the book. But why? He himself provides the answer which exposes him as a hypocrite. Apparently, he would have sought an exception but did not because “It was clear (to him) that on Dr. Manmohan Singh’s watch” it was not possible. A compliment to Dr. Manmohan Singh’s sense of ethics and proof that Shashi Tharoor is no Angel ! Right?

2 COMMENTS ON THIS POST To “Birth of a Royal Foundation…: What is ethical behaviour?”