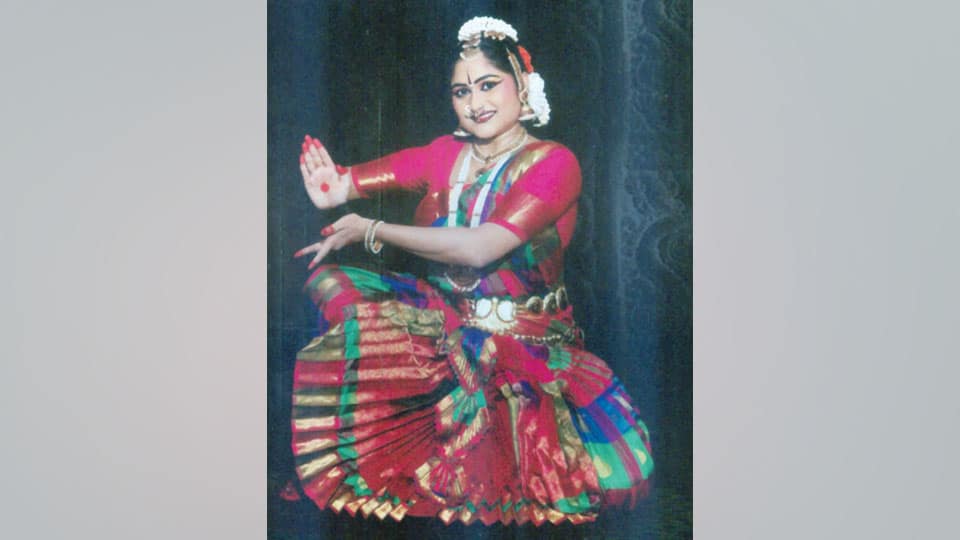 Mysuru: Bharatanatyam Rangapravesham of Bhuvaneshwari Praveen, a disciple Guru Vidu. Mithra Naveen, has been organised at Jaganmohan Palace auditorium in city on June 9 at 6 pm under the aegis of Nadavidyalaya Academy of Music and Dance and Ediga Family.

Bhuvaneshwari is the daughter Lakshmi and Eshwar of Bengaluru and daughter-in-law of Bhavani and Krishna Gowda, residents of Mysuru.

Academically, Bhuvaneshwari is a Diploma holder from MEI Polytechnic, Bengaluru and has completed her B.Tech degree from Birla Institute of Technology and Science (BITS) Pilani Work Integrated Learning Programme.

By profession, Bhuvaneshwari is working as a MEP Revit Co-ordinator in London, married to Praveen Krishna, a resident of Mysuru working in London as well. Bhuvaneshwari’s undying spirit of becoming a professional Bharatanatyam dancer has got fruitful after getting in touch with Guru Vidu. Mithra Naveen of Nadavidyalaya Academy, Mysuru.

Bhuvaneshwari continued her Bharatanatyam training through Skype video classes though being in London. Her dance skills are fine tuned and carved to poise by Guru Vidu. Mithra Naveen.

She has ably completed her Junior and Senior Grade Bharatanatyam Exams conducted by KSEEB under the guidance of Guru Vidu. Geetha Srinath of Navya Natya Sangama in  Bengaluru before marriage and now, Bhuvaneshwari is progressing towards her goals in Bharatanatyam, completing her pre-Vidwat dance exam and celebrating her Rangapravesham in the same year.

She has performed on many stages and bagged many prizes.

Bharatanatyam Bharatanatyam Rangapravesha Nadavidyalaya Academy of Music and Dance
Birth of a Royal Foundation…: What is ethical behaviour?
MANJARI unique dance recital at Ganabharathi on June 7