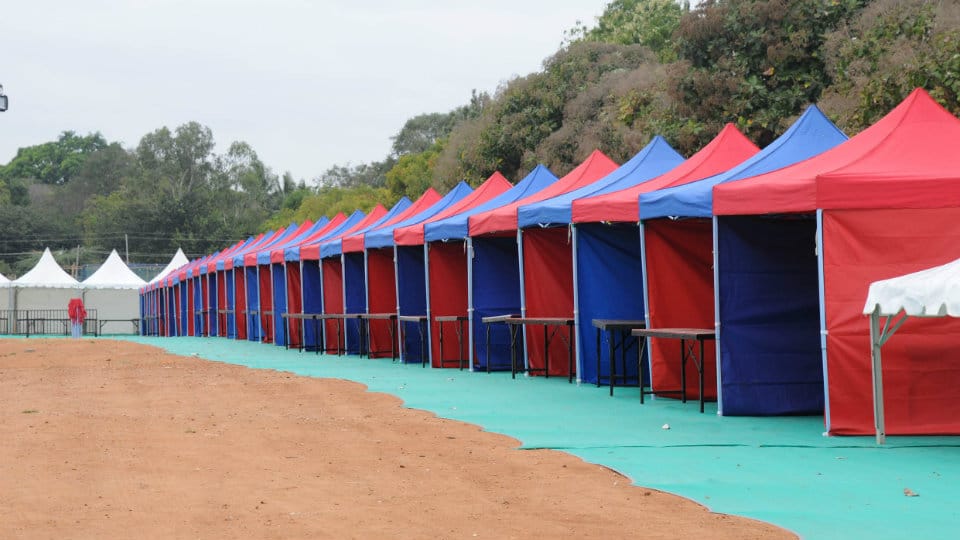 Every now and then we see many exhibitions being held in our city, especially at the Maharaja’s College Grounds or at the Bharat Scouts and Guides Grounds with an occasional one arriving at the JSS Urban Haat complex too.  These are a relatively recent trend and until this set in there was only the annual Mysore Dasara Exhibition which used to be the most sought after destination for every person living in or around the city. Since it used to be a month-long affair, it was a place which had to be visited at least three or four times. A single hurried visit to this exhibition could simply not do justice  to all that one wanted to see or buy there!

Yes there was much to see and much to buy there in those days. It is only now that there are no takers for the stalls there until our Dasara is almost over, with many stalls remaining vacant altogether till it is time for it to be wound up. Over the past few years, to mitigate the sorrow of the shop-keepers there who always complain that they have not made any profits, its tenure is often extended more than once. This measure too does nothing more than just mollifying them and encouraging them to come back the next year ! The sad truth is that today its once lofty stature has become reduced to the level of a village fair in which even villagers are not interested.

During its heydays this exhibition used to be the only place where you could buy some things which would simply not be available in Mysore during the rest of the year. This was especially so in the case of textiles, sarees, towels, bed sheets and quilts, each one of which would come from a particular region of the country. While the towels would come from Tamil Nadu, the bed sheets would come from handlooms in and around Solapur in Maharashtra. Now, both these uniquely rough-textured, daily use necessities used to be real work-horses, simply refusing to be worn down even with the roughest use all through the year till their owners out of sheer boredom bought new ones at the next exhibition! Block printed cotton dress material would come from Jaipur with unique Rajasthani motifs showing elephants, camels, peacocks or village belles with water-pots delicately balanced on their hips and heads! The sarees used to come from Kancheepuram if they were richly brocaded silks or from Andhra Pradesh if they were humble but hardy cottons. The quilts would come from Rajasthan if they were the thin, cotton filled ones meant for use during the greater part of the year or from Punjab if they were the heavy ones meant for winter use. The latter would be so effective in warding off the winter chill that for our not-so-cold Mysore winters they were actually an overkill! You’d have to kick them off in the middle of the night to fight the built up heat and cool down a little till you felt like tucking yourself into them once again!

The Mysore Sandal Soap stall was the place where most true-bred Mysoreans invariably bought their entire year’s quota because of the very attractive discounts offered just once a year.  During my childhood the only fascination of going to the Dasara Exhibition lay in showing off my skills at the air-gun shooting stalls and buying letter-pads and notebooks which I really did not need, at the Bhadravathi-based Mysore Paper Mills stall. This government owned brand had a Bison as its Brand Ambassador and the stall at the exhibition always used to have at its entrance, a realistic looking papier-mâché bison peeping out of a bamboo thicket ! My next destination used to be the Mysore Power Corporation Pavilion with its models of the Western Ghats, Jog Falls and the Sharavathi Power Generating Station. Surprisingly, these continued to fascinate me year after year although they remained absolutely unchanged over the years !

Coming back from the pages of my past to the present and to the real reason why I am writing today’s article, I feel that most of the exhibitions that are being held in our city now at places other than our Dasara Exhibition Grounds are rather unsafe. Most of these are held in pavilions made largely of highly inflammable cloth, canvas and wood. These enclosures with long, zig-zag passages have tightly packed stalls, again selling very combustible stuff like plastic goods, carpets, fabrics and furniture. Visitors have to per-force walk through the entire maze which has almost no quick access to safe exits. Most of us who go there do not realise that in case of a fire or even a stampede for some reason, these places can be virtual death-traps.

It is time we woke up to the real danger of the unforeseen happening at such venues and take precautions to see that all events where people congregate are held only in very safe places. An example of such a safe place is the JSS Urban Haat on the Ring Road which seems to have been created by the JSS Group keeping in mind the safety of all those who go there. I think our government should follow this example and create some more such places at convenient locations across the city. This place has ample parking space which is again one of the most important requisites for such a facility.

The stalls are well spaced out with wide open passageways all around them and in case of any commotion people can quickly disperse from the scene without the least difficulty. Every area has ramps making them accessible to those using wheelchairs and most importantly there are places where people can rest in the middle of their shopping. Incidentally, when you come to think about it you will realise that the greatest bane of almost all our modern day malls is that there are no places where you can sit down and rest for a while even if you feel like. They all seem to have been deliberately engineered to keep you on your feet all the time, with the only place where you can rest being the food courts where you will have to order something — indeed the pound of flesh you have to pay just for some rest and respite from all the walking and the spending!