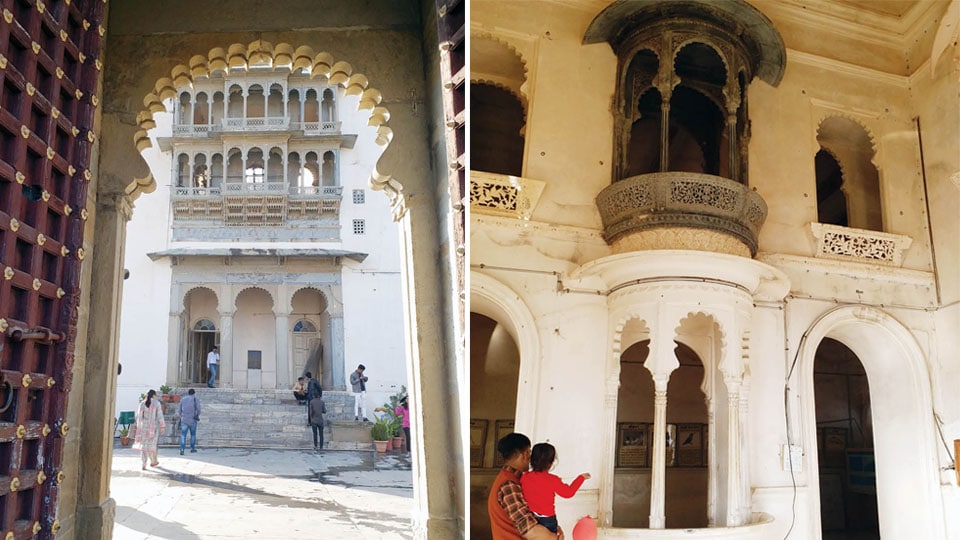 In my article of last Friday I said that Udaipur and Mysuru are similar because they are both cities of Lakes and Palaces. I would like to add here that they strike me as being similar for another reason. Amid the many Palaces that they have, they both also have two tiny Palaces; each perched on its own little hill, sadly sharing the same fate today !

We all know of the Rajendra Vilas Palace atop our Chamundi Hill which despite its great location has not been getting the attention that it richly deserves. This summer retreat of our Maharajas which has a blend of the Rajasthani and the Indo- architectural styles was built by Maharaja Krishnaraja Wadiyar at the highest spot of the Chamundi Hill where a much smaller building is said to have stood since the year 1822. Some sources say that the Maharaja used to have his early English and Philosophy classes in this Palace.

Much has been written in SOM in the recent past about the once glorious state and the present sad state of this royal abode. If my memory serves me right, KBG has written two full articles about this place. One was about his visits to the place along with his brother Dr. K. B. Subbaiah when it was being run as a high-end hotel by the ITC-Welcome Group and the second was about his interaction and discussion with the late Prince Srikantadatta Wadiyar about his plans to develop the place after he terminated the lease with the ITC-Welcome Group. KBG laments in his second article that the plans which the Prince projected seemed rather ill-conceived and far-fetched to him.  Not very surprisingly, the events that followed and the present sorry state of the once beautiful Palace have proved his doubts right.

Since I have also written about my impressions about the history and the grandeur of the place and my association with it, I will not dilate on this subject here today. It suffices if I say that its present state is something that pains all Mysureans who take pride in the glory and the rich heritage of their city and are keen that it retains them in the years to come.

READ ALSO  A Bridge too far?

Udaipur too has a hill-top royal abode; the Sajjangarh Palace which is very similar to our Rajendra Vilas.  Unlike the Rajendra Vilas, this is an incomplete Palace but the similarity is that this too is abandoned and desolate today. They can thus be called distant cousins in distress !  Like its slightly younger sibling, the Sajjangarh Palace was built in the year 1884 during the reign of Maharana Sajjan Singh, the seventy second ruler of the Mewar Dynasty. Like Krishnaraja Wadiyar, he too, had his coronation as a ‘Boy King’ at  a very young age but he ruled for a remarkably short period of just ten years between 1874 and 1884 before dying at the tender age of 27 exactly like his adoptive father Shambhu Singh. He built this Palace as a hunting lodge and also a place from which to watch the monsoon set in upon Udaipur.

Built of white marble on Bansdara peak of the Aravalli Hills surrounding the city of Udaipur, it commands a great panoramic view of the city and the Fathesagar Lake. Upon Sajjan Singh’s premature death, his successor Maharana Fateh Singh made some attempts to complete its construction but for reasons which are not very clear he abandoned them midway. Some say it was a cash crunch while others say that it was the scarcity of water at the place. But the result was that from the grandiose nine-storied edifice it was meant to be it was left in the much stunted form that we see it in today. It has many richly decorated marble pillars, balconies, towers and turrets which only seem very out of place in their isolation.

But what is noteworthy is that it has a unique rain water harvesting system which is way ahead of its time with huge underground sumps capable of holding nearly 2,00,000 litres of water. But the inclusion of this facility into its construction is not very surprising considering the fact that water must have been a much priced necessity at that elevation in a rain starved region before the era of mechanical pumps. This Palace too like the Lake Palace was one of the locales for the shooting of the movie Octopussy which I mentioned in my last article. Although Maharana Bhagvanth Singh in the year 1955 handed over the ownership and upkeep of this Palace to the Rajasthan Forest Department which has established the Maharana Sajjan Singh Forest Sanctuary in its environs, nothing much has been done to maintain the Palace except for leasing out a small verandah with its courtyard to run a coffee shop. If not for anything else it is a place that merits a visit just to see the magnificent sunset and the magical twinkling lights of Udaipur soon after !

There is an interesting story of how Maharana Sajjan Singh is said to have refused to accept the ‘Star of India’ award bestowed on him by Queen Victoria in the year 1881 as he felt that it was below his dignity to do so ! He reasoned that a senior representative of the descendants of the sun (The Suryavanshis) should not be demeaned by being decorated by a mere star ! Later, after much persuasion by his counsellors he is said to have relented and accepted the award as a token of affection and respect from one monarch to another, celebrating the event by a lavish dinner at Chittor to which he invited Lord Ripon the royal representative. So much for royal blood!