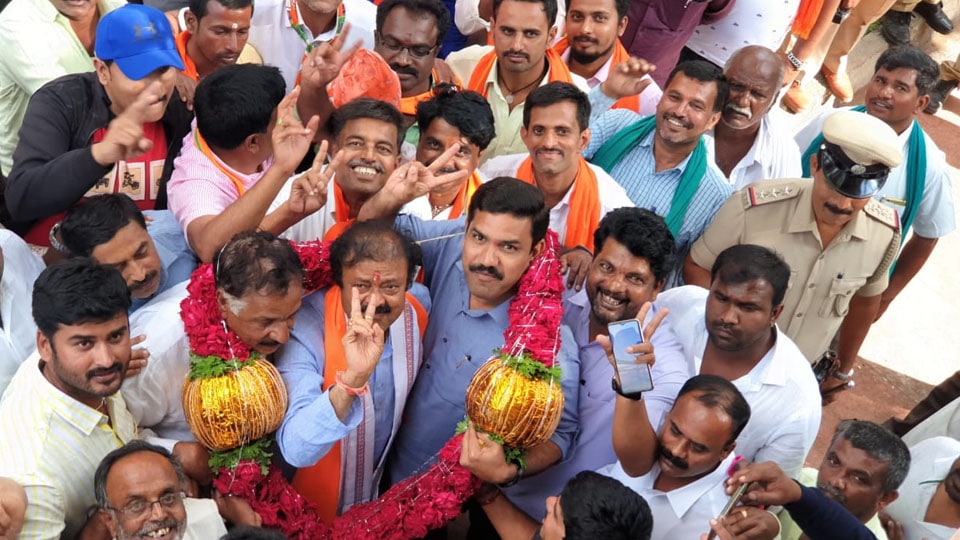 Counting of votes was taken up at the Government Polytechnic College on Channarayapatna Road at 8 am today. K.C. Narayanagowda defeated his nearest rival B.L. Devaraj of the JD(S) by a margin of nearly 10,000 votes, while Congress candidate K.B. Chandrashekar, a former MLA, came a distant third.

There were seven candidates in the fray, and barring the BJP, Congress and JD(S) candidates, all the four other contestants forfeited their deposit.

The by-poll was necessitated after Narayanagowda, who won on a JD(S) ticket in the 2018 Assembly polls, quit along with 16 other Congress and JD(S) MLAs in July, 2019, after accusing the then JD(S)-Congress coalition Government of neglecting them.

Narayanagowda along with the 16 other disqualified legislators later joined the BJP and contested the by-polls on a BJP ticket.

Now, with Narayanagowda’s victory, the BJP has opened its account in Mandya, much to the celebration of the party workers who had toiled hard to ensure the victory of BJP in K.R. Pet segment, in which Chief Minister B.S. Yediyurappa’s hometown Bookanakere comes.

As the counting began, it was a see-saw battle between Narayanagowda and his nearest rival B.L. Devaraj of the JD(S) and ultimately, Narayanagowda had the last laugh when he was officially declared the winner by a margin of 9,731 votes after 19 rounds of counting.

Narayanagowda secured 66,094 votes while B.L. Devaraj of the JD(S) 56,363 votes and K.B. Chandrasekhar of the Congress 41,663 votes. All the four other candidates fared poorly and lost their deposit. There were 748 NOTA votes.